June was a warm and dry month for most of us and for some it was record-breaking, with many seeing their warmest and driest June on record.

Throughout June high pressure dominated the UK weather bringing more than our normal share of fine sunny days with high temperatures and very little rainfall. Provisional statistics show it is one of the UK's top five warmest Junes (in records dating back to 1910) for both maximum daytime and mean (24-hour average) temperatures.

When looking at the mean temperatures it has been the warmest June on record for Northern Ireland and Wales and 4th warmest for Scotland and England.

Provisional statistics show it is one of the UK's top five warmest Junes (in records dating back to 1910) for both maximum daytime and mean (24-hour average) temperatures.

Looking ahead into next week, the chance of showers and thunderstorms decreases again and all parts of the UK will continue to have hot sunshine.

When looking at daytime temperatures the UK average for the month was 19.9 C, the same average maximum daytime temperature as in the June of the still talked-about summer of 1976, and placing it joint second (in records dating back to 1910) just behind 1940, when 20.6 C was reached.

It was the fifth sunniest for Northern Ireland and England, third sunniest for Wales and fourth for Scotland. 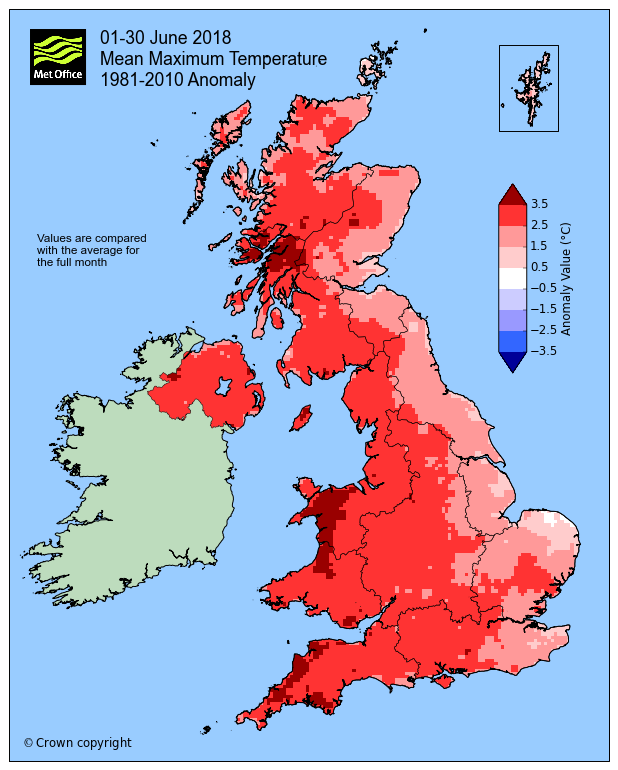 June was also a very dry month for much of the UK. For much of England and Wales it ranks within the top five driest Junes on record (figures dating back to 1910), with a record set in the 1920’s being broken for the South-east and Central Southern England region where 3.0 mm of rainfall was recorded, just 6% of what you would expect for the month as a whole.

However, Scotland saw the most rainfall (71.4 mm, 80% of average), with western Scotland just 6% short of the monthly average. Northern Ireland also had some rainfall (49.1 mm) with the country seeing 64% of what you would expect for the month as a whole.

However, these are provisional statistics and not all the data is in yet, so the rankings could change slightly over the coming weeks and months.

The prolonged hot weather has led to many stories in the media predicting drought conditions and water restrictions but Paul Hickey, Deputy Director and head of water resources at the Environment Agency said “A natural reduction in river flows and groundwater at this time of year is to be expected and water companies plan for warm months. There are no water use restrictions in place, however it is always helpful to follow water company advice and use water wisely. At this time of year the Environment Agency is always ready to respond to pressure on rivers caused by low flows and we continue to monitor the situation.”

The Environment Agency explained at the start of June that river flows and groundwater levels were normal for the time of year in most areas of England. They added low rainfall in the last week of June has meant river flows have decreased however half of rivers are at normal levels and groundwater supplies are still looking fairly healthy because they take longer to refill and be used up.

As we head through the start of July all indications are that much of the UK will stay dry and very warm with plenty of sunshine, although some showery conditions or a few thundery showers could be possible at times.

UV levels will continue to be high or very high during this warm and sunny spell, so people should take care when outside enjoying the weather.

You can check out the Met Office’s dedicated pollen forecast, or receive pollen alerts, via the Met Office mobile app, when counts are moderate or higher.

You can find the current forecast for your area using our forecast pages, by following us on Twitter and Facebook, or using our mobile app which is available for iPhone from the App store and for Android from the Google Play store.