A scientific study has given an initial view of potentially significant changes in rainfall patterns across northern England and Scotland by 2100.

An experimental approach using the Met Office Unified Model with a resolution of 1.5km provides a first look at changes in rainfall that could affect Scotland and northern England in both summer and winter several decades into the future. The 1.5km model allows us to look at changes in hourly rainfall at kilometre scales, not captured by traditional climate models.

The study ― published in the journal Climate Dynamics ― showed that during winter daily average rainfall would increase at the end of the 21ˢᵗ Century for most parts of northern Britain, assuming a pathway leading to high greenhouse gas emissions ―.the so-called: RCP8.5 pathway.

In contrast, summer daily average rainfall is projected to see large decreases across northern Britain, with many areas ― including the Central belt of Scotland ― experiencing a reduction of 25―50%. 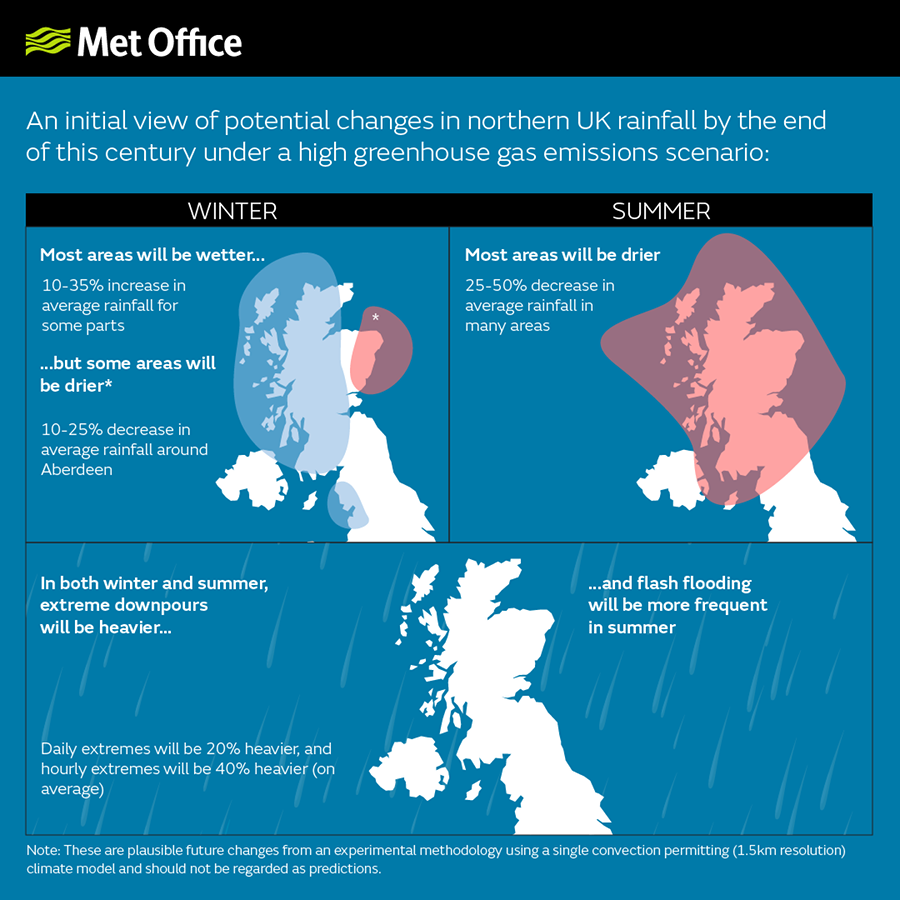 Steven Chan, a visiting scientist with the Met Office Hadley Centre, is the paper’s lead author. He said: “Developing an improved understanding of rainfall patterns until the end of the century is vital as it allows governments to plan for potential impacts of drought or flooding events.”

It only uses one model, so is not able to assess how likely the results might be – but it does provide an initial look at the type of changes to rainfall patterns that are possible if the world continues on a high greenhouse gas emissions pathway.

Later in the year, the UKCP18 project will build on the approach used in this study while additionally looking at a spread of potential outcomes and how likely they are to occur. This will provide a new tool to inform the decisions of policy makers and planners.

For winter, the current study suggests a projected rainfall increase of 10―35% in parts of the Scottish Central Lowlands, the western Scottish Highlands and the Lake District. However, a decrease of 10―25% is projected around Aberdeen.

The 1.5km-model shows a larger increase in extreme precipitation over the northern UK (by about 20%) compared to a 12km-model in summer, but a similar increase to the 12km-model in winter.

This supports the result found previously for the southern UK that increases in summertime extremes may be higher than predicted by coarser-resolution conventional climate models.

The paper ― Projected changes in extreme precipitation over Scotland and Northern England using a high-resolution regional climate model ― is a collaboration between scientists from the School of Engineering, Newcastle University, Newcastle upon Tyne, and the Met Office.

The simulations were supported by project NUTCAT2050, which seeks to understand how climate change may impact plant nutrient transport.