The Met Office and Met Éireann, today reveal the list of storm names for the coming season.

First introduced in 2015, this is the fourth year the Met Office and Met Éireann (the meteorological service in the Irish Republic) have jointly run the ‘Name our Storms’ scheme, aimed at raising awareness of severe weather before it hits. 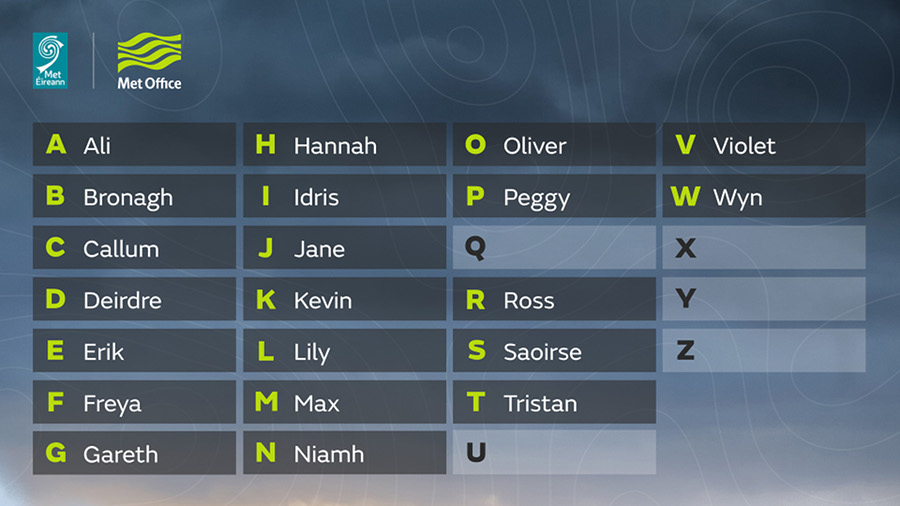 Evelyn Cusack, Head of Forecasting at Met Éireann, said: “The last 12 months have seen some extreme weather around the Globe as well as here at home. While it is too early to say whether the coming winter will be a stormy one or a quiet one we are prepared with a whole new set of 21 names for whatever nature may throw at us. As before, Met Éireann forecasters will work in close co-operation with our colleagues from the  Met Office in the UK to keep all the peoples of these islands warned of impending severe weather."

This season’s names have once again been compiled from a list of suggestions submitted by the public, choosing some of the most popular names but also selecting names that reflect the nations, culture and diversity of Britain and Ireland.  As in previous years, Q, U, X, Y and Z will not be used, to comply with the international storm naming conventions.

Why do we name storms?

Derrick Ryall, Head of Public Weather Services at the Met Office, said: “Naming storms has been proved to raise awareness of severe weather in the UK, providing a consistent message to the public and crucially prompting people to take action to prevent harm to themselves or to their property.”

In a recent YouGov survey, almost 80% of people questioned found giving storms a name useful for making them aware that the storm may have greater impacts than normal, with 63% agreeing that storm naming was useful to let them know to take action and prepare for the impacts of severe weather.

Although naming storms has helped raise the profile of severe weather, we realise there is still work to be done in advising people to take action – for example in a recent survey, only one third of respondents said they made changes at home, such as fastening windows, securing loose items outside and just one fifth checking on the safety of family and neighbours.

When is a storm named?

A storm will be named on the basis of 'medium' or 'high' potential impacts from wind but also include the potential impacts of rain and snow, i.e. storms will be named for weather systems which we expect an Amber or Red warning will eventually be issued by Met Éireann and/or the Met Office’s National Severe Weather Warning Service (NSWWS).

Find out more about these storms and more on our UK Storm Centre pages.