An Amber National Severe Weather Warning for rain has been issued with heavy rain expected in the Pennines on Thursday.

Accumulations of up to 100mm are possible within the warning area which could cause significant disruption.

A wider area to the east of Manchester covering Leeds, Sheffield, Lincoln and as far north as Middlesbrough is under a Yellow weather warning where rainfall totals could widely reach 20-40mm with 60-40mm possible over high ground. There is a further separate Yellow warning for rain in north Wales. 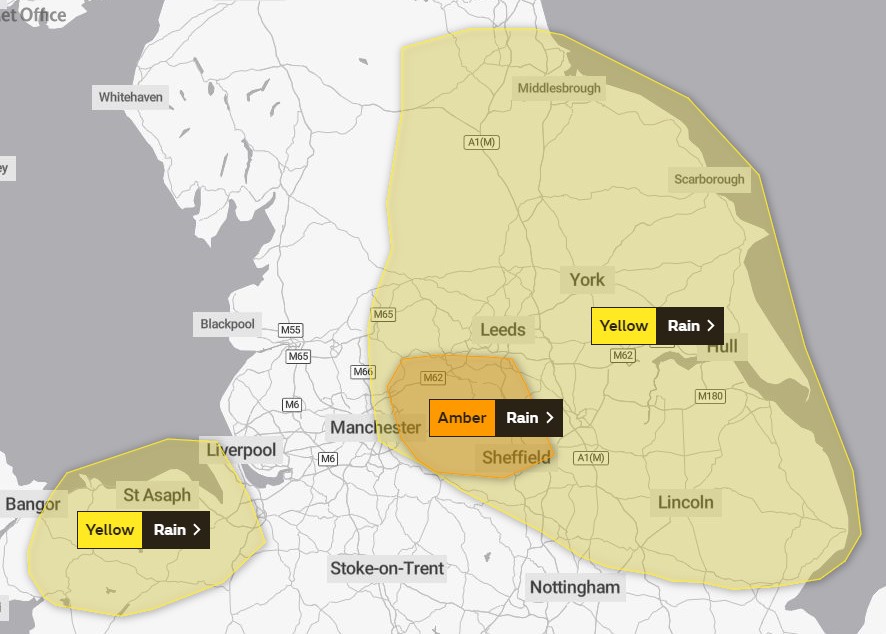 Chief Meteorologist Neil Armstrong said, “With a weather front from the latest low-pressure system effectively stalling over the north of England there will be a period of heavy and sustained rainfall through Thursday in the north of England. With the possibility of up to 100mm of rain falling on already saturated ground there could be some significant disruption.

“A strengthening north-easterly wind will make it feel even more unpleasant. Take extra care if you are travelling and keep up to date with the Met Office forecast for the latest information.”

The warnings cover both the morning and evening rush hours, with transport expected to be disrupted. RAC spokesperson Simon Williams said: “Drivers in the worst affected areas will need to exercise caution as visibility will be severely reduced while stopping distances are likely to be greatly increased. The best advice is to slow down and leave more space behind the car in front to give more time to react to anything that might happen.

“If you encounter any floods be very conscious of not driving through water that is too deep as this could very easily lead to catastrophic damage. Try to assess the depth by looking at the kerb or road signs and, if you decide it’s safe to go through, drive at a steady speed so as not to create a bow wave, and try to use the highest part of the road. If there is any doubt, then it’s probably best to turn around and take another route.”

The rain will eventually ease overnight into Friday, with a much drier and brighter day to follow for much of the UK. Further rain will move in from the west on Saturday morning before conditions improve again through the day on Sunday.