A paper published in the Royal Meteorological Society’s journal Weather later today [Thursday 7 November 2019] looks at the drivers of last year’s UK heatwave, which led to the joint warmest summer on record (along with 2006).

The Met Office authors found that meteorological conditions - including large-scale weather patterns over the North Atlantic and Europe and high sea-surface temperatures close to the UK - resulted in the extended spell of hot and sunny weather. However, the observed record-breaking temperatures for the summer overall could not be fully explained by these conditions alone, and also needed to factor in additional warming from climate change.

Dr Mark McCarthy is the lead author of the paper and the head of the Met Office’s National Climate Information Centre. He said: “The UK has always endured weather extremes, including heatwaves, and there is no doubt that summer 2018 would always have been a notable period. However, our study found that climate change also added to the intensity, making it an even more dramatic year.

“In a UK temperature series extending back to 1884, the summer of 2018 was the joint hottest summer in the record. Bringing together multiple strands of evidence from observations and numerical simulations, our analysis shows that a UK summer temperature comparable to extreme summers like 2018 or 1976 now has a likelihood of 11-12% of occurring in any given year, which is 30 times more likely than would be expected from natural factors alone.”

The latest set of Met Office projections of future UK climate change also suggest that these summer temperatures could be normal by the 2050s.

The paper observes that the northern hemisphere summer of 2018 saw high temperature records being challenged or broken across parts of western Europe, central Asia and North America.

June 2018 was exceptionally dry across central and southern England, with some locations near London recording little or no rain for a 57-day period. The lack of rain led to drier soils which increased the high maximum temperatures in south-east England during late July.

The oceanic and atmospheric conditions over the North Atlantic are identified as important influences on the northerly location of the jet stream and consequent dominance of high-pressure systems over western Europe during summer 2018. Furthermore, elevated sea-surface temperatures around the UK coast, and dry soils resulting from lack of rain, also contributed to higher temperatures over land. But these factors alone accounted for around half of the observed temperature anomaly of last summer, with a similar magnitude influence from climate change. 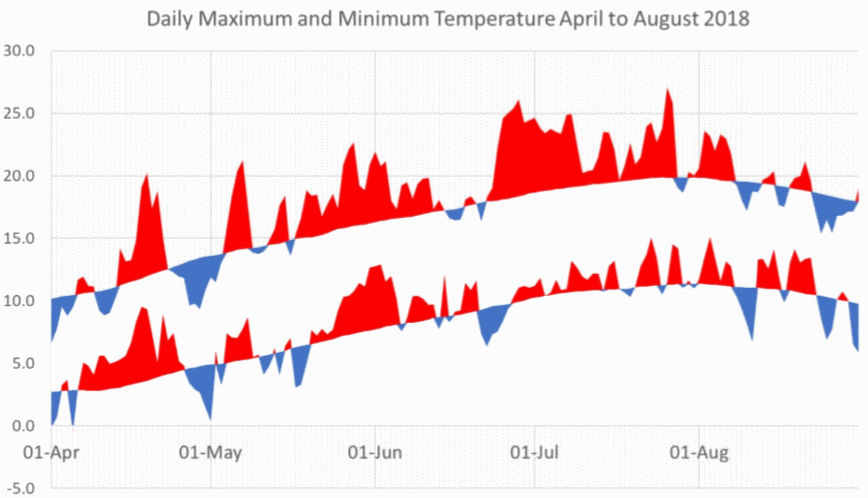 Figure 1: UK average daily maximum and minimum temperature during April to August 2018. Each curve is shaded with respect to values being (red) above or (blue) below the 1981-2010 climatological average.

The UK 2018 summer heatwave in context

Dry and sunny weather dominated across the UK from May 2018 through to early August. The mean air temperature during the meteorological summer (June, July and August) was the joint highest on record. The summer was exceptional overall but the peak of the heatwave was not as intense as in some other notable heatwave years including most recently the summer of 2019 that saw a short spell of exceptionally high temperatures in late July, leading to the UK’s highest recorded temperature of 38.7 °C at Cambridge University Botanic Gardens on July 25.

The paper has been published in the Royal Meteorological Society journal Weather and can be read here.