Met Office and Met Éireann, along with new partner KNMI, have today revealed the list of storm names for 2019-20.

First introduced by the Met Office and Met Éireann (the meteorological service in the Republic of Ireland) in 2015, the Name our Storms campaign has helped raise awareness of the potential impacts of severe weather in Britain and Ireland before it hits.  Now in its fifth year, Met Office and Met Éireann are joined by the Royal Netherlands Meteorological Institute (KNMI), the Dutch national weather forecasting service.

Earlier this summer Met Office and Met Éireann received thousands of suggestions from the public after asking people to send in ideas for future storm names.  Working with Met Éireann and KNMI, the list for 2019-20 has been compiled from these suggestions, choosing some of the more popular names along with names that reflect the three nations diversity. 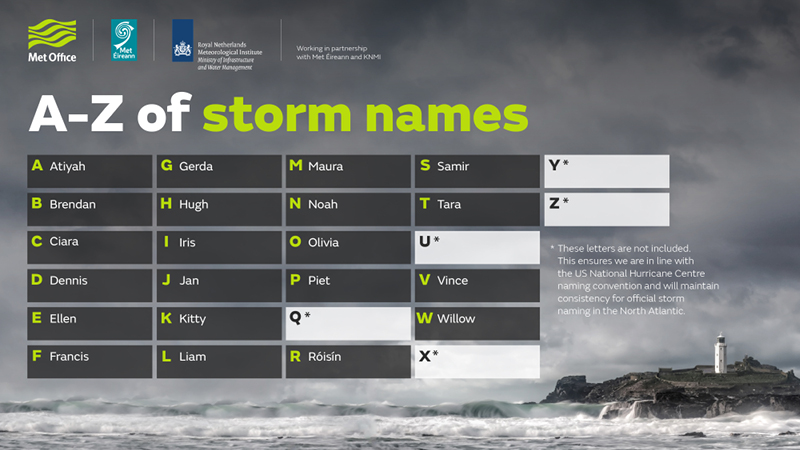 “We are looking forward to working closely with the UK Met Office and Met Éireann.  Storms are not confined to national borders, so it makes sense to give common names to such extreme weather events. As many people are travelling - sometimes on a daily basis - between our countries, the use of common names will make it a lot easier for them to appreciate the hazards represented by a large storm system.  For us at KNMI, it is a great privilege to work more closely with our colleagues from Ireland and the UK in communicating the impacts of severe weather.”

Evelyn Cusack, Head of Forecasting at Met Éireann, said: “The naming of storms by National Met Services as well as colour coding weather warnings provides a clear, authoritative and consistent message to the public and prompts people to take action to prevent harm to themselves or to their property.

“We are overwhelmed with the huge response to our public call for storm names - please don’t be too disappointed if your name hasn’t been used as you will get another chance next year”.

Derrick Ryall, Associate Director of Public Weather Service at the Met Office said: “We were delighted with the public response to our call for names earlier this year and are really pleased storm naming has been embraced by press, media and public to better communicate the potential impacts of severe weather so people are better prepared, when it matters.

“Now coming into the fifth year of the Name our Storms campaign, we look forward to continuing our successful relationship with Met Éireann, our partner in Ireland and are delighted to welcome our new partners from KNMI.”

To find out more about Name our Storms you can visit the Met Office Storm Centre website.