Find out the latest information about storms in the UK as we name them as part of our Name our Storms project. 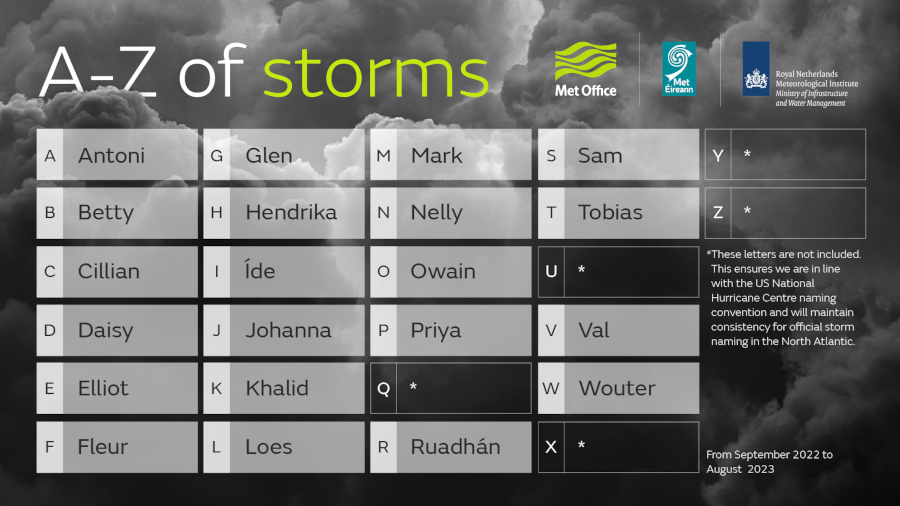 Throughout the year these pages will provide the latest updates and information as we name storms which we forecast will have an impact upon the UK.

When do we announce new storm names?

Since Name our Storms first launched in 2015 we have issued a new list of names each September. The list runs from early September to late August the following year. This coincides with the start of autumn when the likelihood of low pressure systems and the potential for named storms increase.

Why are we naming storms?

The naming of storms using a single authoritative system should aid the communication of approaching severe weather through media partners and other government agencies. In this way the public will be better placed to keep themselves, their property and businesses safe.

Can I suggest a storm name?

A new list of names will be compiled jointly between Met Éireann, the Met Office and KNMI (The Dutch national weather forecasting service).

The Met Office component will make use of suggestions submitted via the online form, although everyone is also welcome to suggest names for future consideration via email to [email protected]

When is a storm named?

The criteria we use for naming storms is based on our National Severe Weather Warnings service. This is based on a combination of both the impact the weather may have, and the likelihood of those impacts occurring.

A storm will be named when it has the potential to cause an amber or red warning.

Other weather types will also be considered, specifically rain if its impact could lead to flooding as advised by the Environment Agency, SEPA and Natural Resources Wales flood warnings. Therefore 'storm systems' could be named on the basis of impacts from the wind but also include the impacts of rain and snow.

How is a storm named?

When the criteria for naming a storm are met, either the Met Office, Met Éireann or KNMI can name a storm.

We then let the public, our partners in government and the responder community and the media know through various routes including publishing details on our website and social media channels.

To ensure we are in line with the US National Hurricane Centre naming conventions, we are not going to include names which begin with the letters Q, U, X, Y and Z. This will maintain consistency for official storm naming in the North Atlantic.

How are storm names chosen?

We receive thousands of suggestions throughout the year from the public and this years list has been compiled from these public suggestions, plus suggestions from Met Éireann and KNMI, choosing some of the more popular names and names that reflect the diversity of the UK, Ireland and the Netherlands.

UK and US Storm names?

To avoid any confusion over naming, if a storm is the remnants of a tropical storm or hurricane that has moved across the Atlantic, the well-established method of referring to it as, e.g. 'Ex-hurricane X' will continue.

We will only use names that have been officially designated by the National Weather Service in the US.

Do other countries around the world use a similar system? 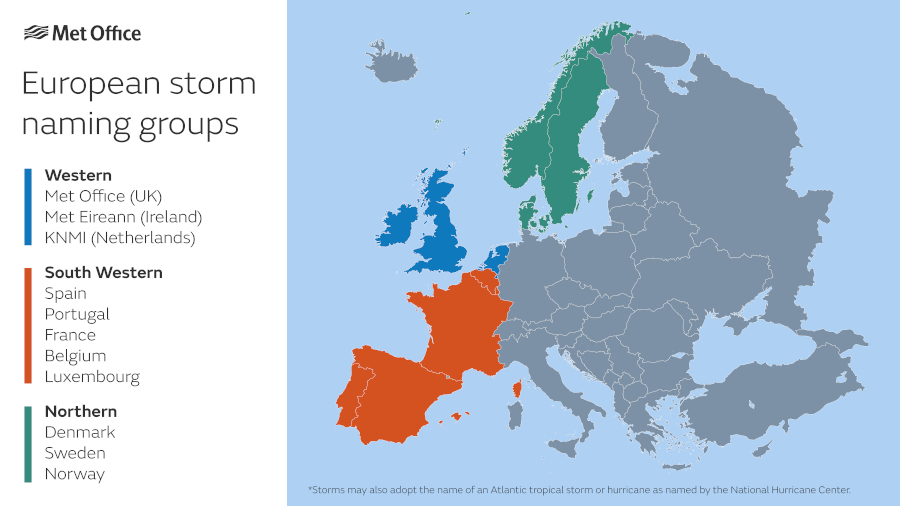 Are we having more storms?

Stormy weather is not unusual in the winter and we only need to go back to the winter of 2013-14 to see a similarly stormy winter. Overall, the period from mid-December 2013 to mid-February 2014 saw at least 12 major winter storms, and, when considered overall, this was the stormiest period of weather the UK has experienced for at least 20 years.

We have seen comparable or more severe storms in recent years, including 3 January 2012 and 8 December 2011, each of which caused widespread impacts.