The numbers of people in regions across the world affected by extreme heat stress – a potentially fatal combination of heat and humidity – could increase nearly 15-fold if the world’s temperature rise reaches 2°C.

At the new temperature - according to new figures and a map from the Met Office - the number of people living in areas affected by extreme heat stress rises from 68 million today to around one billion. A 4.0°C rise could see nearly half of the world’s population living in areas potentially affected.

The indicator used for this assessment of a wet-bulb globe temperature above 32.0°C (see definition below*) is part of the international standard for measuring heat stress in working environments. Above these levels, increased rest time is recommended per hour in order to avoid heat exhaustion. 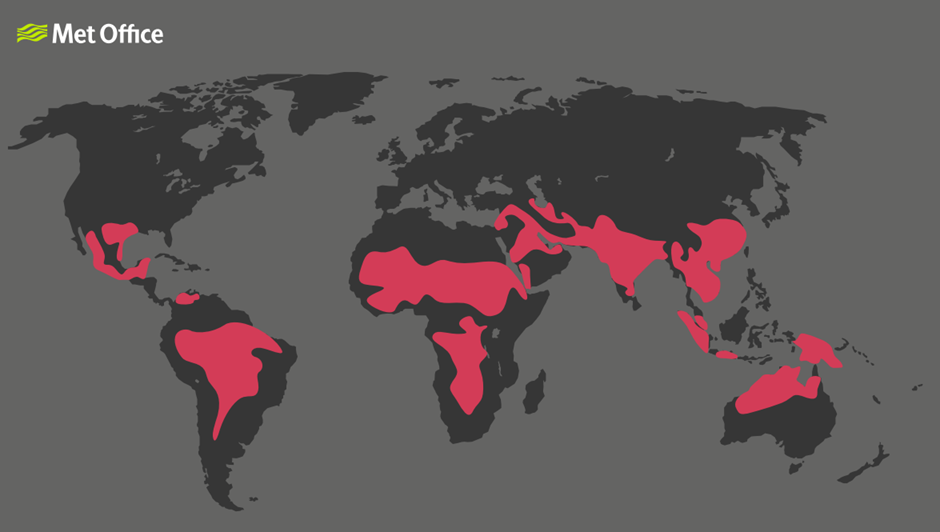 The map shows areas where a wet-bulb globe temperature greater than 32.0°C occurs for more than 10 days per year at 4.0°C global warming, in the ensemble mean of models from the 5th Coupled Model Intercomparison Project (CMIP5).

Dr Andy Hartley, Climate Impacts Lead at the Met Office, said: “Above this level people are defined as being at extreme risk. Vulnerable members of the population and those with physical outdoor jobs are at greater risk of adverse health effects. Currently, the metric is met in several locations, such as parts of India, but our analysis shows that with a rise of 4.0°C, extreme heat risk could affect people in large swathes of most of the world’s continents.”

The findings are revealed as part of a series of maps showing regions affected by five different effects of climate change at 2.0 °C and 4.0 °C. The others are: river flooding; risk of wildfire; drought; and food insecurity. 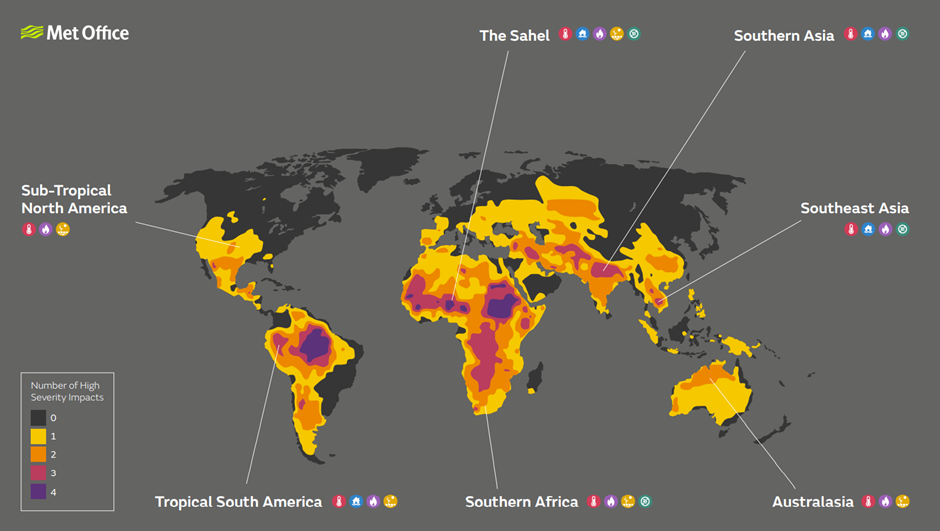 The maps of drought, flood and heat-stress risks are from research by a large international team in the EU-funded project HELIX (High End cLimate Impacts and eXtremes) www.helixclimate.eu, led by the University of Exeter. The Met Office team did further analysis for the UK government to assess where the most severe projected impacts overlap with each other and with the regions currently most vulnerable to food insecurity.

Prof Richard Betts MBE of the University of Exeter and Met Office, who led the HELIX project, said: “This new combined analysis shows the urgency of limiting global warming to well below 2.0 °C. The higher the level of warming, the more severe and widespread the risks to people’s lives, but it is still possible to avoid these higher risks if we act now.”

Dr Andy Wiltshire, Head Earth System and Mitigation Science, added: “Any one of the climate impacts presents a scary vision of the future. But, of course, severe climate change will drive many impacts, and our maps show that some regions will be affected by multiple factors.

“Perhaps unsurprisingly, parts of the tropics are most affected with countries like Brazil and Ethiopia potentially facing impacts from four of the hazards. Rapid emission reductions are required if we are to avoid worst consequences of unmitigated climate change.”

Prof Albert Klein Tank is director of the Met Office Hadley Centre. He concluded: “These maps reveal areas of the world where the gravest impacts are projected to occur with higher levels of global warming. However, all regions of the world – including the UK and Europe - are expected to suffer continued impacts from climate change.”

(*) Human heat stress risk depends on both temperature and humidity, and is indicated using wet bulb globe temperature (WBGT). WBGT above 32.0°C is defined as “extreme risk”. At this level, vulnerable members of the population, and those with physical, outdoor jobs are at greater risk of adverse health effects.