September 2021 was second warmest on record for the UK, with Northern Ireland having its joint warmest September on record.

Scotland had its second warmest, Wales its third and England its joint third, according to provisional figures released by the Met Office.

Mean temperatures for all the UK nations were around two degrees Celsius above their long-term averages for the month, with similarly high figures reported for both the daily maximum and minimum average temperatures.

Just a month from hosting vital climate change talks at COP26, the City of Glasgow recorded its joint hottest September on record, with 14.9°C matching 2006’s figure*. This follows on from Glasgow also reporting its hottest summer on record last month. 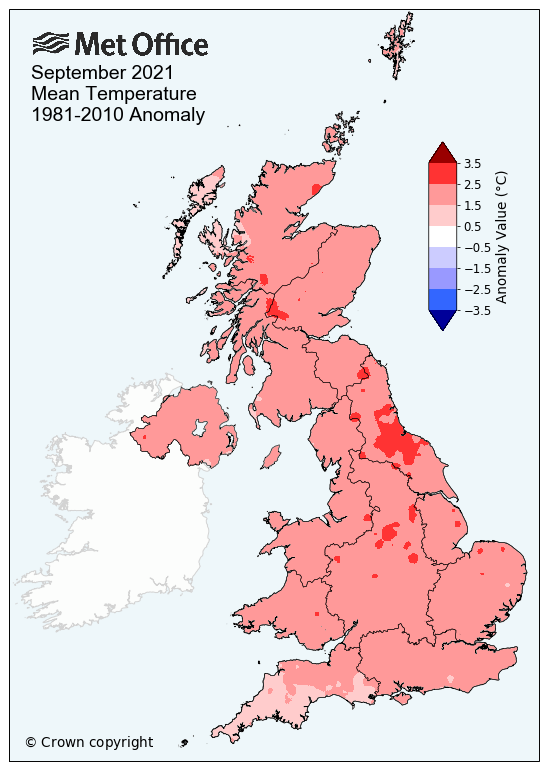 The significantly warmer-than-average month comes on the back of a more subdued August, as reported last month, when temperatures were much closer to long term averages.

September’s mean temperature of 14.7°C for the UK was actually quite close to August’s figure of 15°C. The significantly warmer than average September was actually only slightly cooler than an average August.

Also noteworthy is that Northern Ireland, despite seeing its joint warmest September on record, was particulalry dull with sunshine hours for the month the lowest since 1965 with an average of just 74.3 hours of sunshine. This puts it as the third dullest September on record for Northern Ireland. The record was set in 1962 when just 73.6 hours of sunshine were recorded. 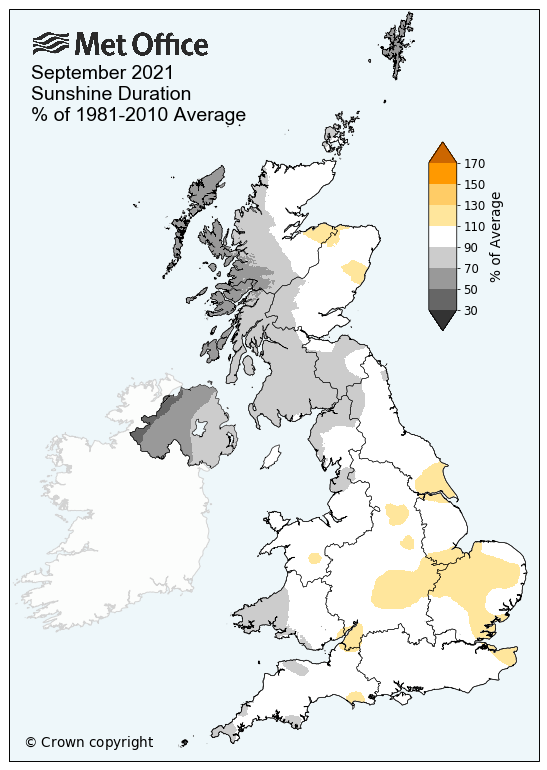 Individual daily temperature extremes were significantly above average on 7th and 8th of September, with Plymouth (27.2°C), Eskdalemuir (27.1°C) and Balmoral (25.8°C) all seeing their highest temperatures ever recorded in September, with observations from these locations going back over 100 years.

Wales also topped 30°C in September for the first time since 1961, as three stations in Dyfed got over the threshold on 7 September, although they weren’t close to breaking the all-time September temperature record in Wales set at Hawarden Bridge on 1 September 1906, with 32.3°C.

Although the heat waned slightly, temperatures remained above average for a good portion of the month, before a shift to more typically autumnal weather in the last week of September, which brought with it some more persistent rainfall.

Rain late in the month for much of the UK has helped to elevate the average rainfall figure to 78.8mm, but this is still just 82% of the average rainfall for September. Western areas saw more of the rain, especially in Northern Ireland and Wales, but even in these areas, rain was slightly below average but drier conditions were found in northern England and some parts of the southeast. No nation saw above average rainfall, but Northern Ireland had 93% (85.3mm) of its average, Scotland 78% (105.1mm), England 81% (56.6mm) and Wales 99% (115.1mm). 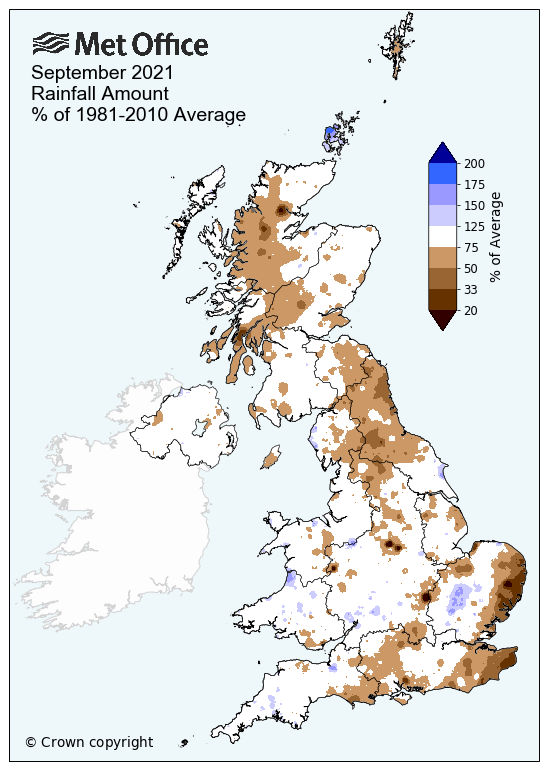 Dr Mark McCarthy, head of the Met Office’s National Climate Information Centre, said, “September has been an exceptionally warm month for the UK, with a notable September warm spell at the start of the month, followed by persistent above average temperatures until the conditions changed right at the end of the month.

“Interestingly, the exceptionally warm start of the month at one time threatened to push September’s average temperature figures above August’s, but the recent unsettled weather and drop to more average conditions have driven the figures slightly below August’s, but still well above the long term average.

“High pressure dominated for much of the early part of the month, which brought with it warm, sunny spells and calm conditions. Although that particularly warm heat subsided, temperature remained above average for a good portion of the month, before a more unsettled breakdown late in the month and more low pressure systems moving in to the UK.”

*Note: The data for the City of Glasgow is compiled from a gridded dataset across the administrative area of Glasgow and so may differ from the values reported from individual weather station located in and around Glasgow.