Autumn 2021 was the warmest on record for Northern Ireland and third warmest for the UK according to provisional figures released by the Met Office.

For Northern Ireland, Autumn’s figures continue a spell of often unusual heat or warmth, following its third warmest Summer on record, during which they broke their all-time temperature record with 31.3°C recorded at Castlederg during July. 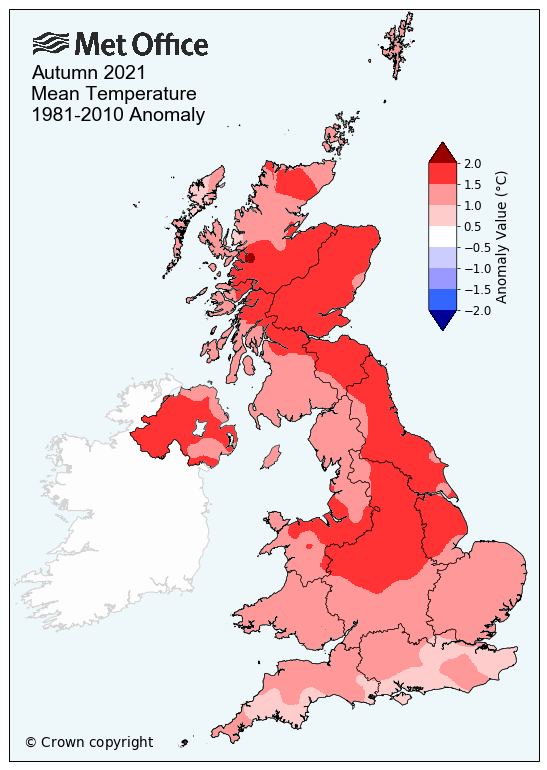 Rainfall amounts for Autumn were slightly below average, especially in the south, although not markedly so as drier conditions in September and November were largely offset by the wetter than average October. The UK had 93% of its average rainfall across the period. Areas that crept above their Autumn averages for rainfall were generally in the north, with Orkney reporting over a third more than its average rain for the period, with 480.6mm of rain. 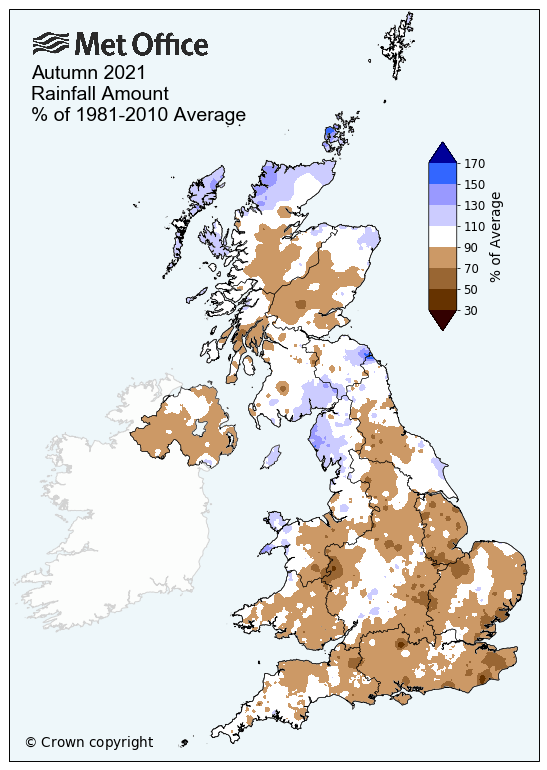 Sunshine hours for the UK overall have been near-average for the period, with slightly sunnier conditions in eastern England contrasting with duller conditions across Northern Ireland and the northwest of Scotland. Northern Ireland’s 194.3 hours of sunshine in Autumn meant it was the region’s dullest Autumn since 1946 and second dullest overall. The average sunshine in Autumn for Northern Ireland is 251.5 hours. Scotland also had its fifth dullest Autumn, with 188.4 hours, which is well below their average for the period of 225.3 hours. 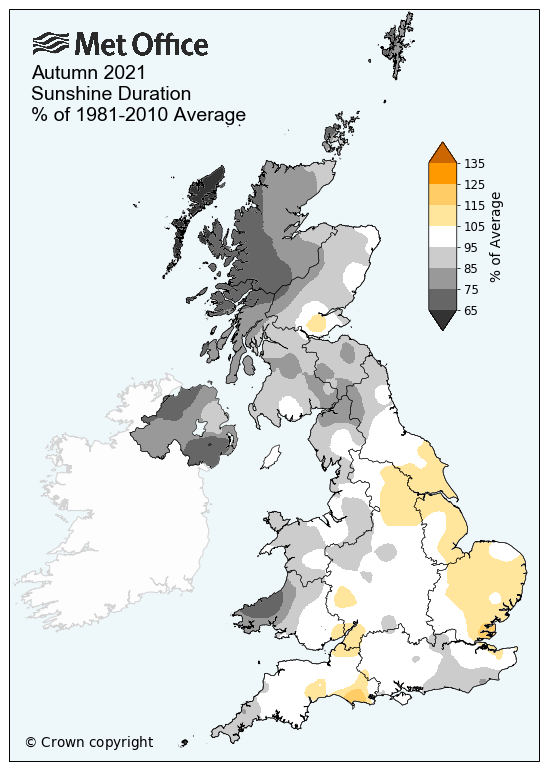 Dr Mark McCarthy of the National Climate Information Centre said, “Despite the season concluding with some snowy weather, Autumn 2021 has been very warm overall, with only a few short cold spells interrupting what has been a very mild three-month period.

“England, Wales, Northern Ireland and Scotland all reported Autumn mean temperatures within their top five ever recorded, which highlights just how mild this period has been. What’s particularly noteworthy is how Northern Ireland has maintained its theme of reporting generally above average temperatures, having also had that record-breaking summer for heat earlier in the year.

“Overall, rainfall figures levelled themselves out over the period, after a fairly dry September was followed by a rather wet October and a slightly dry November.”

Dry November for most

November will be chiefly remembered for the impacts of Storm Arwen, which triggered a rare Met Office Red weather warning for wind late on in the month. This coincided with some rain, sleet and snow, especially over the high ground in the north.

Despite that late-month flurry of rain and snow, November was a dry month for most, with the UK seeing 63% (74.9mm) of its average, the exception being the far north of Scotland. As is usually the case, Scotland led the way in terms of rainfall for the UK, but even here rainfall was below average overall, with 84% (137.3mm).

Areas to the south were particularly dry, with England seeing its driest November since 1956, and the tenth driest November overall, with an average of 39mm of rain. Wales also provisionally reported less than half of its average rainfall for November, with 69mm. 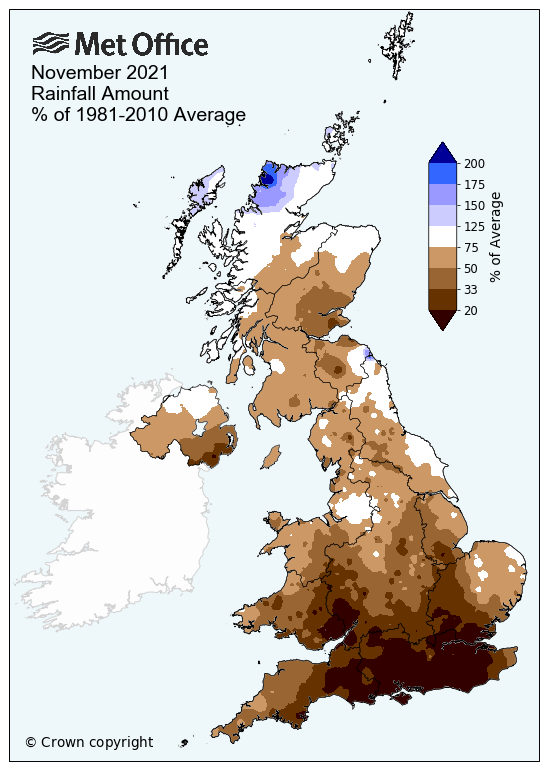 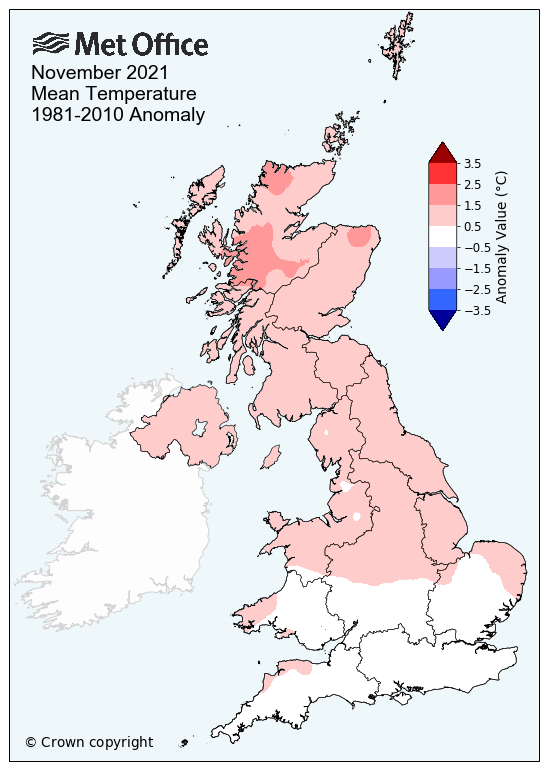 Northern Ireland saw its third dullest November on record in terms of sunshine hours, with 33.9 hours, compared with the record low of just 30.3 hours seen in November 2007. 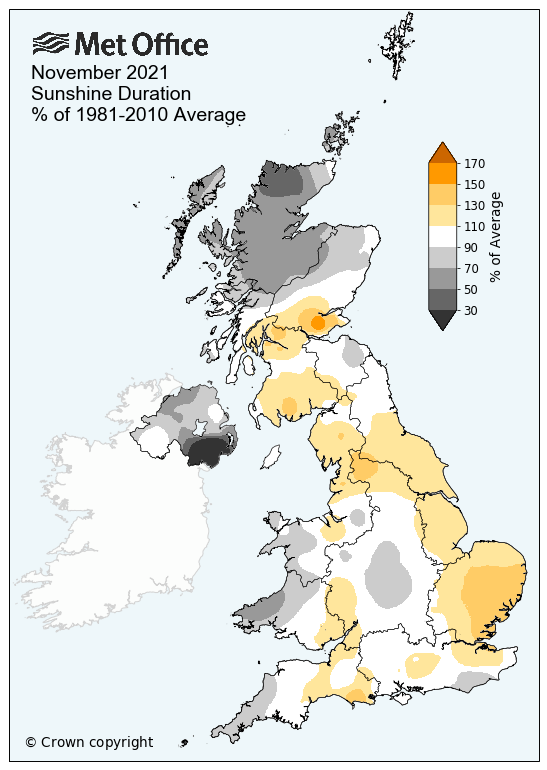 Snow falling, and for some regions lying on the ground, is not unusual for a few days in November, particularly towards the end of the month across northern and upland regions especially. This month saw a wide coverage of snow across Scotland and England, with snow reaching as far south as Bognor Regis.

Snow falling on the south coast in November is not very common and even rarer for it to remain on the ground there. The greatest depth of snow recorded during the event was 18cm at Middleton, Derbyshire on 27 November but that does not threaten the extreme highest November snow depth of 58cm recorded at Balmoral on 30 November 2010.

“Although many will remember November for the impacts of Storm Arwen, particularly in the northeast, the month as a whole has been fairly dry in many areas, with slightly above average temperatures for the period as well,” said Dr Mark McCarthy.

“A mild and dry month are the main takeaways from November 2021, with the exception of the far northwest, which had above average rainfall.”