Using an established rapid attribution methodology, Met Office scientists have calculated that the chances of a record breaking June monthly temperature across western Europe have become over 10 times more likely in just 20 years.

Projections for the future

In addition, by using climate projections, the team were able to calculate that unless action is taken to reduce greenhouse gas emissions globally, by 2100 in a medium emissions scenario (SSP2 4.5) heatwaves of the magnitude recorded in 2003 could happen every two to three years. In a natural climate, where human greenhouse gas emissions are removed, June temperatures like that of 2003 would only be seen once every 8,200 years.

The study commenced as western Europe recorded notably high temperatures for the time of year, with France recording its earliest 40°C in the year on record.

Met Office Climate Change Attribution Scientist, Dr Nikos Christidis, said: “Attribution studies examine the influence of climate change on current events and how they could be more likely in the future, depending on future greenhouse gas emissions. Our latest study has looked at how the chances of the hottest June on record in western Europe have changed over the past 20 years. We found that in just two decades, the probability of seeing those record breaking 2003 temperatures again have become more than 10 times more likely.

“We also applied our extreme event attribution approach to project how the probabilities might change in the future if we don’t reduce greenhouse gas emissions. This showed that the 2003 record breaking June could be witnessed every two to three years by the end of the century.” 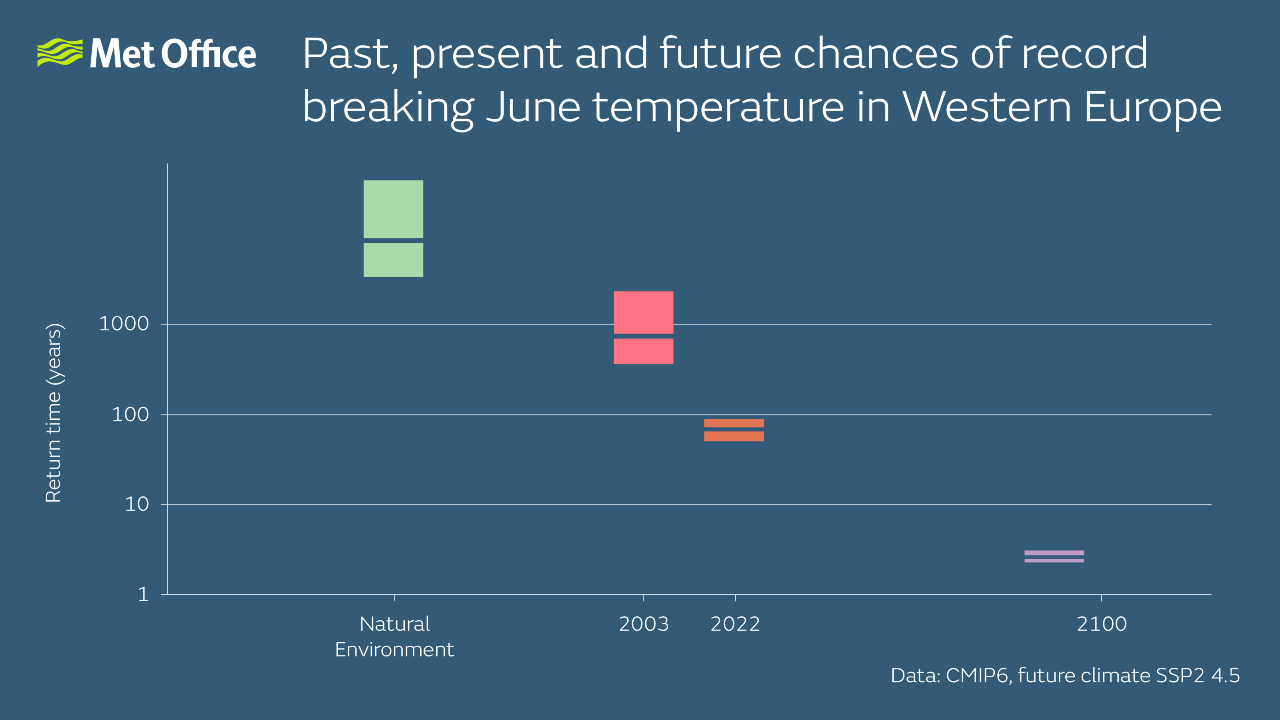 Notable heatwaves like those recorded in 2003, and indeed June 2022, can have significant impacts on human health, infrastructure and food production. Especially with overnight temperatures remaining high, the body has no opportunity to recover from the daytime heat, exacerbating existing health conditions and causing heat related illness in the usually fit and healthy.

Consistent with past studies

Professor Peter Stott, Deputy Head of climate science at the Met Office, added: “At the time of the 2003 record breaking June in western Europe I led an attribution study which calculated that human induced climate change would make events like this 100 times more likely over the next 40 years and would become a regular occurrence. At the time it was a surprising and shocking conclusion. But 20 years on this new study has confirmed what we were saying back then; the impacts of climate change on our weather are already being seen across the world and those impacts are increasing very rapidly.”

This latest study contributes to a growing library of studies examining the influence of climate change on various weather events around the world. You can read more about how attribution studies are conducted and other real-world examples on our attribution web pages.