Driest July in England since 1935

July 2022 was the driest July for England since 1935, and the driest July on record for East Anglia, southeast and southern England, according to provisional statistics from the Met Office.

High pressure dominated the UK for much of July, pushing any Atlantic influence, and therefore much of the rain, into the northwest and allowing temperatures to build elsewhere. Overall, the UK saw just 56% (46.3mm) of its average rainfall for July, making it the driest July in over 20 years (with 1999 recording 46.1 mm) and continues a run of all months, bar February, being drier than average in 2022 so far. 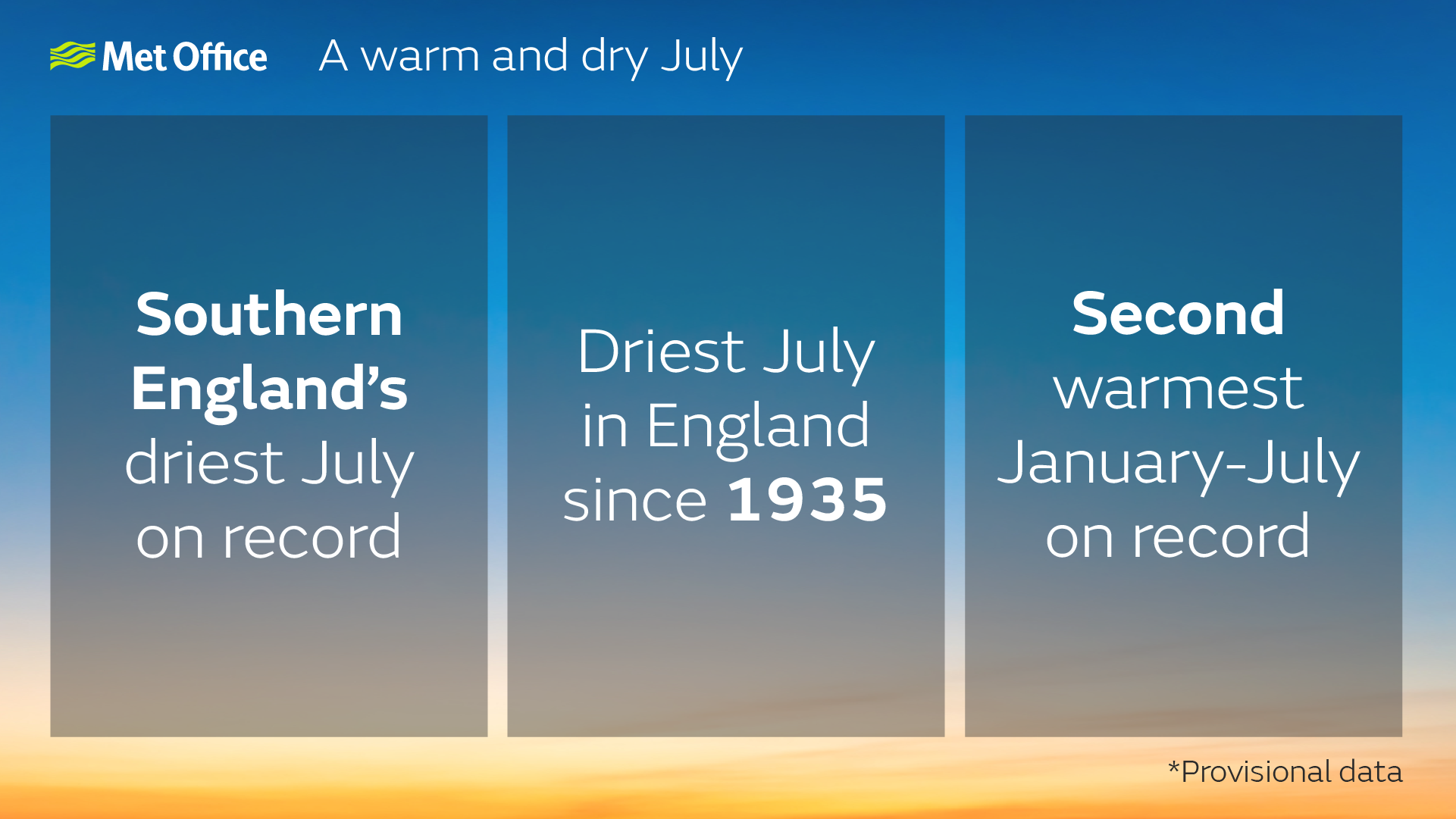 Driest in the south and east

Rainfall has not been distributed evenly in July, as is often the case in the UK, though the contrast has been more stark than usual.

Northern Scotland received 98% (99.4mm) of its July rainfall, with this being the only place you could find rainfall totals modestly above their long-term averages for a few regions. 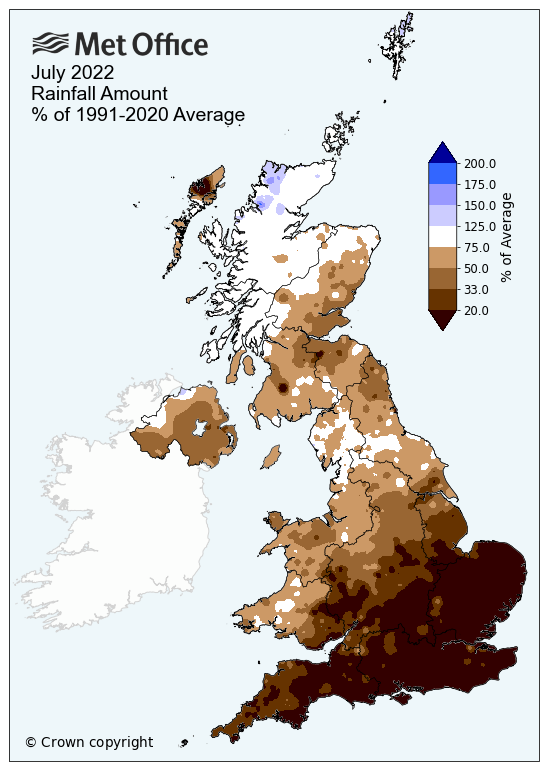 Dr Mark McCarthy of the National Climate Information Centre said: “July 2022 has been a significantly dry month for Southern England, only 10.5mm of rain has been provisionally recorded on average, less than the previous record of 10.9mm set in 1911. The dominant weather pattern for the month has only allowed interludes of rain into northern areas of the UK, with areas further south largely getting any rainfall from isolated and fleeting showers in a month that will ultimately be remembered for extreme heat.”

The Environment Agency has said that impacts from dry weather are expected to continue as the National Drought Group met.

While being a dry month, July 2022 went down in UK climate history as the first time the UK exceeded temperatures of 40°C on 19 July, during an intense heatwave where the UK saw its new record high temperature of 40.3°C at Coningsby, Lincolnshire. Wales also recorded its highest temperature with 37.1°C at Hawarden, and Scotland followed suit with a record high figure of 34.8°C at Charterhall.

Warm days were coupled with warm nights, with northern England provisionally setting a new average daily minimum temperature record for the month, with 12.5°C, which is 1.3°C above its average.

As a result, mean temperatures for the UK were well above average, standing at 16.6°C, which is 1.3°C above average and the joint-fifth warmest July in a series which dates back to 1884. 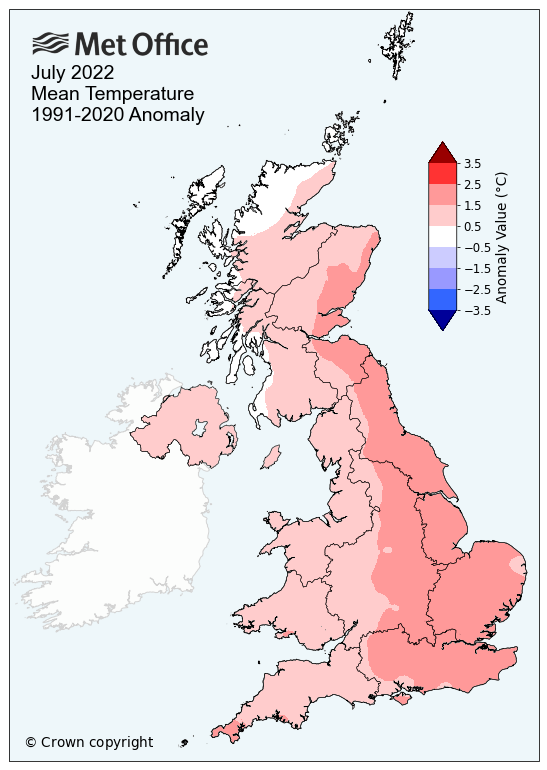 With seven months of the year’s statistics now having being reported, mean temperatures have been higher than average for every month so far this year, with the average mean temperature at 9.7°C making the first seven months of this year the second warmest on record after 2014. However, the first half of the year does not dictate the second half of the year and so it is too early to say how these statistics will compare by December.

Mark McCarthy, Head of the National Climate Information Centre said: “The extreme heat in the middle of July was headline-grabbing, but the heat was fairly widely above average for much of the month, with the southeast especially warm.

“Persistent high pressure, coupled with warm air being drawn in from the continent at times, has led to settled conditions for much of the UK and temperatures well in excess of averages at times.”

The UK saw 179.4 hours on sunshine on average throughout July, which is just over the national monthly average. As well as being the warmest and the driest, southern counties were the sunniest too with some regions recording in excess of 280 hours, and for East Sussex the 8th sunniest July on record. For Northern Ireland, it was the eighth dullest July on record, with 95.7 hours of sunshine, which is 30% fewer hours than average. 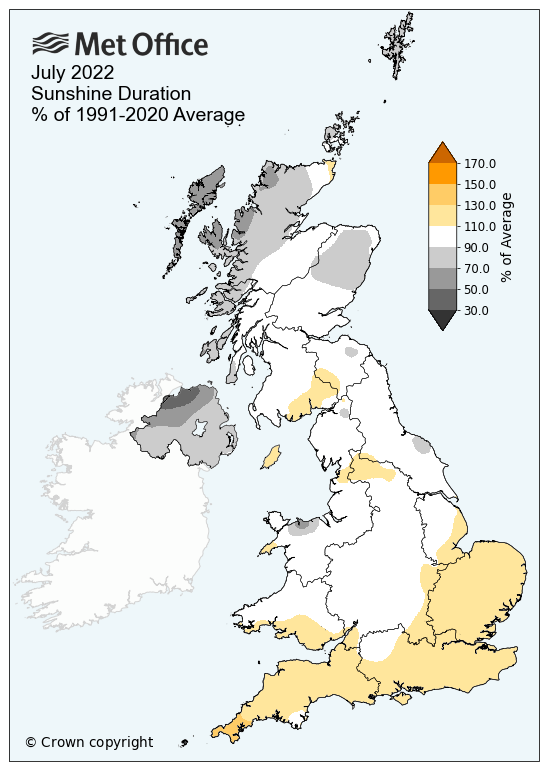 This week showers will bring some rainfall to northern and western areas of the UK, however very few are expected to reach the south and east. By the weekend it is expected to be predominantly dry across the UK as high pressure re-exerts its influence from the south.