The rate carbon-dioxide is being added to the atmosphere needs to slow by around 20% over the next five-year period if global warming is to be limited to 1.5°C, says the Met Office in its annual CO2 forecast.

The Met Office global carbon-dioxide forecast for 2022 has been published today [Tuesday 11 January, 2022].

Professor Richard Betts MBE – who leads the team behind the CO2 forecast –  said: “Our 2022 forecast suggests that nature will temporarily be doing our ‘heavy lifting’ this year as ecosystems – such as tropical forests - are expected to draw down a higher proportion of carbon-dioxide from the atmosphere than usual.

“However, if the world is to meet ambitious targets within the Paris Agreement, the long-term build-up of CO2 in the atmosphere needs to slow rapidly and come to a halt before mid-century. This would need an immediate slowing in the rate that human-induced carbon-dioxide emissions are added to the atmosphere, leading rapidly to a complete stop. A temporary boost from nature is obviously welcome, but we won’t get this free dividend in most years.”

In 1958 – when the first measurements were taken at Hawaii’s Mauna Loa observatory – the rate of annual rise of carbon-dioxide in the atmosphere was less than one part per million (ppm). The atmospheric concentration of CO2 was then about 316 ppm. The rate of rise has accelerated over 60 years and the rise over the last ten years has been nearly 2.5 ppm per year, with the atmospheric concentration reaching 416 ppm on average last year.

The Met Office forecast suggests that relative to 2021, the rise in the atmospheric concentration of CO2 in 2022 will be 2.14 ± 0.52 ppm. In the scenario used by the IPCC to study global warming limited to 1.5°C long-term, the projected rise slows to an average of 2 ppm per year over the next five years, almost 20% lower than the recent average annual rise. In that scenario, the rise then continues to slow rapidly, and then comes to a halt in the early 2040s. Carbon-dioxide levels then decline over the rest of the century in that scenario. The human emissions driving this fall rapidly, reaching net zero mid-century and becoming negative after that. 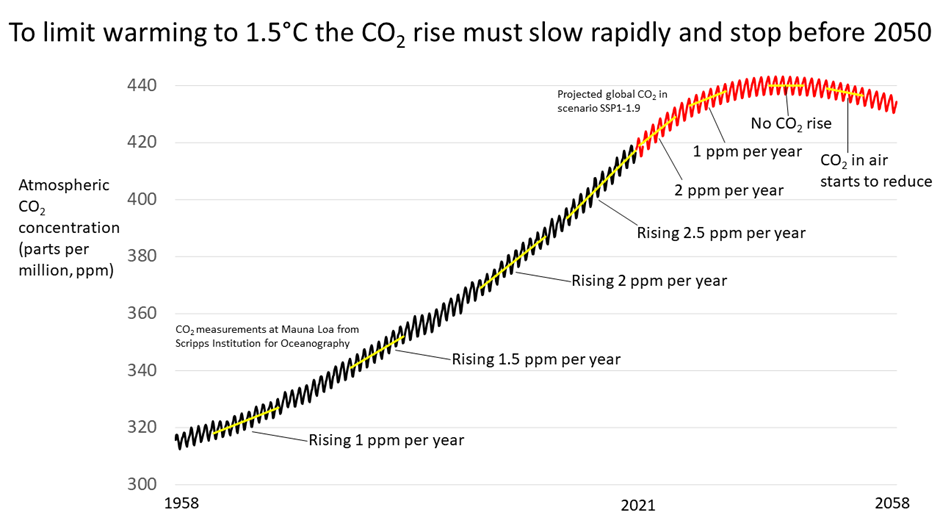 Although the long-term rise in CO2 concentrations comes from human-induced activities, nature also has an influence in the rate of rise because of variations in the strength of so-called natural carbon sinks – features like vegetation and the oceans. These variations are driven by climate variability and show a strong correlation with the El Niño – La Niña cycles in the tropical Pacific.

Richard Betts added: “The last two years have seen successive La Niña events where we see a natural and temporary cooling of the tropical Pacific. During a La Niña event we see relative cooler global temperature and a strengthening of carbon sinks which can draw down more CO2. However, in an El Niño year, such as 2016, we see hotter and drier conditions leading to reduced carbon uptake. Nevertheless, the long-term change is driven by human emissions.”

CO2 measurements at Mauna Loa are taken by the Scripps Institution of Oceanography at UC San Diego, and also independently by NOAA. The future scenario limiting warming to 1.5°C long-term is the SSP1.1-9 scenario.