The dates of the world-famous cherry blossom in Kyoto have been shifted forward by climate change and urban development.

New attribution research has shown how a combination of human-induced climate change and urban warming has brought forward the annual cherry blossom flowering date in Kyoto. The study, published in Environmental Research Letters, found that the full flowering date has been shifted to be over a week (11 days) earlier than if no human-induced climate change or urban warming had happened. 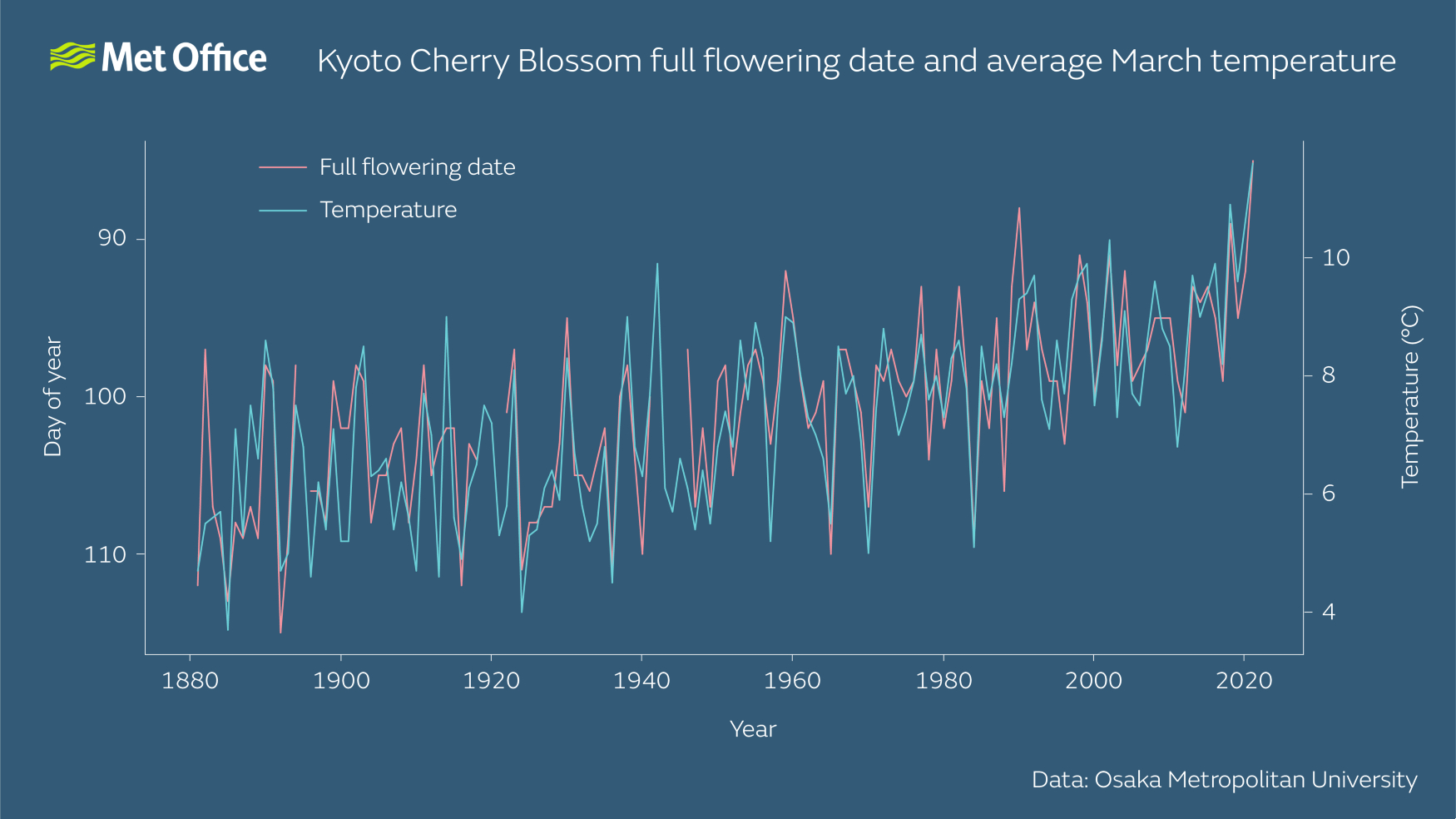 Observations show the average March temperature in Kyoto city centre has increased by several degrees since the pre-industrial period, under the influence of both climate change and urban warming.

To identify the level at which human influence has impacted full-flowering dates, a natural climate (where computer models remove human-induced greenhouse gas emissions) was compared to the current climate. This revealed that an increase in average March temperature in Kyoto led to full-flowering dates moving 11 days earlier due to factors like greenhouse gas emissions and urban warming.

Using climate and phenology models, the scientists from the Met Office and Osaka Metropolitan University also found that if greenhouse gas emissions continue as they are (SSP2 4.5), by the end of the century the early shift is estimated to further increase by almost a week.

Lead Author and Met Office climate scientist, Dr Nikos Christidis, said: “Our research shows that not only have human-induced climate change and urban warming already impacted the flowering dates of cherry blossom in Kyoto, but that extremely early flowering dates, as in 2021, are now estimated to be 15 times more likely, and are expected to occur at least once a century. Such events are projected to occur every few years by 2100 when they would no longer be considered extreme.”

To assess the influence of urban warming, which occurs when a city like Kyoto grows and becomes more developed, temperature observations from a Kyoto city centre weather station were compared with another in the rural location of Kameoka.

Temperatures in the two locations began to diverge after the 1940s with central Kyoto warming faster compared to the rural location. The full flowering dates of cherry blossom in Kyoto are now 11 days earlier in Kyoto’s warmer climate with the research finding almost half of this change was caused by urban warming.

The study found that the difference between the two stations has levelled off around the end of the 20th century, showing that the urban warming of central Kyoto has now reached its peak. Both sites continue to see increasingly earlier full-flowering dates once the temperature difference levelled off, indicating the ongoing influence of climate change. 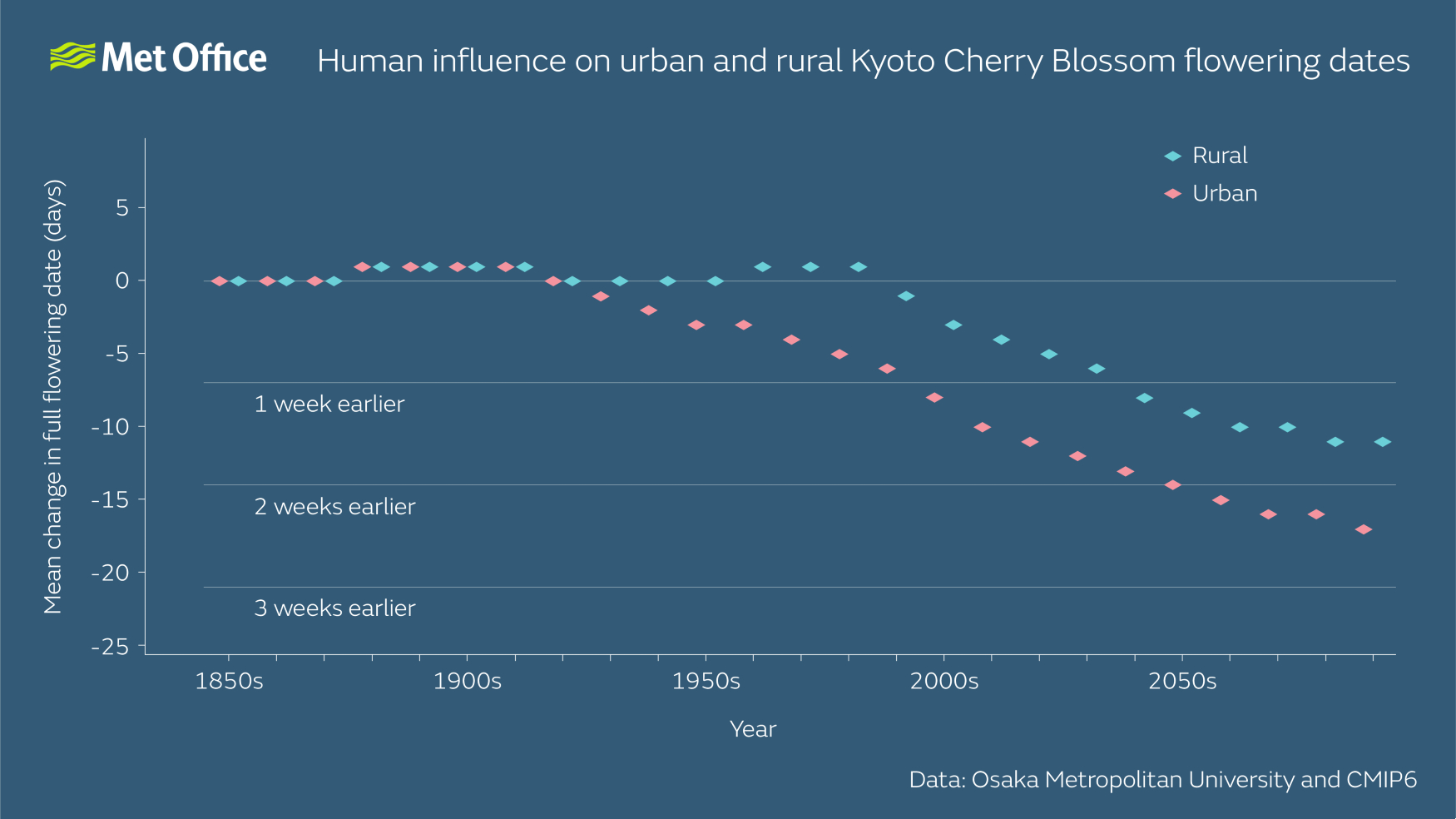 Contributing author Yasuyuki Aono from Osaka Metropolitan University, said: “Spring cherry blossom flowering is a culturally significant event in Japan. In Kyoto, the full bloom date of cherry blossoms has been investigated since about 1,200 years ago, and the bloom date in 2021 is the earliest known on record.

“After accounting for the current urban warming bias in Kyoto and estimating the date of full bloom affected by climate warming, we found that human influence has moved the full-flowering date forward by around 11 days. This research demonstrates a new application of the long-running floral-phenological data series in Kyoto.”

The cherry blossom is an important event for Japan and is celebrated as the most iconic herald of spring. Given its fleeting appearance, understanding its timing is critical in countries like Japan, where spring festivals are an important contributor to the local economy.

Earlier flowering times pose a challenge to predictability and the ability to plan for events. Aside from tourism and festivals, the sensitivity of tree phenology to rising temperatures also has knock-on effects on crop-tree farming and land management practices in the country.

Kyoto, one of several cities across Japan that draws significant attention for the stunning cherry blossom, is also a city with notable prominence in climate change science. The Kyoto Protocol was adopted in December 1997 and aimed to reduce the onset of global warming by reducing greenhouse gas concentrations in the atmosphere. It was the first agreement between nations to mandate reductions in greenhouse gas emissions.