Reflecting on an historic spell for weather and climate

An historic day for weather and climate in the UK. That’s the view from Met Office scientists and forecasters as they review this week's extreme record-breaking temperatures.

The record-breaking conditions the UK experienced were carried from south west Europe where an intense period of hot weather is raging. For the moment our weather will now be dominated by the influence of the Atlantic.

Dan Suri is a Met Office chief forecaster. He said: “Now that the extreme heat is behind us, the UK can look forward to more typical conditions. The introduction of moister air from the Atlantic is triggering the risk of thunderstorms and heavy showers for parts of the UK with a warning in force tomorrow for parts of south and southwest England, as well as much of southern Wales.

“By the weekend it’ll turn drier, brighter and increasingly warm in the south and east of England. Northern and western parts of the UK are set to experience relatively fresher conditions as it turns breezier and wetter here over the weekend.”

A review of the records 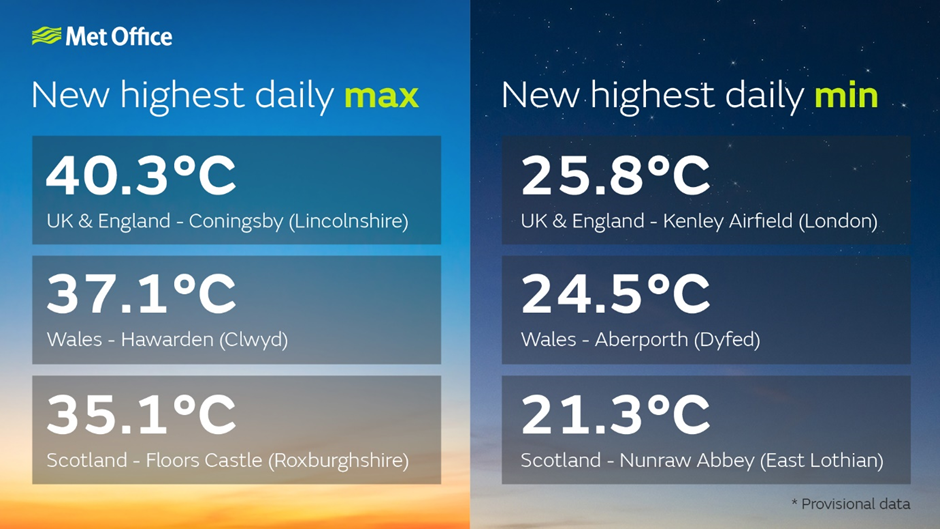 Dr Mark McCarthy is the head of the Met Office National Climate Information Centre. He said: “This week has been a remarkable week for the UK’s climate.

“We have seen temperature records tumbling. A new UK national climate temperature record should be a rare occurrence, and we would normally expect a new record to only exceed the previous one by a fraction of a degree.

“However, yesterday we saw 39 stations across a large swathe of England exceed the previous highest daily temperature extreme, with the highest exceeding the previous record – set in Cambridge in July 2019 - by a remarkable 1.6°C.

“A factor of the recent extreme hot spell were the overnight temperatures which also broke previous records by a large margin with Kenley Airfield, Greater London recording a minimum of 25.8°C beating the previous record by 1.9°C

Did climate change play a role in the record-breaking heat?

“The extreme temperatures that we have been experiencing in the UK are unprecedented in recorded history,” that is the view of Met Office Chief Scientist Professor Stephen Belcher. He added: “In a climate unaffected by human influence, climate modelling shows that it is virtually impossible for temperatures in the UK to reach 40°C.

“Climate change, driven predominantly by accumulation of greenhouse gases in the atmosphere, has warmed the average climate by more than 1°C. So, when we see atmospheric circulation patterns conspiring with the background warming, we experience even hotter conditions.” Link to blog

Stephen Belcher added: “Under a very high emissions scenario we could see temperatures exceeding 40 degrees as frequently as every three years by the end of the century in the UK. Reducing carbon emissions will help to reduce the frequency, but we will still continue to see some occurrences of temperatures exceeding 40°C and the UK will need to adapt to these extreme events.”