For the first time temperatures of 40°C have been forecast in the UK and the Met Office has issued the first ever Red warning for exceptional heat.

Exceptional heat is expected to affect a large part of England on Monday and Tuesday, with temperatures likely in the high 30s C in some places and perhaps even exceeding 40°C.

Parts of England on Monday and Tuesday

The Red Extreme heat national severe weather warning covers Monday and Tuesday (18 and 19 July) for parts of central, northern, eastern and southeastern England. An Amber Extreme heat warning, is also in place for much of England and Wales and southern Scotland until the end of Tuesday.

Met Office Chief Meteorologist Neil Armstrong, said: “The extreme temperatures that we have been forecasting are now beginning to build and it is likely that today we will see values reach into the high 30s, possibly challenging the UK record of 38.7°C set in July 2019.

“Even higher maximum temperatures will develop tomorrow with a 70% chance of somewhere in England exceeding 40°C. A value of this level would exceed the current UK record by 1.3°C or more. This is akin to a marathon runner shaving 20 minutes off of the current record.

“Nights are also likely to be exceptionally warm, especially in urban areas. This is likely to lead to widespread impacts on people and infrastructure. Therefore, it is important people plan for the heat and consider changing their routines. This level of heat can have adverse health effects.”

The step up in warning level to red last week complemented the increase in the current Heat Health Warning to Level 4 for England by the UK Health Security Agency.

In addition to the potential for UK temperature records to be broken, records in Scotland and Northern Ireland could also easily be broken.

The weather station at Hawarden (Clwyd) has recorded a maximum temperature so far of 37.1°C today at 15:19hrs local time. This is provisionally a new record daily max temperature record for Wales beating the previous record set at Hawarden Bridge of 35.2C set on 2 August 1990.

Will we get record-breaking heat?

This is the first time we have forecast 40°C  in the UK. The current record high temperature in the UK is 38.7°C, which was reached at Cambridge Botanic Garden on 25 July in 2019.

Weather forecast models are run numerous times to help us quantify the likelihood of a particular event occurring and estimate the uncertainty which is always present in weather forecasting to some degree. Some models are now producing a 70% chance of maximum temperatures in excess of 40°C in isolated parts of the UK for the start of next week. Mid, to high, 30s Celsius will be seen more widely with a 95% chance we will exceed the current record. 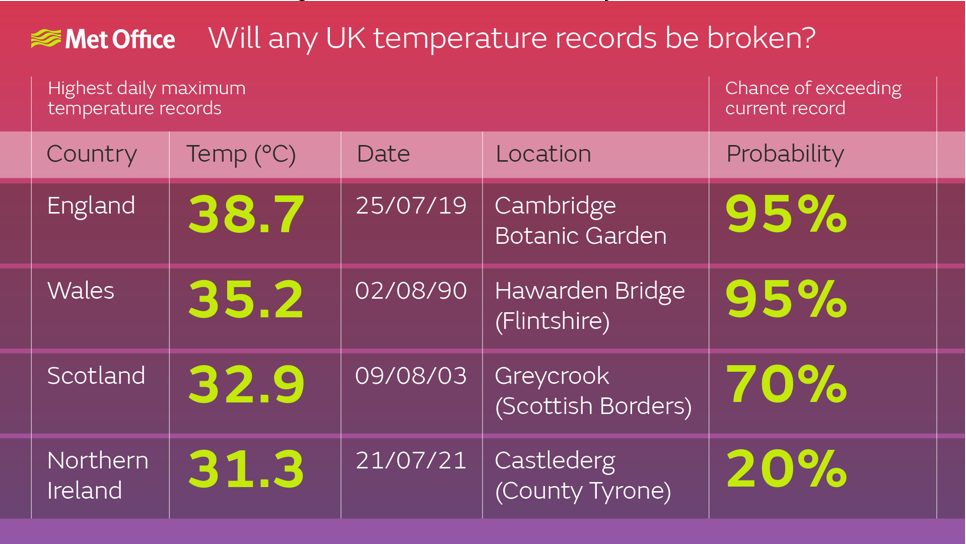 What happens after Tuesday

Temperatures are expected to start to return closer to normal for the time of year from the middle of next week onwards as cooler air pushes across the country from the west.

“We hoped we wouldn’t get to this situation but for the first time ever we are forecasting greater than 40°C in the UK. “Climate attribution scientist at the Met Office, Dr Nikos Christidis, said “In a recent study we found that the likelihood of extremely hot days in the UK has been increasing and will continue to do so during the course of the century, with the most extreme temperatures expected to be observed in the southeast of England.

“Climate change has already influenced the likelihood of temperature extremes in the UK. The chances of seeing 40°C days in the UK could be as much as 10 times more likely in the current climate than under a natural climate unaffected by human influence. The likelihood of exceeding 40°C anywhere in the UK in a given year has also been rapidly increasing, and, even with current pledges on emissions reductions, such extremes could be taking place every 15 years in the climate of 2100.”

A recent Met Office study found that summers which see days above 40°C somewhere in the UK have a return time of 100-300 years at present, even with current pledges on emissions reductions this can decrease to 15 years by 2100.

The chances of seeing 40°C days in the UK could be as much as 10 times more likely in the current climate than under a natural climate unaffected by human influence. The likelihood of exceeding 40°C anywhere in the UK in a given year has also been rapidly increasing

Whilst a 1°C background temperature increase may not seem significant, the resulting increase in the severity of extreme heat events is already evident in the observed record. This has widespread and significant impacts.

A Level 4 UK Health Security Agency Heat Health Alert has been issued for Monday and Tuesday. This is level of alert is used when a heatwave is so severe and/or prolonged that its effects extend outside the health and social care system. At this level, illness may occur among the fit and healthy, and not just in high-risk groups.

Dr Agostinho Sousa, Head of Extreme Events and Health Protection at UKHSA, said: “Heat-health alerts have now been issued to the majority of the country, with temperatures set to remain consistently high throughout the duration of the weekend and the start of next week.

“It is important to keep yourself hydrated and to find shade where possible when UV rays are strongest, between 11am and 3pm.

“If you have vulnerable family, friends and neighbours, make sure they are aware of how they can keep themselves protected from the warm weather.’’

Peter Jenkins, Director of Campaigns, Water UK said: “Water companies are seeing substantial demand during this extremely hot weather. We can all help ensure there’s enough to go around by being mindful of the amount of water we use while ensuring we stay hydrated and safe.

“By making just small changes indoors or in the garden you can have a big impact on our water consumption. Our Water’s Worth Saving campaign has a host of helpful top-tips showing the simple things we can all do to save this precious resource, so it remains readily available now and in the future.”

Mel Clarke, Customer Service Director for Operations at National Highways, said: “It is always important to plan ahead for your journey and this advice is no different during periods of hot weather. Our advice is that everyone should check their vehicles, such as tyres, coolant and oil levels, before heading out.”

Find out more about driving in hot weather with National Highways.

Government advice is that 999 services should be used in emergencies only; seek advice from 111 if you need non-emergency health advice.

Top ways to stay safe when the heat arrives are to: