Globally 2022 was the sixth warmest year in a series stretching back to 1850, according to figures released today by the Met Office.

The global average temperature for 2022 was 1.16 °C above the pre-industrial baseline; 0.04 °C warmer than the value for 2021. This places 2022 nominally the sixth warmest year in the HadCRUT5 global temperature dataset which runs from 1850.

Dr Colin Morice is a Climate Monitoring and Research Scientist with the Met Office. He said: “2022 was another near-record year for global average temperatures, despite the slight cooling influence of La Niña: a pattern of climate variability in the tropical Pacific that typically acts to suppress global temperatures.

“Climate variability has always imparted an influence on global temperature, making some years slightly warmer or cooler than others. The influence of natural variability throughout the 173-year-long observed temperature record is small compared to the ongoing warming due to human-induced climate change.”

Even those years with a temporary cooling influence from La Niña, such as 2022, are now much warmer than all years before 2015, even those that had been boosted by a warm influence from El Niño.

2016 - which experienced a significant El Niño event - is currently the warmest year in the series since 1850. 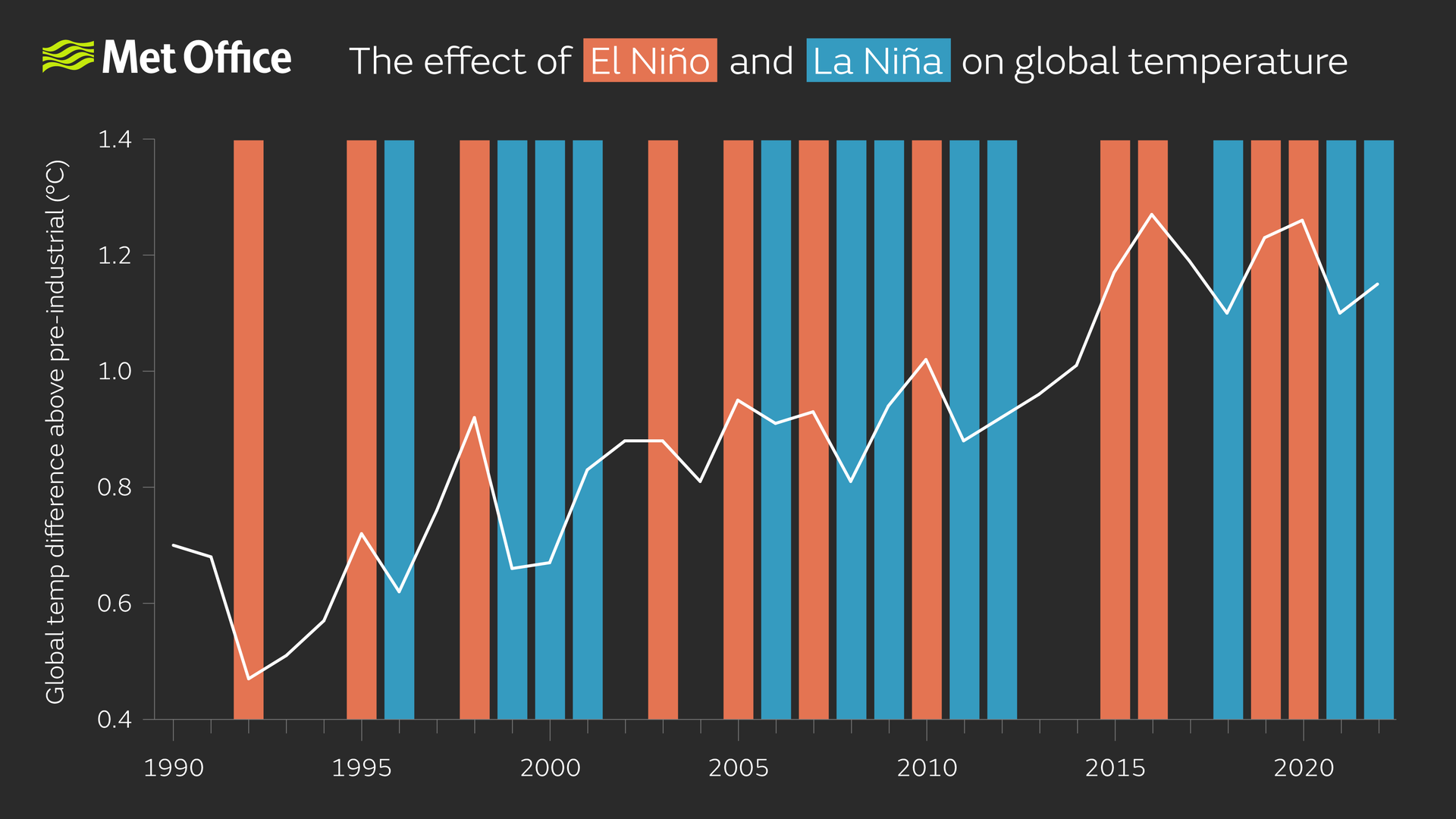 Professor Adam Scaife is a Principal Fellow and Head of Monthly to Decadal Prediction at the Met Office. He said: “Our long-range forecasts now suggest that this run of La Niña winters is likely to end later this year, raising the prospect of even higher global temperatures.”

The Met Office global temperature forecast for 2023 is here.

The HadCRUT5 dataset is compiled by the Met Office and the University of East Anglia, with support from the National Centre for Atmospheric Research. It shows that the year was 0.80 ± 0.04 °C above the 1961-1990 average, placing it sixth warmest in the series. When compared with the pre-industrial global reference period, the year was 1.16 ± 0.08 °C above the 1850-1900 average. This aligns extremely well with figures published today by other international centres.

The World Meteorological Organization uses six international data sets to provide an authoritative assessment of global temperature change. They report 2022 was around 1.15 ± 0.13°C warmer than the 1850-1900 baseline based on an average of the six data sets.

The long-term warming is clear. Since the 1980s, each decade has been warmer than the previous one and this is expected to continue.

Professor Tim Osborn, of the University of East Anglia’s Climatic Research Unit, said: “Our global temperature data show that 2022 was consistent with the long-term warming of 0.2 °C per decade that we have observed over the last 50 years. Unless we can take action that slows this rate of warming, the world’s climate will reach 1.5 °C above pre-industrial levels within the next 15 years.”

Global warming and other long-term climate change trends are expected to continue as a result of record levels of heat-trapping greenhouse gases in the atmosphere. Prof Tim Osborn added:

You can see the impact on other key climate indicators on the Met Office global climate dashboard.