Lessons and legacy of the Great Storm of 1987

Looking back at the Great Storm of 1987, which hit the south of England in October.

Forecasters at the time had been predicting severe weather up to four days ahead, but, as time went by, weather prediction models of the time gave an unclear picture. Models suggested severe weather would pass to the south of England only skimming the south coast.

Most of our autumnal storms head in from the Atlantic to the west of the UK. However, this storm developed over the Bay of Biscay to the south.

Particularly warm tropical air and very cold polar air collided, forcing warm air to rise creating an area of low pressure. A big difference in temperature between the warm and cold air helped to cause a rapid ascent and therefore a particularly low pressure. To the west of the low, pressure rose rapidly leaving a big differential in pressure, which can be seen in the tightly drawn isobars of the chart below. 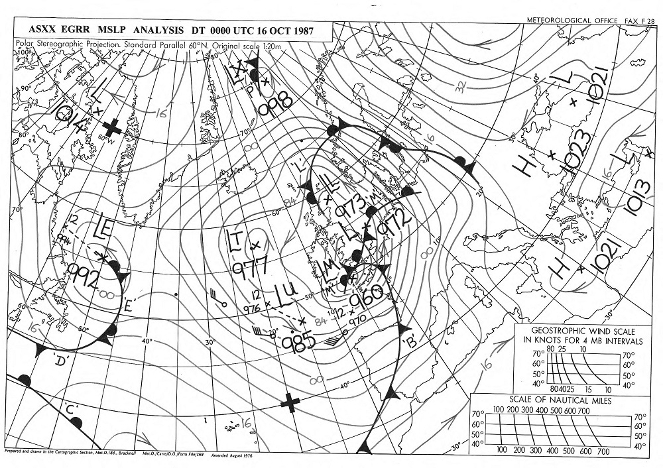 The forecast – a hurricane or not?

Many of us remember the words of Michael Fish at lunchtime before the storm struck:

‘…earlier on today apparently, a woman rang the BBC and said she’d heard there was a hurricane on the way. Well, if you are watching, don’t worry, there isn’t…..’

He was talking about a separate storm over the western part of the North Atlantic Ocean that day. He said it wouldn’t reach the UK, and it didn’t. But the rapidly deepening low from the Bay of Biscay did.

This storm wasn’t officially a hurricane as they need specific conditions found in the tropics, but actually hurricane force winds did occur in some locations in the UK during the Great Storm.

Michael Fish and Alex Deakin reflect on their memories of the Great Storm and look at how forecasting has improved over the last 30 years.

Several factors came together to make this storm particularly ferocious, but it was the track of the storm that was probably most significant.

Arriving over the south coast of the UK, it tracked north and east before reaching the Humber estuary at about 5.30am on 16 October. This path took in a large built up and densely populated area of the UK, exacerbating the damage caused.

In southeast England, where the greatest damage occurred, gusts of 80mph were recorded for three to four consecutive hours. The highest gust recorded over the UK was 115mph at Shoreham on the Sussex coast at 3.10am. Gusts of more than 100mph were recorded at several other coastal locations.

Anemogram from Shoreham showing the 115mph (100 knot) gust before a power cut shown by the gap in the trace.

Even inland, gusts exceeded 90mph with 94mph being recorded at London Weather Centre at 2.50am.

Anemogram from London Weather Centre showing the 94mph (82 knot) gust recorded at 2.50am.

The Met Office and other European forecasters had failed to predict the intensity of the storm. It was clear that the forecasting capabilities at the time couldn’t always predict this type of event.

This was to become a catalyst for a programme of investment and improvement in the science, technology and communication of forecasting, which has transformed the way the UK responds to severe weather.

The Met Office works with leading international research centres to push the boundaries of forecasting to deliver ever-better accuracy, but also to improve the understanding of weather phenomena.

A sting in the tail

The strength of the 1987 storm was boosted by a phenomenon known as the ‘Sting Jet’. This is where cold dry air from high in the atmosphere descends into weather systems, creating an area of particularly strong winds at ground level.

At the time of the storm, no one knew these existed, but now they are well understood and included in forecast models. For example, a storm, which affected Scotland in December 2011, was boosted by a sting jet, explaining the maximum gust of 164mph recorded on the top of Cairngorm.

At the time, we had very few observations from the Bay of Biscay where the storm formed. As a direct result of the Great Storm, deep ocean weather buoys were located around the British Isles to provide hourly weather information and help us to monitor developing weather conditions.

Supercomputing capability has also hugely advanced since 1987. A typical smartphone of today has a least five times more computer power than our supercomputer of 1987 that could perform 4 million calculations per second. Today our latest supercomputer is able to perform 14,000 trillion calculations per second helping us to unlock new science and provide more detailed forecasts and warnings.

In 1987, computing capacity limited the resolution of the global model we used for weather prediction to grid boxes of 150 km. Now the model works at 10 km on a global scale, giving vastly improved resolution. Over the UK, these grid boxes have been reduced to just 1.5 km leading to improved forecast accuracy, enabling us to give better information about the weather that affects us all.

Additionally, unlike 1987, we now run multiple forecasts (called ensembles) that help us to understand the probabilities involved in a forecast and give a better estimate of the risk of high impact weather events.

All of these improvements mean that our four-day forecast is now as accurate as our one-day forecast was 30 years ago.

Why we’re better prepared for the next Great Storm

In the wake of the Great Storm of 1987, the Met Office set up the National Severe Weather Warning Service (NSWWS) to provide a coordinated way of delivering warnings to government, emergency responders and the public.

Initially those warnings were faxed and emailed to emergency responders and other organisations such as the media and were carried on TV and radio broadcasts. In 1987, most people received weather information at fixed times from radio and TV. Today, over 90% of adults consult weather forecasts through a range of channels including the web, social media and mobile apps, as well as traditional media.

Forecasts can now be accessed whenever and however you want, with people able to sign up to receive warnings direct through our mobile app, emails or twitter alerts.

We have continued to improve our forecasts and warnings over the 30 years since the 1987 storm. In October 2013, we saw an example of all of these improvements in practice. On Monday 28 October 2013, a severe storm, which the media named the St Jude's Day storm, travelled across southern England.

We began communicating the potential for severe weather more than a week ahead, giving increasing detail as it became available. In the run up to the storm, Met Office advisors took part in 90 teleconferences with local resilience groups around the UK to keep them up to date with the latest information so they could plan for likely impacts.

We issued warnings for the risk of potentially damaging winds across southern parts of England five days ahead of the storm; the earliest possible warning on our five-day National Severe Weather Warning Service.

We also communicated our warnings through our social media, our apps and our website including:

Our trusted, authoritative warnings enabled many people, including contingency planners, emergency responders and the public, prepare for and take action to avoid the impacts of the storm.

How communicating the weather has transformed since the Great Storm of 1987, with Michael Fish and Alex Deakin

Naming storms such as the St Jude’s Day storm highlighted the benefits of establishing a formal system for the naming of mid-latitude storms. In 2015, working in collaboration with the Irish meteorological service, Met Éireann, we launched a pilot project to name storms when the wind is forecast to be strong enough to meet certain criteria.

In the UK, a storm is named when it has the potential to cause a sufficient level of impact that will result in an amber or red warning. We are now into the third year of this project and surveys conducted after named storms in 2016/17 have shown increases in awareness and action taken in response to people hearing of a named storm. Storm Doris for example, achieved an 89% awareness score with 94% of those responders finding the severe weather warning useful. 82% of people that took action ahead of Storm Doris felt they were right to do so.

Our weather warnings are an essential service for protecting life and property in the UK. One our key priorities is to continuously evolve and improve the quality and delivery of our forecasts and warnings. After extensive user research, we are currently in the process of making a range of improvements, including the communication of warnings, the user experience and access to warnings and enhancing public safety by warning of additional weather impacts. Improvements that you will see over the coming months will include: