Two state-of-the-art models for studying the Earth-system and climate are the result of years of work and feature a host of advances over previous models.

Climate models are essential tools for understanding the past, present and future of the Earth’s climate. They use equations to represent the processes and interactions in our atmosphere, land, oceans and ice – providing a simulation of the entire planet.

The Earth System Model UKESM1, and the physical model (or General Circulation Model) it is based on, HadGEM3-GC3.1 are the result of years of work by scientists and software engineers from the Met Office and wider UK science community.

The new models have more regional detail with higher atmosphere and ocean resolution than our previous global climate models, used in the Intergovernmental Panel on Climate Change Fifth Assessment Report, as well as most of the new generation of models, which have been developed by other leading research centres around the world.

The new models include a host of advances (as detailed in a peer reviewed paper) which deliver a marked improvement compared to previous models. For example, while the Met Office’s highly regarded previous generation model HadGEM2-ES is considered a world leader in its representation of clouds, the new models include a range of further improvements. This results in their simulations of cloud coverage and cloud properties now match real-world observations even more closely. A more detailed representation of sea-ice means polar seasonal cycles are captured more accurately. Other key areas of improvement include a more accurate representation of heat exchange between ocean and atmosphere, the heating/cooling properties of atmospheric carbon dioxide and other major greenhouse gases, and the temperature structure of the ocean and atmosphere. 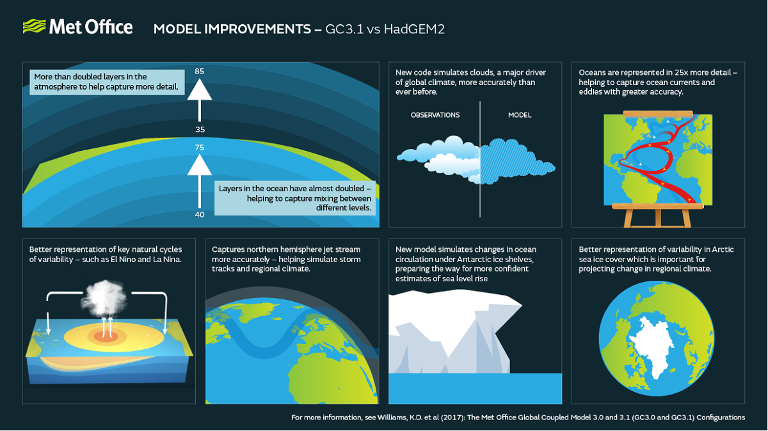 Analysis shows the climate sensitivity of the models is high. For both models the Transient Climate Sensitivity (TCR) is about 2.7 °C, while the Equilibrium Climate Sensitivity (ECS)  is about 5.4°C for UKESM1 and about 5.5°C for GC3.1. Future projections using the new models are in progress. When these have been analysed, we will have a better understanding of how the climate sensitivity affects future warming and associated impacts.

The 6th Coupled Model Inter-Comparison Project is led by the World Climate Research Programme and aims to create a better understanding of climate change. A range different research centres run the same set of experiments on their models.  Results are compared and used to assess the performance of these models to quantify the spread among future projections.

UKESM1 and HadGEM3-GC3.1 will be used in CMIP6 and so will form the basis of UK contributions to IPCC AR6, where they will be used alongside a host of other models from research centres around the world.

Papers are now being written to compare the performance of the CMIP6 models. For example, this comparison paper gives details on cloud feedbacks across the models.