James Glaisher has now become the star of Hollywood Movie ‘The Aeronauts’. The real story behind the man is equally as fascinating.

James Glaisher was born in Rotherhithe on 7 April 1809. His first post was as an Assistant for the Ordnance Survey of Ireland, working on Bencorr Mountain in Galway and at the summit of Keeper Mountain in Tipperary. Sadly the exposed nature of the work damaged his health and he was forced to return to England but prolonged periods spent enveloped in the clouds had a profound effect on Glaisher and established his interest in meteorology.

In 1836 Glaisher become the first Superintendent of the Magnetical and Meteorological Department at the Royal Observatory Greenwich. Glaisher was not one for following the rules. His employer described him as ‘uncouth’. Aged 34 he married the 15yr old daughter of one of the observatory staff, and his disregard for regulations got him into trouble on many occasions. Nevertheless it was his adventurous and unconventional character, that built his pioneering spirit.

Glaisher had a lifelong interest in meteorology and was the first to prove the worth of many important techniques. He established the first UK climatological observing network and to ensure consistency he visited and inspected all the sites, calibrated instruments, set observing hours and even invented the Glaisher Screen to improve the exposure of thermometers. Glaisher’s network marked the beginning of a widespread system of simultaneous observations. The availability of accurate observation data is still a critical underpinning part of modern meteorology. He published the work of his network in his 'Meteorology of England' between 1847 and 1892, this is available to view or download on our Digital Library and Archive. 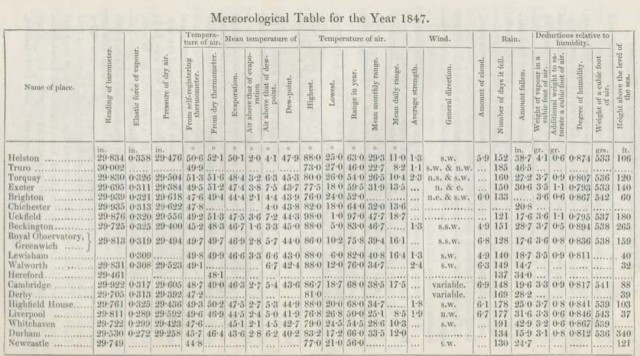 Using his observation network Glaisher was also able to produce a series of daily weather maps. The first of these to be published was at the Great Exhibition on 8 August 1851. The map was based on observations received at the Crystal Palace via the new Telegraph Network and helped to demonstrate this new technology. It also proved that the telegraph network could be used to quickly gather and distribute meteorological information, an underpinning requirement in the establishment of the Gale Warning service in 1861. 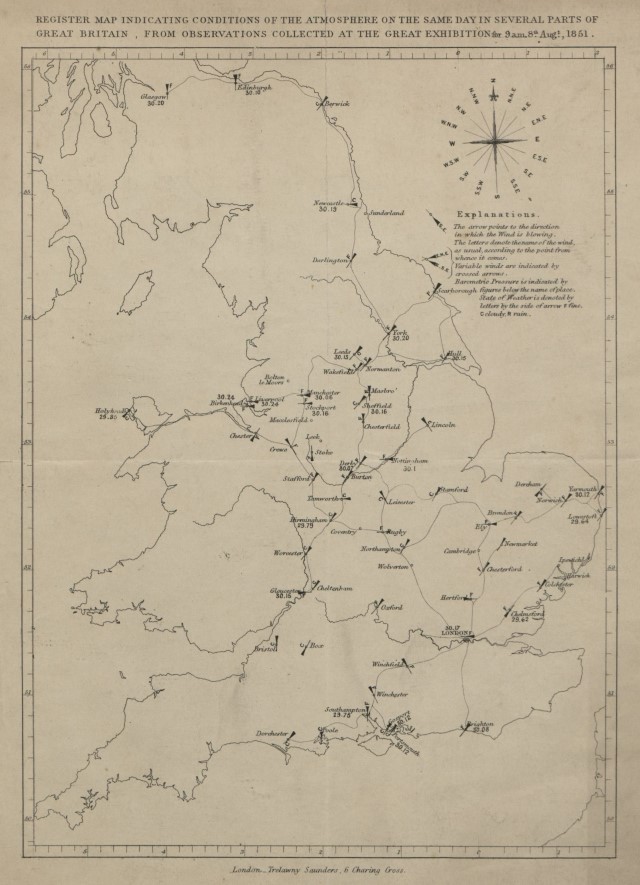 The 19th Century saw may great advances. Among these was the development of ballooning. Whilst for most, ballooning was an expensive and adventurous hobby, the British Association established a Ballooning Committee to plan the use of balloons to learn more about the atmosphere. Their primary aim was to determine the temperature of the air and humidity at different elevations as high as possible. Twelve other objectives covered experiments on dew point, pressure, oxygen, magnetism, clouds, air currents, sound and atmospheric phenomena. Glaisher is thought to have watched a number of ascents from the observatory at Greenwhich and was delighted to accept when they approached him to carry out the experiments.

Glaisher’s planning was meticulous, he practiced taking all his measurements in advance so that they could be achieved in the necessary time and space once in the balloon car and designed a special table and basket so that in the event of a rapid descent he could protect the instruments from damage. He took no such pains with himself! 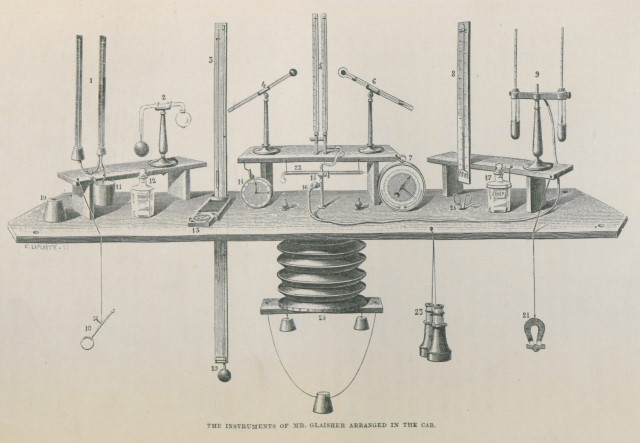 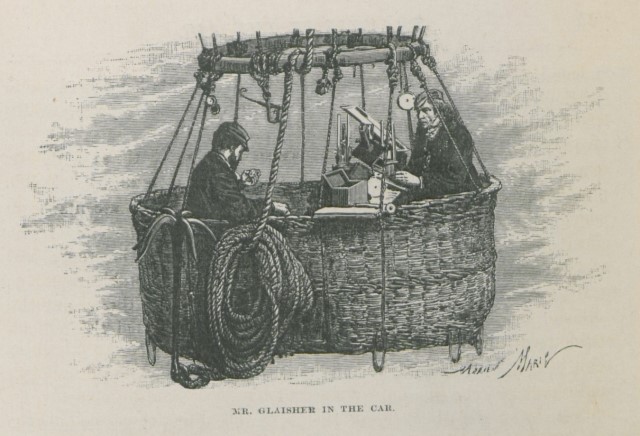 Between 1862 and 1866 Glaisher made a series of 28 balloon ascents with his pilot Henry Tracy Coxwell. These were followed by another 27 in 1869, this time from a captive balloon at Chelsea where the rate of ascent could be much better controlled.

The ascent that gained him international fame was made on 5 September 1862. On the day Glaisher made regular observations up to about 29000ft, but as the balloon continue to ascend he lost consciousness due to oxygen deprivation. Shortly beforehand Coxwell had noticed that the valve-line that regulated gas flow into the balloon had become twisted so climbed out of the balloon car and into the ring to adjust it. As he prepared to return to the car Coxwell discovered that his hands had become frozen from the low temperatures but managed to lower himself back into the car using his arms. He was then able to open the valve to begin the descent by using his teeth. His heroism saved the lives of both men, and Glaisher meanwhile resumed his observations as soon as he regained consciousness giving testament to his scientific background and sheer dedication. 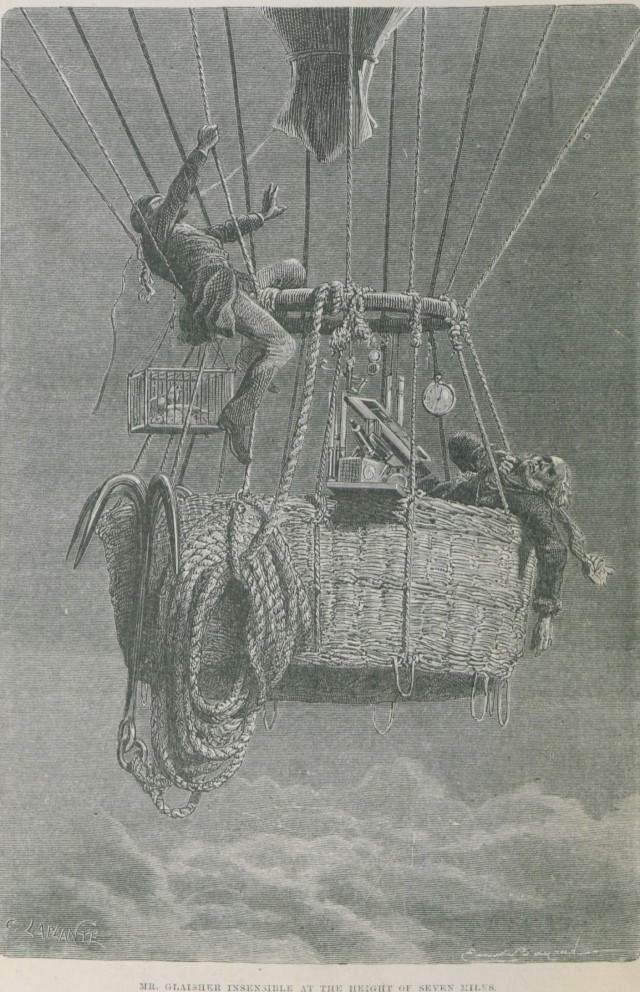 It is estimated that the pair reached  between 36000 and 37000ft, around the cruising altitude of most jet aircraft with air temperatures ranging from -40 C to – 57C. It is quite remarkable that they survived at all. Glaisher’s high altitude temperature measurements showed for the first time that temperature does not decrease uniformly with height and gave the first indication of the existence of the stratosphere by discovering what would later become known as the tropopause. In addition he discovered the first evidence for vertical wind sheers although he had no means of measuring them quantitatively at the time.

Glaisher wrote and lectured extensively on his exploits and both Travels in the Air and Balloon Ascents 1862 are available via our Digital Library and Archive. 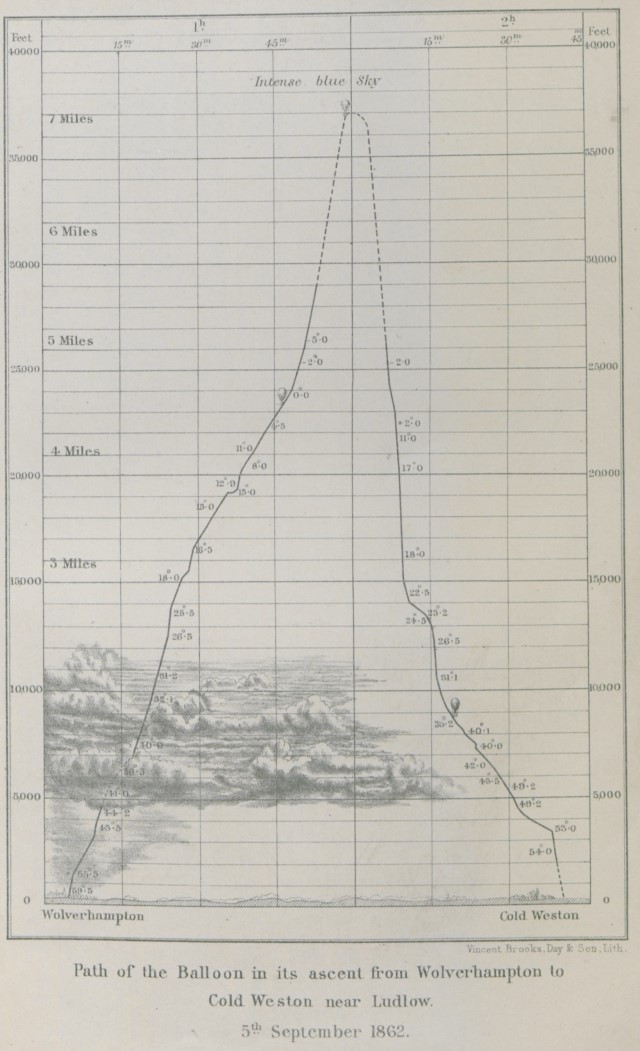