Global annual average surface temperature in 2015 is looking set to reach 1°C above the pre-industrial average (as represented by the 1850-1900 reference period) for the first time, according to the HadCRUT4 dataset produced by the Met Office and the Climatic Research Unit at the University of East Anglia (see figure 1). 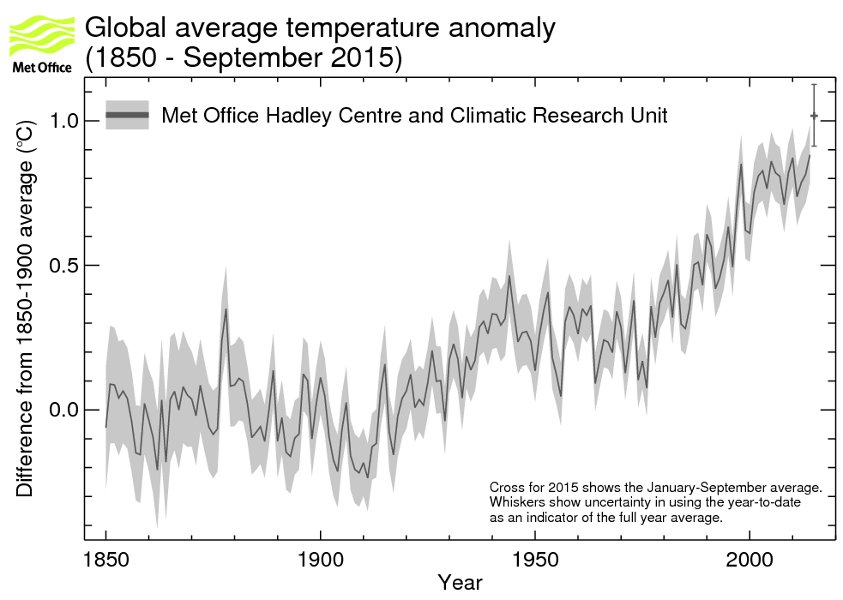 This is based on the current January to September 2015 temperature anomaly, and is also expected to hold when the final full-year anomaly is calculated.

The warmth of 2015 represents an important marker because it means we are reaching halfway to 2°C for the first time. In 2010, parties to the United Nations Framework Convention on Climate Change (UNFCCC) agreed warming should be limited to below 2°C to avoid dangerous climate change.

The Earth's global average surface temperature record gives a long-term perspective from which we can determine that temperatures have risen since pre-industrial times, consistent with a warming of the climate system as a whole and as observed in multiple climate indicators2. On top of this long-term warming trend, year-to-year climate variability, caused by phenomena such as El Niño and the Pacific Decadal Oscillation, can act to either reduce or enhance the rate of increase of global temperatures; in some cases these patterns of variation can lead to fluctuations over years or decades.

Over recent years there has been a slowdown in warming at the Earth's surface. The rate of warming during the period from 1970-1998 was around 0.17°C per decade, while during 1998-2012, the rate slowed to around 0.04°C per decade3. This is due to a number of possible factors, including increased aerosols and an increase of heat taken up by the deep ocean and therefore not manifested as a warming at the surface.

This year, with a pronounced El Niño underway that acts to elevate global average surface temperature, it is looking probable that 2015 will be warmer than any other year in the observational record. Whilst year-to-year climate variability means that future years may not be as warm as 2015 and therefore below 1°C, the long-term warming trend is expected to continue.

One third of sea-level rise

Some aspects of the Earth system take longer than surface temperature to respond to greenhouse gas forcing. For example, global mean sea-level adjusts over a longer period and therefore lags behind changes in temperature. Over the period 1901-2010 global mean sea level rose by around 20cm and has been rising by about 3mm a year since the early 1990s4. If we consider emission pathways that aim to limit warming to 2°C, then we have seen only about one-third of the eventual sea level rise that could be realised by 2100.

It is also virtually certain, according to IPCC AR55, that 2100 will not be the peak of sea-level rise and that levels will continue to rise beyond this date given the amounts of greenhouse gases already emitted. This means that current levels could be as little as one-fifth of the eventual sea-level rise associated with a 2°C world. This has implications at regional levels and will lead to more frequent flooding from storm surges6, other impacts such as coastal erosion, and displacement of populations from low-lying regions.

While temperatures are on track to reach the halfway mark, and there is still some way to go in sea-level rise, emissions are already two-thirds of the way through the established budget if warming is to be limited to less than 2°C with a probability of greater than 66%.

There is a close association between global surface temperature increases and the total carbon emitted into the atmosphere. It is well established that the climate system response lags behind the point at which greenhouse gases are emitted to when the temperature has fully responded. The long lifetime of carbon dioxide (CO2) within the atmosphere means that we are already committed to further climate change from what has been emitted so far. According to IPCC AR57, the total size of the global carbon budget associated with limiting warming to less than 2°C above pre-industrial levels is up to 2900 gigatonnes of carbon dioxide (GtCO2)8. The cumulative amount of CO2 emitted so far since the industrial revolution is about 2000 GtCO29, and the emissions to date have increased the concentration in the atmosphere from around 275 ppm to about 400 ppm today. Based on this, our best current estimate is that around two thirds of the total carbon budget has already been used.

In addition to CO2, other greenhouse gases are also important. Emissions of methane and nitrous oxide have led to concentrations of these gases in the atmosphere exceeding the range of concentrations recorded in ice cores during the past 800,000 years. If warming is to be kept below the UNFCCC recommendation of 2°C above pre-industrial levels, the emissions of these gases will also need to be restricted.

There are also a number of additional Earth system feedbacks that could affect the future budget, including nitrogen cycle constraints on the carbon cycle, and emissions of greenhouse gases from permafrost and methane hydrates. These are expected to place further limitations on the total global carbon budget.

Although mitigation can avoid a sizeable fraction of the potential impacts of 21st century climate change, the degree of benefit varies with location and sector, and not all impacts can be avoided. Alongside mitigation, there will still be a need for adaptation but this is likely to be more manageable for a 2°C world than for greater levels of global warming.

Using model simulations we can assess what future climates might look like by assessing those with temperature rises of 2°C or 4°C by 2100. Climate models simulating a high emissions scenario (RCP8.5) show a global average temperature rise of around 4 °C or more by 2100. Model simulations based on scenarios with sustained and significant emission reductions through to the end of the century (RCP2.6) show global temperature rise limited to around 2°C or less.

The UK is likely to see a move, on average, towards more warm, wet winters and hot, dry summers in a warming world, according to climate projections from UKCP09. Recent updates from Sexton & Harris10 have highlighted that within these mean changes cold, dry winters and wet summers like 2012 are still possible but with declining likelihood.

Research into the likelihood of extreme seasons under the two scenarios indicate that by the 2040s a summer as hot as the 2003 European heatwave will be very common under both, and scenarios with the highest emissions suggest the 2003 summer will be considered an extremely cold event by the end of the century. The risk of such record breaking heatwaves is increasing rapidly and has increased ten-fold in little over a decade, even through a period of little warming in global mean temperatures11.

IPCC AR512 shows how mitigation can make a difference to sea-level rise, estimating that by 2100 a rise of 0.43-0.76m under a low emissions scenario (consistent with a 2°C rise in temperature) is reasonable, whereas under a high emissions scenario (consistent with a 4°C rise) the range increases to 0.67-1.13m13. Unlike for temperature change, it is not just the cumulative carbon emissions that count for sea-level rise by 2100; the pathway is also important as earlier warming leads to increased amounts of heat entering the ocean. Therefore, in order to mitigate sea-level rise as much as possible, emissions need to be reduced as soon as possible because earlier emission of the same total carbon has a larger effect on sea level by 2100 than later emission.

Plausible pathways to stay under 2°C

Research that takes account of both climate and socio-economic changes suggests that with a large-scale transition to a low carbon economy it is possible to limit warming to 2°C above pre-industrial levels. Simulations with integrated assessment models of the climate and energy system show robustly that the longer it takes to reduce emissions, the more expensive and difficult it becomes to stay within the 2°C limit. Early action would also reduce the reliance on unproven rates of technology deployment and even the use of new Carbon Dioxide Removal (CDR) technologies such as BECCS (Bioenergy with Carbon Capture and Storage), which is required in many of the low-emissions scenarios assessed by the IPCC AR5 WGIII.

The warmth of 2015 represents an important marker where global annual average surface temperature is set to reach approximately 1°C above pre-industrial levels for the first time. However, although temperatures are now about halfway to 2°C, sea-level rise is only at about one-third of the total that could be seen by 2100 as a result of a changing climate, and emissions are well over halfway through the budget that is likely to limit eventual warming to below 2°C. Even if strong mitigation were put in place immediately, the climate system is still committed to some further warming as it stabilises and reaches equilibrium. Further changes in the climate can be expected over coming decades in line with this warming trend. Alongside this adjustment, natural year-to-year variability of the climate system will also continue to affect weather patterns in the shorter term.

The Met Office Hadley Centre for Climate Science and Services works with the UK Government and partners across the world to monitor changes in the climate, to predict the likely scenarios of future climate change, and to further understanding of the impacts of these changes on both global and regional scales. It provides world-leading climate service tools and information that can inform decision making and help societies to manage the risks of a changing climate, in order to become more resilient and to benefit from opportunities for growth.

While late 19th century temperatures are commonly taken to be indicative of pre-industrial, there is no fixed period that is used as standard and a variety of other periods have been used for observational and palaeo datasets. There are limitations in available data in the early instrumental record, making the average temperature in the reference period less certain. There is not a reliable indicator of global temperatures back to 1750, which is the era widely assumed to represent pre-industrial conditions. Therefore 1850-1900 is chosen here as the most reliable reference period, which also corresponds to the period chosen by IPCC to represent a suitable earlier reference period.

8 To limit warming caused by CO2 alone to below 2 °C, with a probability of 66%, the IPCC assessed that a cumulative amount of up to 3670 GtCO2 (or 1000 GtC) could be emitted. When accounting for non-CO2 forcings such as other greenhouse gases then less CO2 can be emitted and the budget to limit warming below 2 °C is 2900 GtCO2.