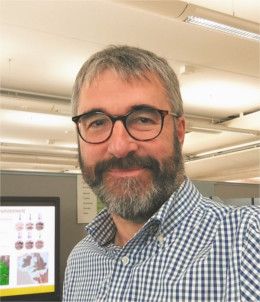 The work of Pete aims to enhance the use of existing and new satellite radiance observations in the weather forecasting process, via the development of value-added products from satellite image data, and also by way of the assimilation of these data into the Unified Model to improve our NWP (Numerical Weather Prediction) performance.

The SEVIRI instrument has flown on the EUMETSAT Meteosat Second Generation series of satellites since 2004, allowing geostationary images of the Earth's disc to be collected every 15 minutes, in both the solar and infrared spectral regions. These observations contain much valuable information relating to the atmosphere's temperature and humidity profiles; cloud distribution; surface properties, etc. Using these data, Pete has developed a number of value-added products which are used quantitatively in the Met Office's automated nowcasting systems, and also used as visual aids to our forecasters. Recently, these have included newly-developed satellite products for the detection of volcanic ash and determination of its physical properties.

A key aspect of Pete's work is to improve the assimilation of these satellite image data into the Met Office Numerical Weather Prediction models system. At present, most of the cloud-affected image data are not used by the Unified Model - while the cloud-free pixels are used to help improve our analyses of temperature and humidity in the Earth's atmosphere, the cloud-affected data are, more often than not, discarded. Pete is currently looking at ways of using both the clear and the cloudy image data in the assimilation process, to improve the model's humidity and cloud analyses, and hence improve our forecast skill.

Pete has been working in the Met Office's Satellite Applications group since 2001, primarily carrying out research using MSG data.

Before this, he spent 10 years working at the Met Office's Meteorological Research Flight facility (the precursor to FAAM), based at Farnborough. Here, he carried out research into the radiative properties of clouds and aerosols, primarily based on in situ measurements taken from the Met Office's C-130 research aircraft, work that included the planning and organisation of the aircraft's involvement in several international field campaigns.

Before joining the Met Office, Pete gained a DPhil at Oxford University, using aircraft data to study the radiative properties of clouds. As an undergraduate Pete received a degree in Physics, also from Oxford University.

Between 2006 and 2012, Pete served as an Associate Editor for the Quarterly Journal of the Royal Meteorological Society.

Since 2011, Pete has acted as the UK delegate on the EUMETSAT STG-Science Working Group.

Pete was awarded the L G Groves Memorial Prize for Meteorological Observation in 2012.