Forecast for July to November 2008

15 tropical storms are predicted as the most likely number to occur in the North Atlantic during the July to November period, with a 70% chance that the number will be in the range 10 to 20. This represents above-normal activity relative to the 1990-2005 long-term average of 12.4.

Note: The forecast is for the five full months remaining in the June-November Atlantic tropical storm season. There has already been one named storm - Arthur. 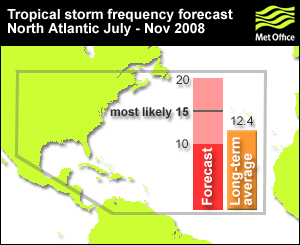 To purchase the forecast report for 2009 (available in June 2009) please email [email protected] or contact our Contact us.

At the start of every North Atlantic season (which usually runs from June to November) the Met Office forecasts the number of tropical storms expected throughout the period. This is done using a dynamical seasonal prediction model (called Met Office seasonal prediction system: GloSea4) which simulates the ocean-atmosphere processes and interactions that determine tropical storm development. Many GloSea forecasts are made (using 'ensemble' forecasting methods) to allow estimation of the range of likely outcomes. In contrast, statistical prediction methods, which have traditionally formed the basis of most published predictions, do not model atmospheric processes, but rely on past relationships between storm numbers and preceding observed conditions (e.g. pre-season SST patterns).

Because the dynamical model grid does not fully resolve relatively small features such as tropical storms, an adjustment is made using storm counts from past forecasts and observations. The GloSea forecast implicitly includes predictions of the sea-surface temperature (SST) anomalies. This season GloSea predicts a warming trend in SST in the tropical North Atlantic, which favours above-average activity. However, continued warming in the tropical east and central Pacific is also predicted. Warm SST in this region tends to suppress tropical storm activity in the North Atlantic. Overall, more tropical storms are predicted this season than seen in the last two seasons (see table above). The competing influences of forecast SST in the tropical Pacific and North Atlantic are consistent with the wide 70% range in this year's forecast.

Recent studies have shown that GloSea and other European models have considerable skill predicting the number of tropical storms - for example successfully predicting the change from the exceptionally active season of 2005 to the below-normal activity of the 2006 season. Last year the North Atlantic tropical storm seasonal forecast 2007 was for 10 storms with a 70% probability range of 7-13; in the event, 12 storms were observed to occur.

The forecast has been produced following research collaborations with the European Centre for Medium-Range Weather Forecasts (ECMWF).

During the 2008 Atlantic season there was a total of 15 named storms in the July-November time frame. This exactly matched the most likely number predicted in the Met Office forecast issued in June. There was one additional storm in May/June making a total of 16 for the season, which is above the long term average. 2008 was much more active than both the previous two seasons. Download a full report on the

The Met Office will issue a forecast for the July-November 2009 period in June 2009.