An overview of the latest operational improvements to our models suite

We regularly update our model suite, typically twice a year. These are known as ‘parallel suites’, becoming ‘operational suites’ upon implementation. The next Parallel Suite, 43 (PS43), is due to go operational mid-November. Upgrades to the Unified Model vary from parallel suite to parallel suite with some offering significant forecast skill improvements or large changes whist others may offer technical changes, such as more elegant coding or code updates, rather than a direct impact on forecast skill. 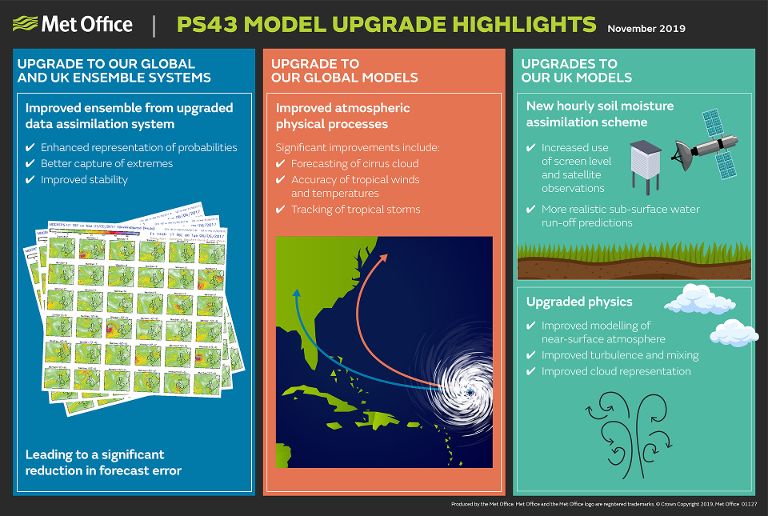 PS43 introduces atmospheric physics upgrades to both the global and regional NWP models. In the global model there are changes to improve boundary-layer processes, the representation of cloud, radiation, warm rain microphysics, and deep convection, whilst in the regional models there are improvements to the treatment of lying snow, sub-grid turbulence and ice cloud fraction in mixed-phase clouds.

The main goal of PS43 is to introduce the new En-4DEnVar scheme to the global ensemble. En-4DEnVar provides an ensemble of initial conditions which are generated through their own data assimilation cycles and provides a more sophisticated and stable method of producing probabilistic forecasts than the previous operational scheme. Its introduction leads to better ensemble probability forecasts with improved spread and reduced forecast errors. Because the resulting ensemble spread is also used in the assimilation stage of the deterministic Global Model, the improvements introduced here also have a positive impact on the initial analysis of the deterministic Global Model.

The global package for PS43 is a significant upgrade to key components in the global NWP suite. The ensemble upgrade delivers improvements to both the ensemble probabilistic verification scores and also to the ensemble’s stability against model failures. The atmospheric model physics configuration is upgraded, targeting more realistic modelling of observed physical processes in the atmosphere. Several improvements in data assimilation make better use of satellite observations, which leads to improved analyses and forecast scores.

However, please note that the Global deterministic model run is expected to end around 4 minutes later than the current operational model and the global ensemble (MOGREPS-G) approximately 15 minutes later.

The global ensemble (MOGREPS-G) is being upgraded to replace the current Ensemble Transform Kalman Filter (ETKF) scheme, responsible for creating its initial perturbations, with an ensemble of 4D-ensemble-vars (En4DEnVar). En-4DEnVar is essentially an ensemble of different initial conditions (i.e. analyses), each generated through its own data assimilation (DA) cycle; this allows the model to produce different forecasts for the same period, provide useful information about the uncertainty in the forecast, and to provide objective probabilities of specified events. The main advantage of En-4DEnVar is that it is more sophisticated than the ETKF scheme and delivers a more stable ensemble forecast system which is more robust against model failures. It also uses similar code and scientific methodology to the deterministic forecast model’s data assimilation scheme. This change leads to more realistic initial ensemble perturbations and hence better probabilistic forecasts. These perturbations also better represent the flow-dependent background forecast errors used in the deterministic model’s DA, leading to a better global analysis. With subsequent tuning (aimed at a later parallel suite) this is expected to further improve deterministic forecasts.

A new “additive inflation” scheme (based on an archive of information from previous DA cycles) controls the growth of ensemble spread during the forecast, addressing a long-standing issue of too-little ensemble spread in MOGREPS-G forecasts. The scheme also includes a bias-correction term in the ensemble forecasts which is a new and effective way to reduce systematic forecast errors and thus improve forecast verification scores.

There is improved use of satellite data, with new radiometers assimilated for the first time that provide, amongst other variables, information on low level humidity. Extended use of existing microwave sounder instruments, with channels sensitive to middle and upper level tropospheric humidity is used over the land surface for the first time. Another notable change in the package is the extended use of low-level atmospheric wind vectors in the GOES east data region. Soil moisture data assimilation uses an updated scientific configuration to make it more consistent with the forecast model.

In addition to the ensemble changes, the physics in the model has been upgraded to the Global Atmosphere 7.2 (GA7.2) configuration. This is the first major global physics change since the implementation of ENDGame at PS34. It follows several years of development and investigation into forecast performance to develop a package that is suitable for implementation in the operational global NWP suite.

The package includes changes to improve deep convection, the representation of cloud, radiation, warm rain microphysics and boundary-layer processes. Of particular note, excessive thin cirrus cloud has been reduced, and improvements to the way mixing is represented in the boundary layer under certain cloud regimes has corrected a long-standing problem of unrealistic temperature profiles. In the tropics and sub-tropics, convection has more realistic structure and spurious light rain/drizzle is reduced. Improvements in the representation of warm rain microphysics results in a reduction in the amount of spurious light drizzle that is especially notable in subtropical regions. Tropical deep convective cloud tops are realistically deeper. The current operational forecasts have significant cloud biases, which are improved considerably in GA7.2, particularly reducing a positive cloud bias near the mid-latitude tropopause. The combined physical improvements in the representation of cloud result in cloud fractions for high cloud that are more graduated and less binary in nature.

Mid-latitude temperature and geopotential-height scores show a small increase in errors. Subjective assessment shows that this is largely attributed to a small increase in errors during forecast events where errors already exist. There is no expectation that this will increase the number of cases of poor forecasts. The impact of this package on surface weather parameters, including precipitation, 10m wind-speed and 2m-temperature is small, with no significant improvements or detriments.

The UK package comprises an upgrade to the model’s physics, numerous satellite assimilation updates and introduction of an independent soil moisture assimilation. The MOGREPS-UK ensemble spread is improved by the global ensemble change, especially in summer. There are mixed verification signals in other respects, as detailed below.

There are several updates in data assimilation and the use of observations. The source of soil moisture data is changing. Instead of the current daily interpolation of global soil moisture analyses followed by free-running soil moisture evolution, we are introducing the UKV's own hourly soil moisture assimilation via the same Extended Kalman Filter (EKF) technique as for the global model. The EKF uses the JULES land surface model to help derive increments to soil moisture from ASCAT satellite observations and screen-level errors in temperature and humidity. The EKF brings a substantial improvement in sub-surface run-off, with a knock-on benefit in simulated river flow of potential value in coupled modelling.

There are several satellite data changes. These include introduction of microwave humidity data and microwave imager data. Optical thickness will now be used to specify the thickness of GeoCloud cloud fraction observations inserted in daytime, with thickness still taken from a model climatology at night. Extra screen-level visibility observations are now assimilated, which were previously flagged as inconsistent with collocated relative humidity observations. For Doppler radar radial wind observations, the correlation of observation errors is now explicitly accounted for during assimilation.

There are changes to the MOGREPS-UK schedule with model run start times advancing from hh+3hr30 to hh+1hr30. This means that we take quicker advantage of the latest hourly UKV analysis for initial conditions. It does also mean that the set of MOGREPS-UK runs driven by a given MOGREPS-G run shifts in time. For example, at OS42, the 03-08 UTC runs are driven by 00 UTC global boundary data (and initial perturbations), whilst at PS43 it will be the 05-10 UTC runs driven by 00 UTC global data. In the Random Parameter formulation of stochastic physics, we introduce new variability in convective mixing parameters within the turbulence scheme.

In terms of model formulation, the major change is introduction of the Regional Atmosphere 2 (RA2) physics package. This includes improvements to the treatment of lying snow, sub-grid turbulence and ice cloud fraction in mixed-phase clouds. Of particular note, and as a result of the improved sub-grid turbulence, unrealistically high maximum surface temperatures which could occur under certain circumstances are expected to have been significantly improved..

The impact of PS43 UKV changes on forecast performance is small. In summer, there is a small signal for improved cloud, and as a result, a slightly reduced diurnal range in screen temperature. The soil moisture assimilation improves screen-level humidity. In winter, there is again a signal for slightly improved cloud and a small benefit in visibility in the <4km range early in the forecast coming from the extra observations assimilated (also assessed subjectively). An improvement in precipitation spin-up in the first couple of hours is evident from a cloud-related change in RA2.

Impact on MOGREPS-UK performance of MOGREPS-UK (and UKV) changes is also small. In summer, there is an improvement in 10-metre wind and cloud, with a slight detriment in screen-temperature. Impact is weak in the range t+48-120. In winter, wind verification is slightly detrimental and visibility is improved through the forecast range. For screen-temperature and cloud, minor improvements early in the forecast shift to minor detriments beyond about t+18.

The incremental impact of the PS43 global upgrade on UKV performance is neutral in winter, with only small impacts in variables of interest.

The incremental impact of the PS43 global upgrade on MOGREPS-UK varies with season. In summer, spread is improved, but in winter, the increase in spread is much smaller. In both summer and winter, the impact on skill is mostly beneficial up to ~t+72 and mostly detrimental thereafter (winter is a little more mixed). The small detriment in verification of some fields in the deterministic UKV model is judged to be outweighed by the value of the improvements to the MOGREPS-UK ensemble.