Heatwave thresholds have been met across large parts of the country - 34.3°C was reached in Writtle, Essex on Wednesday and as hot air continues to push up from the Continent temperatures will rise further today.

Heatwaves are extreme weather events, but research shows that with climate change they are likely to become more frequent. Met Office projections show that heatwaves with the intensity of last summer's event could occur on average as regularly as every other year by the middle of the century.

A Met Office study into the UK heatwave last summer showed that it was 30 times more likely to occur now than in 1750 because of the higher concentration of carbon dioxide (a greenhouse gas) in the atmosphere. The Earth’s average surface temperature has risen by 1°C since the pre-industrial period (1850-1900), but the average temperature in some regions have increased by a greater amount. The average temperature in North Africa, for example, has increased by 2 °C over the same period. 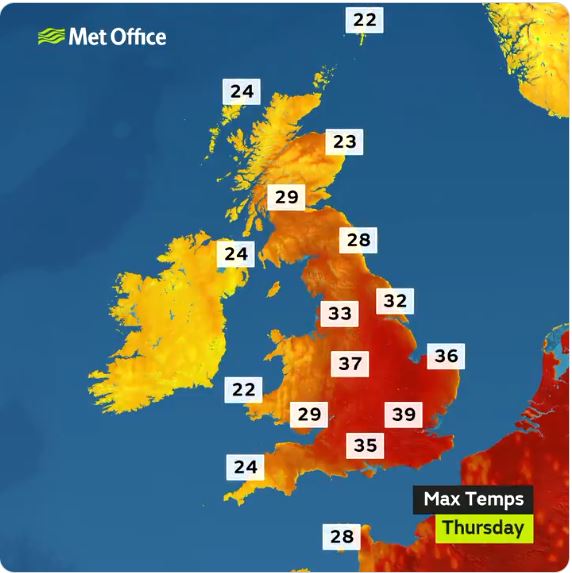 Chief Meteorologist Steve Willington said: "There is a real possibility of records being broken today, not only for July but also all-time records. The weather setup is broadly similar to the pattern that brought high temperatures to much of continental Europe at the end of June. The difference this time is that the wind flow will be more directly from France, paving the way for some exceptional, perhaps record-breaking temperatures. As well as high temperatures during the day, overnight temperatures will also be notably warm and could also break records. Conditions will feel much more comfortable for western parts of the UK by the time we get to Friday."

Temperatures will quickly rise today (Thursday) in strong sunshine and it'll become very hot across central, eastern and southern parts of the UK, with a record-breaking 39°C possible in south east England. The current July record is 36.7°C set at Heathrow in 2015 and the all-time UK temperature record is 38.5°C recorded in Faversham in August 2003.  The heat is likely to trigger scattered thunderstorms from late afternoon onwards and the Met Office has issued a yellow National Severe Weather Warning for large parts of the UK.   Tonight will be another very warm night, making it uncomfortable to sleep, with potentially record-breaking overnight temperatures of 24°C overnight into Friday. The previous record is 23.9°C set in August 1990. Last year the Met Office included a new 'tropical nights' measure, charting overnight temperatures of 20 °C or more. This is infrequently met at the moment, but the frequency is expected to increase with the ongoing rise in global temperature.

All-time national maximum temperature records are being broken across parts of Europe this week, in particular in Belgium and the Netherlands, as temperatures continue to reach into the low to mid 40s Celsius in some parts of Europe.

Owen Landeg, Principal Environmental Public Health Scientist at Public Health England said: “Much of the advice on beating the heat is common sense and for many people spells of warmer weather are something they very much enjoy. However, for some people, such as older people, those with underlying health conditions and young children, the summer heat can bring real health risks. That’s why we’re urging everyone to keep an eye on those you know who may be at risk this summer.

"If you’re able, ask if your friends, family or neighbours need any support. Also take water with you when travelling and keep up to date with weather forecasts.

"It’s also worth remembering to think about practical steps to keep homes cool during the day as this can aid sleeping at night and give the body time to recover from the heat.”

After Thursday’s peak heat temperatures are expected to return closer to normal as we head through the weekend, with the weather becoming more unsettled and an increased chance of showers for many eastern and north-eastern areas.