Heatwave continues for parts of UK

Very hot weather will last into next week for southern and eastern parts of the country, with warm weather elsewhere.

Temperatures reached widely above 30 Celsius for much of England and parts of Wales on Friday and Saturday (August 7th and 8th) with similar temperatures expected on Sunday.  It was exceptionally hot in southeast England on Friday, where a maximum of 36.4 C was recorded at both Heathrow and Kew Gardens, Greater London, making it the warmest August day since 2003.

Away from the heat across northwestern parts of the UK, it’ll be a fine weekend with spells of warm sunshine and temperatures into the mid-twenties for northern England and low twenties for Scotland and Northern Ireland.

Met Office Chief Meteorologist Andy Page, said: “Much of southern England and eastern areas of Wales will see the heatwave continue until the middle of next week, with temperatures widely into the low to mid 30’s Celsius.

“We’ve got a few exceptionally warm and humid nights ahead this weekend too, which could come close to record-breaking, as temperatures overnight remain above 20 Celsius in parts of south east England.” 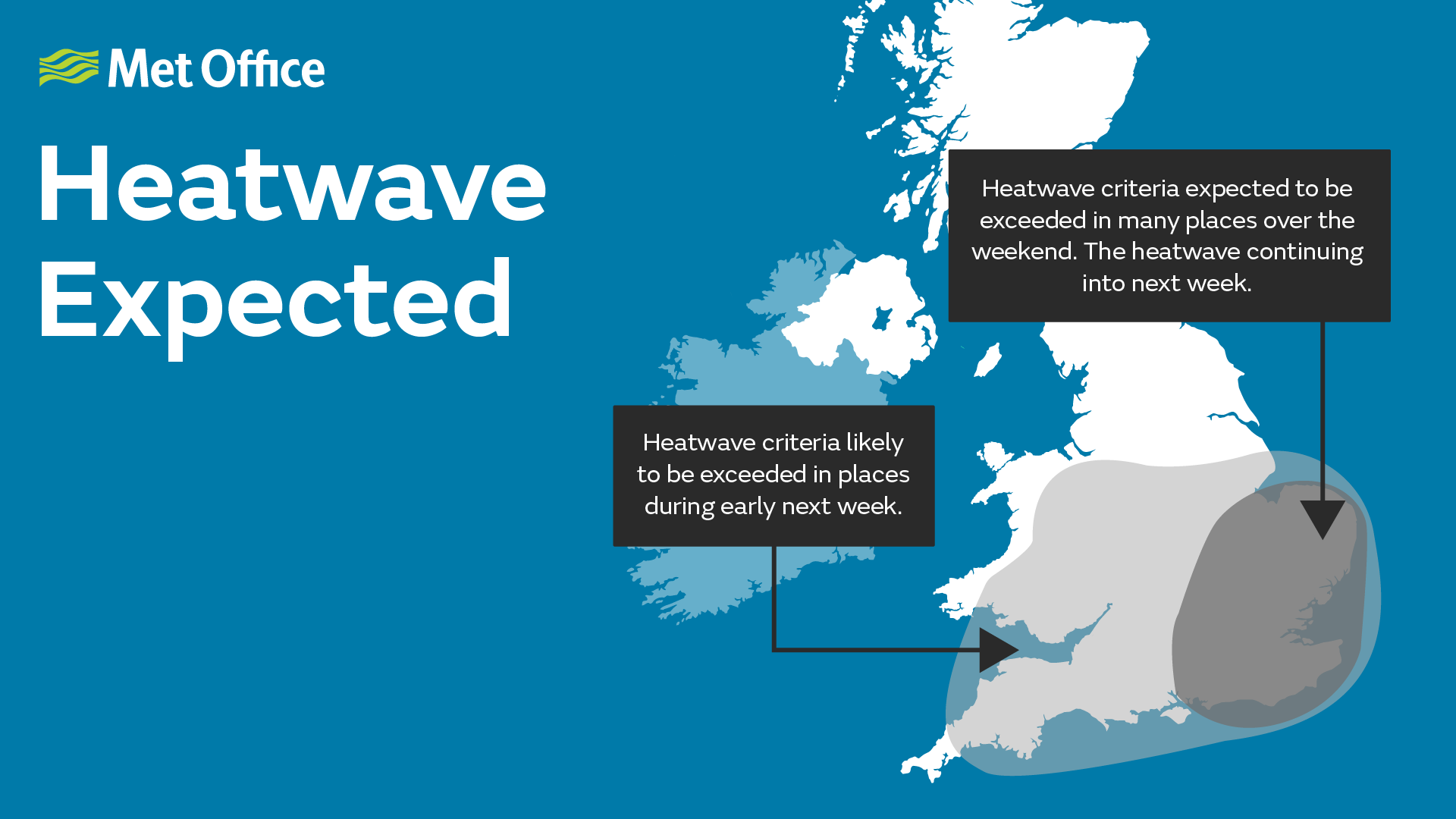 Deputy Chief Meteorologist, Dan Harris, said: “Whilst the extreme heat is likely to gradually decline through next week, we are also expecting the risk of thunderstorms to increase, with the potential for downpours of up to 80mm in just a few hours. On any particular day however, a lot of places will miss these altogether.

“We’ve issued a broad thunderstorm warning for Monday, Tuesday and Wednesday for all parts of the UK, since although the ingredients are there, it's just too early to pinpoint the details of exactly where and when thunderstorms will occur.  As such, we will be monitoring the developing signals closely and I urge people to keep a close eye on Met Office warnings and forecasts over the coming days.”

Thunderstorms are expected across the UK on Monday and Tuesday

Details are still uncertain, but where thunderstorms develop they could be torrential

The Met Office has issued a heat health alert for parts of England into next week and you can find tips on staying cool in hot weather on the Met Office website.  With strong summer sunshine at this time of year, UV levels will be high in some areas and you can check the UV forecast for your area here.

Ishani Kar-Purkayastha, Consultant in Public Health at Public Health England, said:  “Many of us welcome warmer weather, but some people may find it more difficult to cope. People recovering from COVID-19 at home, those who are self-isolating, older people and people with underlying health conditions are all more vulnerable during hot weather.

“This summer, many of us are spending more time at home due to COVID-19. A lot of homes can overheat, so it’s important we continue to check on older people and those with underlying health conditions, particularly if they’re living alone and may be socially isolated.

“If you need to provide direct care to someone at risk from hot weather, follow government guidance on how to do this safely. The most important advice is to ensure they stay hydrated, keep cool and know how to keep their homes cool.”

Heatwaves are extreme weather events, but research shows that climate change is making these events more likely. A scientific study by the Met Office into the Summer 2018 heatwave in the UK showed that it was 30 times more likely to occur now than in 1750 because of the higher concentration of carbon dioxide (a greenhouse gas) in the atmosphere. As greenhouse gas concentrations increase heatwaves of similar intensity are projected to become even more frequent, perhaps occurring as regularly as every other year. The Earth’s surface temperature has risen by 1°C since the pre-industrial period (1850-1900)