Glastonbury Festival - will the sun continue to shine?

Day one of the festival was sunny, temperatures reaching almost 27C in nearby Yeovilton, but it's now becoming more unsettled.

Met Office Chief Forecaster Paul Gundersen said: “Our advice would be to have raincoats at the ready for the rest of the festival. After a warm and, at times, sunny start to Thursday it will turn cloudier and there will be an increasing risk of thunderstorms through the afternoon and evening bringing a risk of torrential downpours.

“The exact location of the heaviest of these showers is still uncertain, but people can so stay up to date with the latest forecast and warnings through our website or app.”

Tips for staying safe in thunder and lightning:

- Stay away from water and trees
- Avoid golf, fishing and boating
- Be aware of objects that conduct lightning like umbrellas
- Touch as little of the ground as possible

For Friday and the weekend, the weather will become cooler and more unsettled. The risk of heavy showers and thunderstorms continues in the Glastonbury area, and although these should be quick moving, some surface water might accumulate at times from the heaviest showers. Temperatures will return to near normal for the time of year, with highs likely around 18-20C by the weekend. It will become breezier over the weekend.

The unsettled pattern is expected to continue to dominate into the start of next week.

You can keep up to date with the latest forecast on our website, by following us on Twitter and Facebook, as well as on our mobile app which is available for iPhone from the App store and for Android from the Google Play store. Keep track of current weather warnings on the weather warning page. 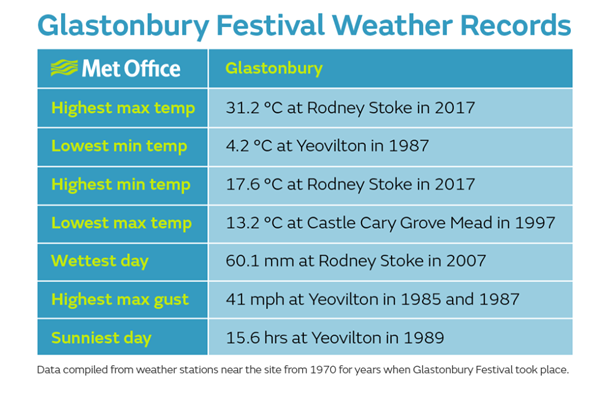 The first Glastonbury Festival took place in September 1970 and using Met Office data from nearby weather stations, the records tell a story of some unforgettable festivals.

In what will come as no surprise to anyone who was there, Glastonbury 2007 holds the record for the festival’s wettest day. 60.1mm of rain fell in a single day at nearby Rodney Stoke.

For other unsettled weather, the highest wind gust speed recorded for Glastonbury was 41mph, which has been reached at Yeovilton in 1985 and 1987 during the event.

Although 1997 was dubbed the ‘year of the mud’ on the Glastonbury website thanks to a deluge of rain in the days preceding the event, it actually holds the record for the coldest festival day with 13.2°C as high as the temperature reached at Castle Cary Grove Mead.

In 2017, with The Foo Fighters headlining, the mercury reached a balmy 31.2°C at Rodney Stoke, while the warmest night was recorded in the same year, with 17.6°C at the same location.

The sunniest day of Glastonbury on record was in 1989, when a station at Yeovilton recorded approximately 15 hours and 36 minutes of sunshine.

Check out tips for keeping cool in hot weather or how to cope in heavy rain as part of WeatherReady from the Met Office.