It is now possible to confirm that 2022 was the UK’s hottest year on record, with an average temperature of over 10°C recorded for the first time.

An attribution study conducted by Met Office scientists has shown that what would have been around a 1-in-500 year annual temperature in a natural climate, where human climate influences are removed, is now likely every three to four years in the current climate.

An early announcement declared 2022 was going to be the hottest year on record for the UK. With the full year’s data, it is now possible to confirm the annual mean temperature.

Met Office Climate Attribution Scientist, Dr Nikos Christidis, said: “To assess the impact of human induced climate change on the record-breaking year of 2022, we used climate models to compare the likelihood of a UK mean temperature of 10°C in both the current climate and with historical human climate influences removed. The results showed that recording 10°C in a natural climate would occur around once every 500 years, whereas in our current climate it could be as frequently as once every three to four years.

“We also used climate models to project how often this sort of temperature could be recorded in the future. It was possible to calculate that by the end of the century, under a medium emissions scenario (SSP2-4.5), a UK average temperature of 10°C could occur almost every year.”

In addition, 2022 was also the warmest year on record in the 364-year Central England Temperature (CET) series from 1659, the world’s longest instrumental record of temperature. The annual mean CET for 2022 was 11.1°C, only the second time it has recorded 11°C or higher in its history with 2014 recording 11°C.

Records in all nations

After a notably warm start to the year in 2022, with New Year’s Day the warmest on record, the mild theme was replicated through much of the year with many more warmer than average days than cooler than average days. The annual mean temperature reached record breaking levels during the exceptional heatwave in July and despite a notable cold spell in December remained at record levels for the year overall.

Every nation in the UK recorded a record breaking annual mean temperature in 2022:

Head of the Met Office National Climate Information Centre, Dr Mark McCarthy, said: “Although an arbitrary number, the UK surpassing an annual average temperature of 10°C  is a notable moment in our climatological history. This moment comes as no surprise, since 1884 all the ten years recording the highest annual temperature have occurred from 2003. It is clear from the observational record that human induced global warming is already impacting the UK’s climate.” 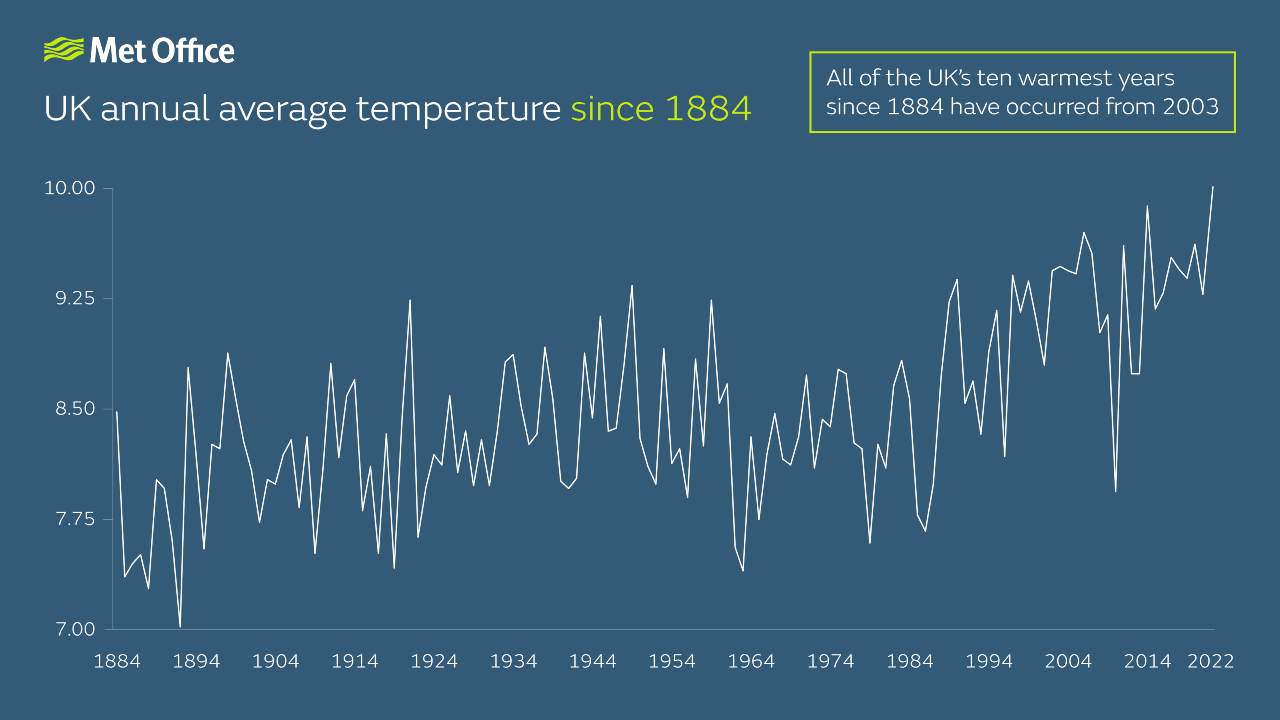 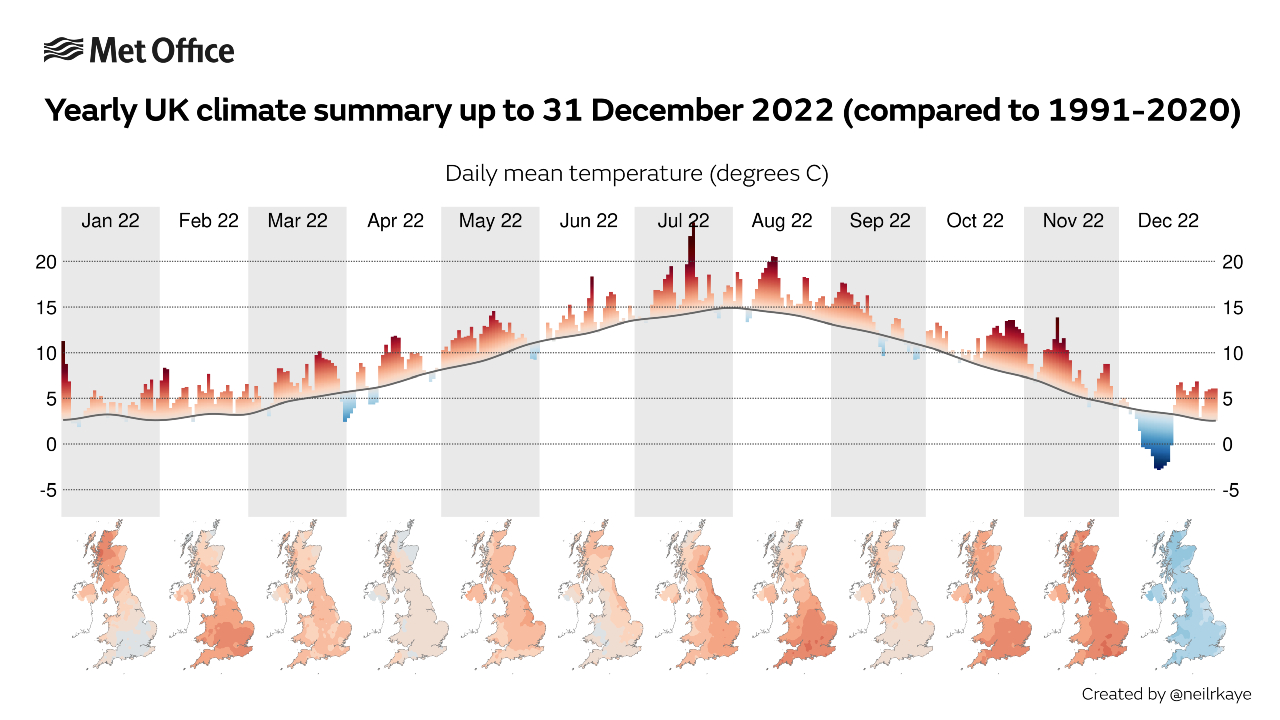 The evidence of the UK’s changing climate can also be seen in the distribution of hot and cold annual records. Since 1884, all the ten warmest years have occurred from 2003. In the same timespan we’ve not recorded a top ten coldest year in 60 years (1963 ranks as the fourth coldest year in the series), and most of the top 10 coldest years are clustered before 1920 as shown in the graph below. 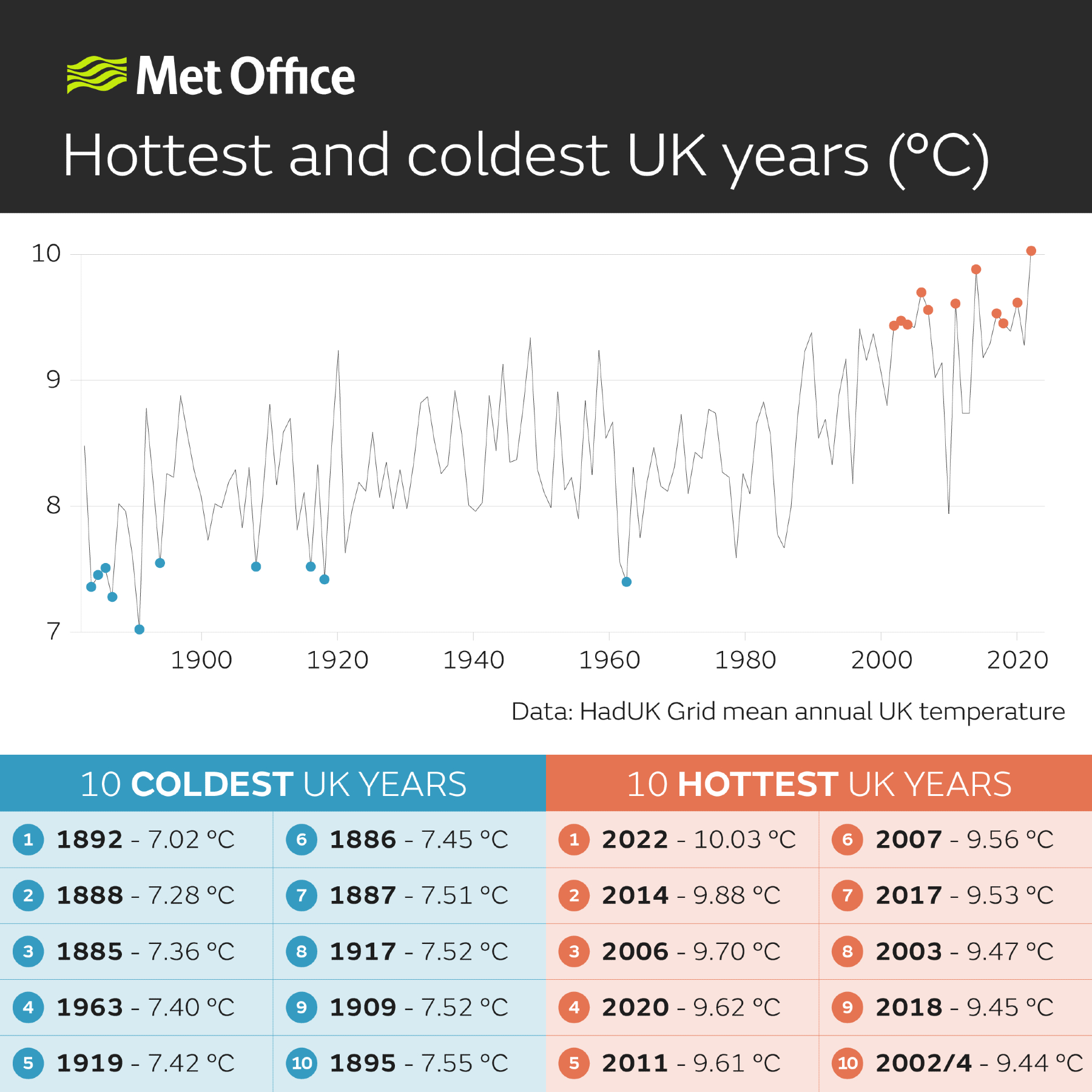 Dr McCarthy explains: “Even with the influence of climate change we don’t expect every year to be the hottest on record from now on. Natural variability of the UK climate means there will always be some variation year to year, however looking at longer term trends it is easy to pick out the influence climate change is having over time.”