Human actions, including increased greenhouse gas levels and changes to land use, are causing our planet to warm. We have already seen average global land temperatures increase by over 1 °C since the Industrial Revolution.

As a result of this baseline increase in temperature, we are seeing a reduction in the intensity and likelihood of cold events. Whilst a 1 °C background temperature increase may not seem significant, changes in extreme temperature events are already notable in the observed record.

Extreme cold events still occur within natural climate variation due to changes in global weather patterns. However, the decrease in the frequency, duration, and intensity of these events over recent decades is clearly linked to the observed warming of the planet and can be attributed to human activity.

Events such as Sudden Stratospheric Warmings (SSWs), which can lead to cold conditions across the UK in winter, are also affected by the changing climate. However, how these events are likely to change in the future is less well-understood compared to average surface temperatures due to their complexity.

These events and global circulation patterns influence our weather and can still lead to extreme cold events occurring even while average temperatures increase. We expect that as the planet continues to warm, these extreme cold events will continue to become rarer and less severe.

The number of icing days (when the daily maximum temperature stays below 0 °C) has been decreasing since the 1960s. During 2008-2017 a significant area of the UK has had less than one icing day per year on average, compared to the long-term average of about 5.

These long-term trends, combined with detailed attribution studies, point to a long-term warming trend of the UK’s climate and a reduction in cold events. One study showed that the chance of experiencing a December as cold as the one in 2010 is about half of what it was in the 1960s.

UKCP18 projects that the UK will experience warmer, wetter winters and hotter, drier summers on average. Colder than average winters and summers will become less likely the further we go into the 21st century. A study that included an analysis of snow events found that what was a one-in-50-year snow event in a pre-industrial climate will have almost zero probability of occurring by the end of this century.

Another study analysed the changing risk of high impact weather, including days of air frost. It found that as the global temperature increases, the average number of days of frost across the UK will decrease. 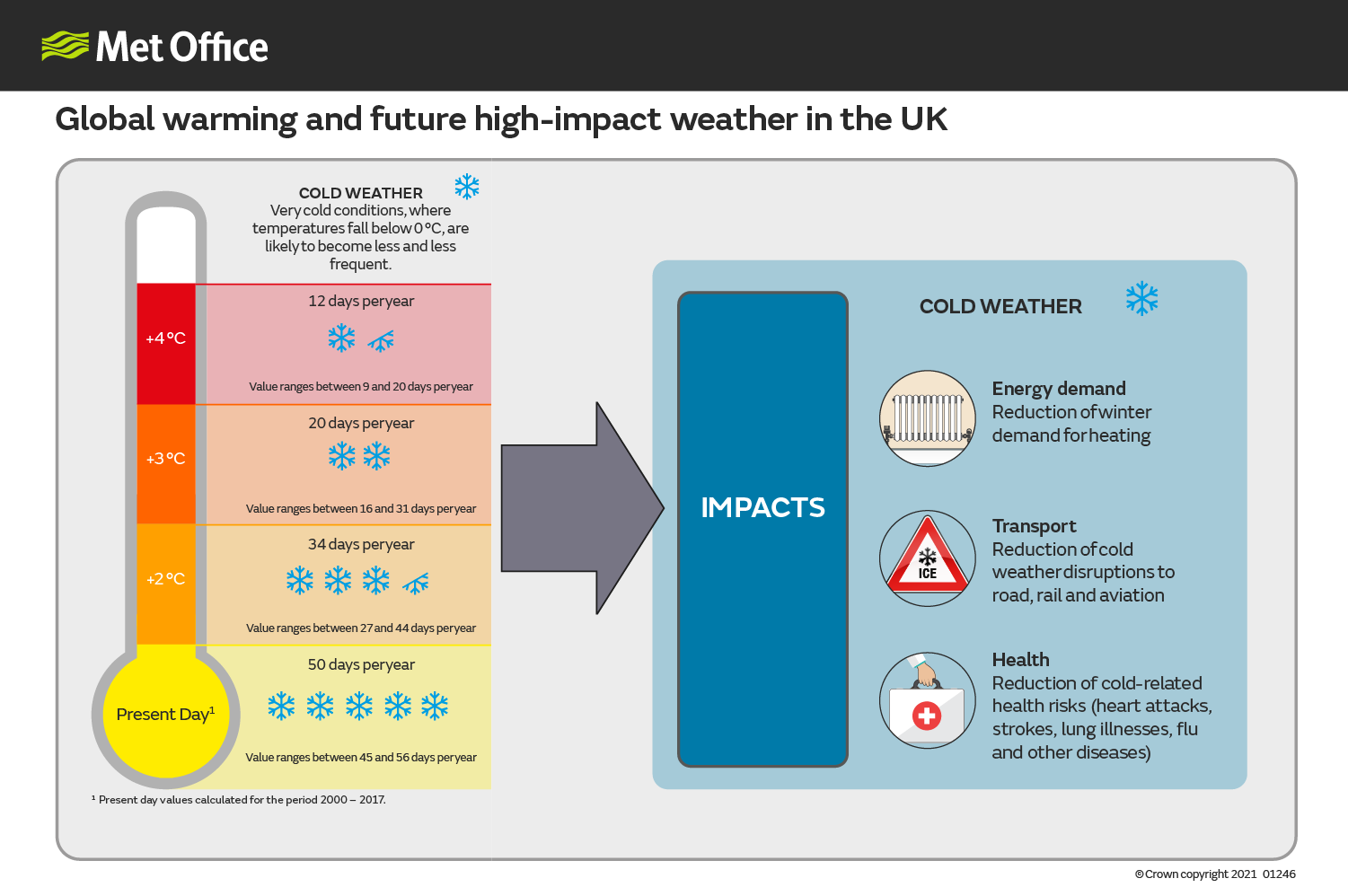 As global temperatures rise, the number of frost days are expected to decrease. Data available here.

However, it is likely the risk of cold extremes will not disappear completely, and cold weather adaptation will still be necessary by the government and industry. More details of the UK government’s plan to adapt and mitigate the worst effects of climate change can be found in the UK National Adaptation Programme.

The latest Intergovernmental Panel on Climate Change (IPCC) Sixth Assessment Report (AR6) stated it is virtually certain (over 99% probability) that there has been a decrease in the number of cold days and nights around the world since 1950. There is also very high confidence that spring snow cover extent in the Northern Hemisphere has decreased substantially since 1978. 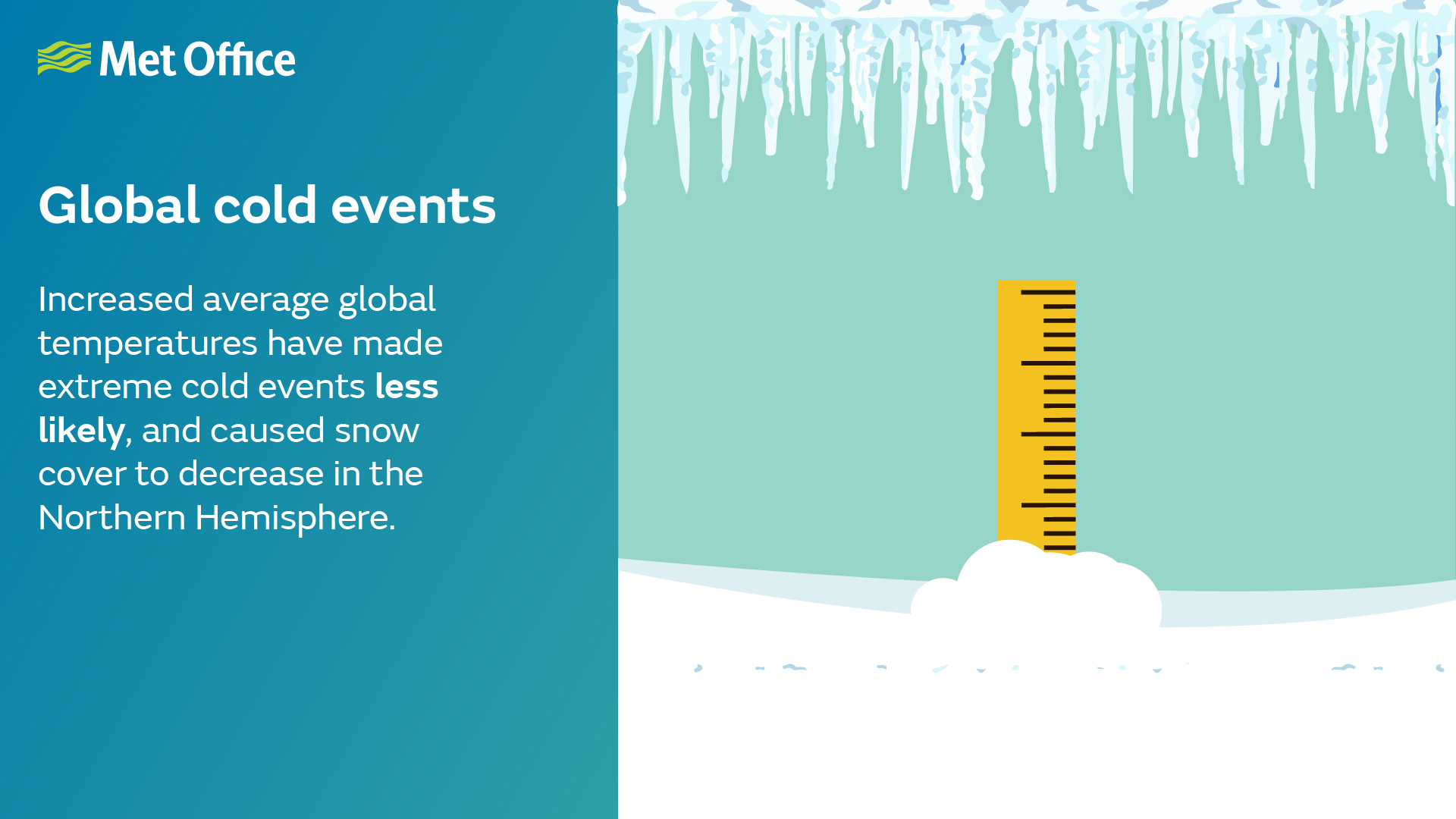 Cold events are less likely and the Northern Hemisphere has less snow cover.

Most studies that have looked at cold events show that human activity has made them less likely. They also suggest that without climate change to date these events would have been colder with potentially more impacts.

The IPCC AR6 report states it is virtually certain that, in most places, there will be fewer cold temperature extremes as global mean temper­atures increase.

There is high confidence the coldest days are expected to warm by about three times the rate of global warming in the Arctic. However, occasional cold extremes will still likely occur regionally, driven by atmospheric weather patterns.