It is widely accepted that the volume of Arctic sea ice has on average been declining over the last thirty years. However, the extent of the sea ice cover in the Arctic remains variable as synoptic weather conditions play a role in determining the growth and melt of sea ice and its movement within the Arctic basin. Arctic sea ice reaches its minimum extent in September and we are currently participating in the Sea Ice Prediction Network international effort to provide a community-wide summary of the expected September mean Arctic sea ice.

The sea ice outlook includes estimates of September mean sea ice extent from dynamical, statistical and heuristic methods which are combined to provide the median of the estimates. Since 2010, the Met Office has provided an estimate based on our seasonal forecast system. The estimated sea ice extent (for the forecast started in June, unless otherwise specified) from the  sea ice outlook for 2010 onwards is shown in the table:

Met Office contribution to the outlook

Given current capabilities for seasonal forecasting of sea ice, we consider our contribution to the outlook as an experimental forecast. A prediction of regional-scale ice coverage is beyond the capabilities of current long-range forecasting. Therefore our estimates are restricted to the extent of the Arctic sea ice. This is defined as the area of the Arctic Ocean with at least 15% ice coverage. In the long-term average, this area varies from 14.4-16.5 million km2 in March to 3.6-8.0 million km2 in September (based on data for 1979-2017). The minimum extent for September since 1979 (the satellite period) was 3.6 million km2 in 2012, almost 20% below the previous lowest ice extent of 4.3 million km2 in 2007.  March 2017 represented the lowest March maximum during the satellite period, with a maximum extent of 14.4 million km2.

The July outlook for September 2022 sea ice extent, based on the ensemble mean of 42 forecasts, is 4.4 milion km2 with an uncertainty of 1.2 million  km2. Shown below are our forecast ice extents (blue circles) compared to the observed ice extents during the 1993-2016 period (black squares) with the most recent forecast shown as a red diamond. 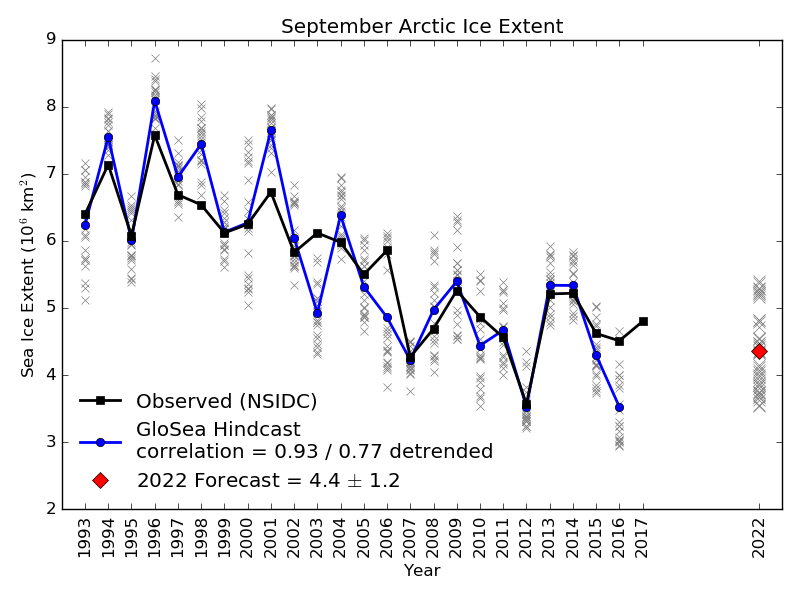 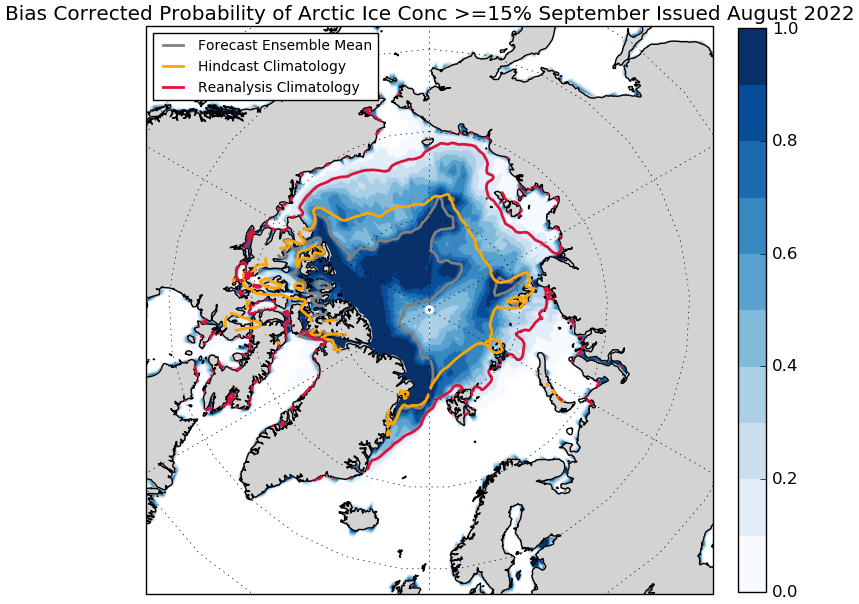