Tropical cyclones are one of the most dangerous natural hazards to people. Every year, they cause considerable loss of life and do immense damage to property. However, tropical cyclones are essential features of the Earth's atmosphere, as they transfer heat and energy between the equator and the cooler regions nearer the poles.

What is a tropical cyclone?

A tropical cyclone is the generic term for a low pressure system over tropical or sub-tropical waters, with organised convection (i.e. thunderstorm activity) and winds at low levels circulating either anti-clockwise (in the northern hemisphere) or clockwise (in the southern hemisphere). The whole storm system may be five to six miles high and 300 to 400 miles wide, although sometimes can be even bigger. It typically moves forward at speeds of 10-15 m.p.h., but can travel as fast as 40 m.p.h. At its very early and weak stages it is called a Tropical Depression. When the winds reach 39 m.p.h. it is called a Tropical Storm. If the wind should reach 74 m.p.h. or more the tropical storm is called a Hurricane in the Atlantic and the eastern North Pacific or a Typhoon in the western North Pacific. In other parts of the world, such as the Indian Ocean and South Pacific the term Cyclone or Tropical Cyclone is used.

How do tropical cyclones form?

Within this area of low pressure the air is heated over the warm tropical ocean. This air rises in discrete parcels, causing thundery showers to form. These showers usually come and go, but from time to time, they group together into large clusters of thunderstorms. This creates a flow of very warm, moist, rapidly rising air, leading to the development of a centre of low pressure, or depression, at the surface.

The Coriolis force caused by the rotation of the Earth helps the spin of this column of rising air. The development of the surface depression causes an increase in the strength of the trade winds. The spiralling winds accelerate inwards and upwards, releasing heat and moisture as they do so.

As the depression strengthens it becomes a tropical storm and then a hurricane or typhoon. A mature hurricane or typhoon takes the form of a cylinder of deep thundercloud around a centre that is relatively free from clouds. There is a relatively small area of intense horizontal winds at the surface, often well over 100 m.p.h., while air rises strongly above, maintaining the deep cumulonimbus clouds.

Further aloft at about six miles, the cloud tops are carried outwards to give thick layer clouds due to the outward-spiralling winds leaving the tropical cyclone core. At the centre of the tropical cyclone, air is subsiding, which makes it dry and often cloud free, and there is little or no wind at the surface. This is called the eye of the storm. 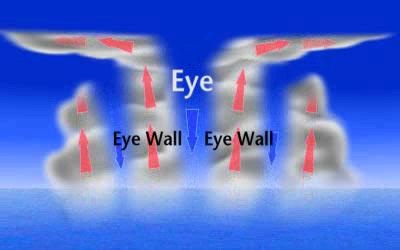 How does the tropical cyclone obtain its energy?

Great amounts of energy are transferred when warm water is evaporated from tropical seas. This energy is stored within the water vapour contained in moist air. As this air ascends, 90% of the stored energy is released by condensation, giving rise to the towering cumulus clouds and rain. The release of heat energy warms the air locally, causing a further decrease in pressure aloft. Consequently, air rises faster to fill this area of low pressure, and more warm, moist air is drawn off the sea, feeding further energy to the system. Thus, a self-sustaining heat engine is created.

As little as 3% of the heat energy may be converted into mechanical energy of the circulating winds. This relatively small amount of mechanical energy equates to a power supply of 1.5x1012 Watts - equivalent to about half the world-wide electrical generating capacity!

How do tropical cyclones get their names?

Tropical cyclones are named to provide ease of communication between forecasters and the general public, regarding forecasts, watches and warnings. Since the storms can often last a week or even longer, and more than one can be occurring in the same region at the same time, names can reduce the confusion about what storm is being described.

Names were first used widely in World War II and were subsequently adopted by all regions. In most regions pre-determined alphabetic lists of alternating male and female names are used. However, in the western North Pacific and North Indian Oceans the majority of names used are not personal names. While there are a few male and female names, most are names of flowers, animals, birds, trees, foods or descriptive adjectives. The names are also not allocated in alphabetical order, but are arranged by the name of the Asian country which contributed the name.

Where and when do tropical cyclones occur? 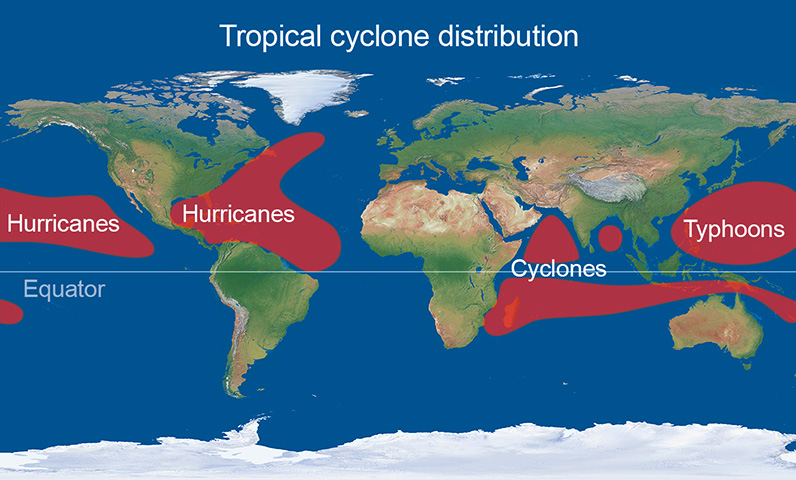 Tropical cyclones which occur in the Atlantic region and affect the Caribbean and USA usually comprise less than 15% of global tropical cyclone activity. Tropical cyclones also occur in various parts of the Pacific Ocean, and can affect coastal regions of Mexico, south-east Asia, north-east Australia and the south Pacific islands. Those that form in the Indian Ocean can affect India, Bangladesh, north-west Australia, some parts of east Africa and Indian Ocean islands such as Mauritius and Madagascar.

How are tropical cyclones ranked?

Although developed in the USA, the Saffir-Simpson Hurricane Wind Scale is used to rank tropical cyclone wind strength in many parts of the world.

Other phenomena which can be just as damaging than the wind frequently accompany tropical cyclones:

Due to advances in numerical weather prediction computer models, forecasting the initial development of tropical cyclones has improved greatly in recent years.

There are certain areas over the oceans that are particularly favourable for tropical cyclone development, but it is usually certain characteristics in a cluster of thunderclouds that leads forecasters to recognise them as tropical depressions. This is done by people at specialist tropical cyclone forecasting centres around the globe such as the National Hurricane Center in Miami, Florida who are constantly studying satellite images, instruments and other weather data to detect and track them through their life-cycle. Once detected, their track is forecast using a combination of numerical forecasting models, synoptic forecasting and statistical methods, which have been developed from the study of the behaviour of past storms.

Observations from ships at sea are always very useful, although, once the existence of a storm and its forecast track have been broadcast, ships tend to move out of their way! Reinforced aircraft, fitted with instruments, fly through and over tropical cyclones, and weather radar can locate storms within 200 miles of the radar station. In addition, tropical cyclones are tracked by satellites, which provide very useful information both to forecasters and numerical forecast models.

"Official" responsibility for forecasting tropical cyclones in the areas affected lies with the regional centres such as the National Hurricane Center in Miami. However, the Met Office does produce tropical cyclone forecasts from its global model, which are disseminated to the regional centres. They then use these forecasts, along with other forms of guidance, to produce their forecasts. Met Office forecasts of tropical cyclones show considerable skill and are among the best models available to agencies such as the National Hurricane Center.

Once a tropical depression has been identified, a series of forecast advisories, which detail the expected track and likely strength of the tropical cyclone, are broadcast. When there are definite indications that a tropical cyclone is approaching land, watches and warnings along coastal regions are raised, which aim to give information to the local authorities of places likely to be in the tropical cyclone's path, so that they can make preparations to protect public safety.

Specially designed shelters in which people can ride out the worst of the weather may have been built in advance. Coastal regions immediately in a tropical cyclone's path are particularly dangerous and people are usually advised to move away from these. In the USA, this can involve the mass evacuation of a million or more people. Warnings are broadcast on TV and radio. NOAA Weather radio is available on a variety of frequencies and gives up-to-date information and advice. There is also a lot of information on a variety of web sites, the most authoritative being those maintained by NOAA and the National Hurricane Center.

Do tropical cyclones occur in the United Kingdom?

Hurricanes are tropical features and require sea temperatures much higher than those around the UK, even in the summer. Hence, hurricanes cannot form at our latitudes. However, we are sometimes affected by deep depressions that were originally tropical cyclones which have moved to higher latitudes, such as ex-Hurricane Ophelia in 2017. Intense mid-latitude depressions can produce near surface winds of hurricane strength, even those which do not originate from a tropical cyclone.

The most widely publicised such depression occurred on 16 October 1987, known as The Great Storm. Some wind gusts were over 100 m.p.h., but these were not the strongest near surface winds ever recorded over the British Isles. On 13 February 1989 a deep depression passed just to the north of Scotland producing a gust of 142 m.p.h. at Fraserburgh. The reason that The Great Storm of October 1987 gained such publicity was that it occurred in a densely populated area causing loss of life and enormous damage to trees.

A number of leading tropical cyclone scientists have come together to issue a statement endorsed by the World Meteorological Organization and publish latest research on the status of understanding and research into tropical cyclones and climate change.

More from NOAA's FAQ on tropical cyclones and climate change