Scientific research from the Climate Science for Service Partnership (CSSP) China project is being used to help communities make better decisions for farming, to ensure sustainable agriculture and to stay safe and thrive.

What is food security?

Food security is when a population has reliable access to sufficient, safe and nutritious food at all times. China grows 30% of the world’s maize, and 30% of this is grown in the Northeast Farming Region. Unexpected decreases in maize yield here will not only cause economic losses, but could also negatively impact prices, trade, and national and global food security.

The agricultural system is especially at risk from the effects of climate change. Since maize relies predominantly on rainfall to grow, this makes maize production susceptible to climate hazards, such as drought. 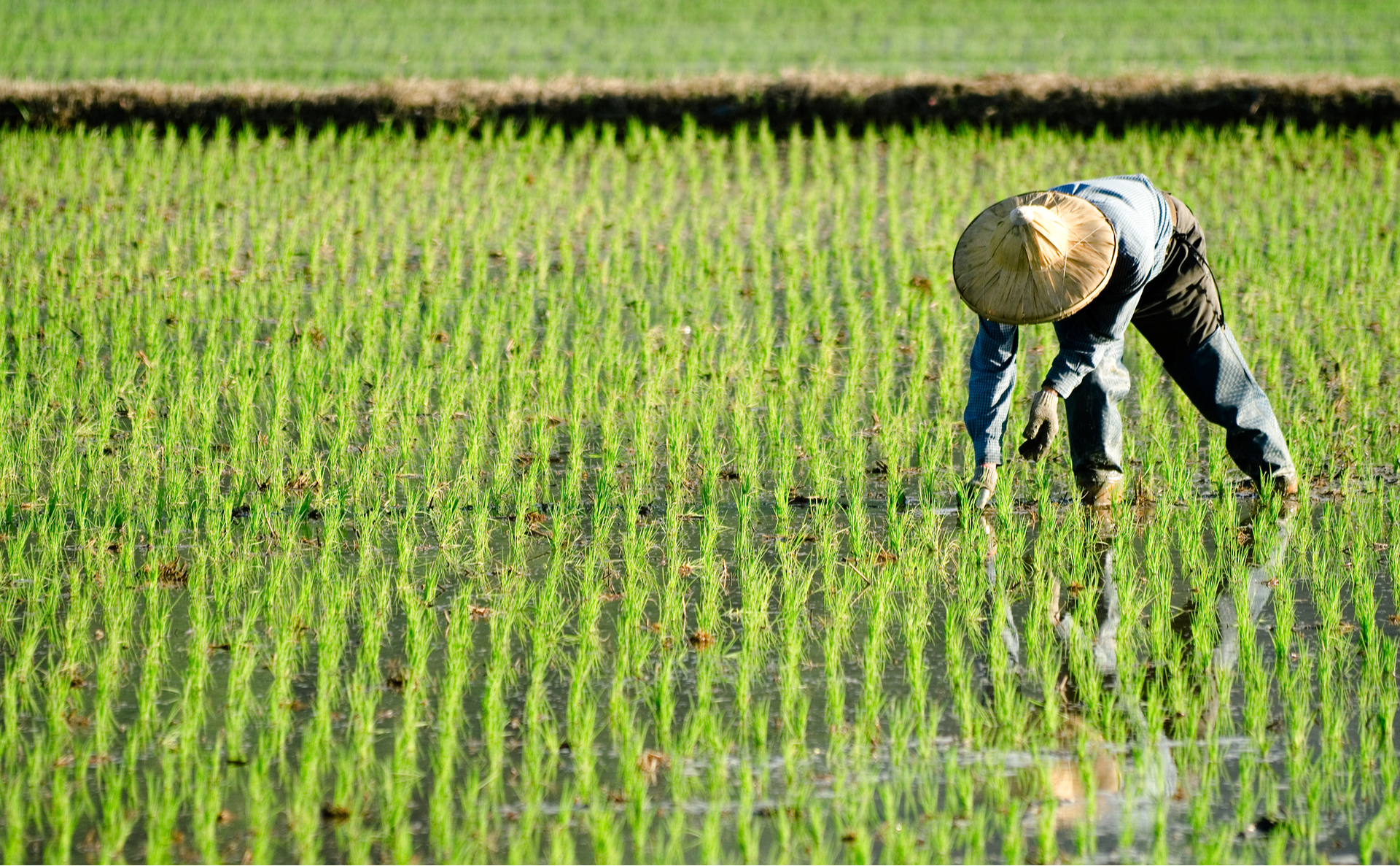 How can research benefit agriculture?

Scientists can use observations and climate models to understand the potential impacts of drought and water stress on food security, both in the present day and in the future. Methods and knowledge developed through CSSP China can be used in global studies of food security.

Extreme weather events are rare, meaning we have limited observations of them. This makes it difficult to understand the current risks from these events. To overcome this, a new research method has been developed which uses the Met Office supercomputer to generate thousands of possible weather scenarios to create a large body of virtual observations. This allows us to simulate extreme weather events that could feasibly occur in the present day but have not yet been observed.

Known as UNSEEN (UNprecedented Simulation of Extremes with ENsembles), this method means we can estimate the risk of extreme weather events in the current climate. The work has shown that the chance of the maize crop in China and the United States failing simultaneously because of extreme heat and dry conditions is higher than previously thought. The UNSEEN method was developed as part of CSSP China and has since been used to simulate high-impact events across the world. 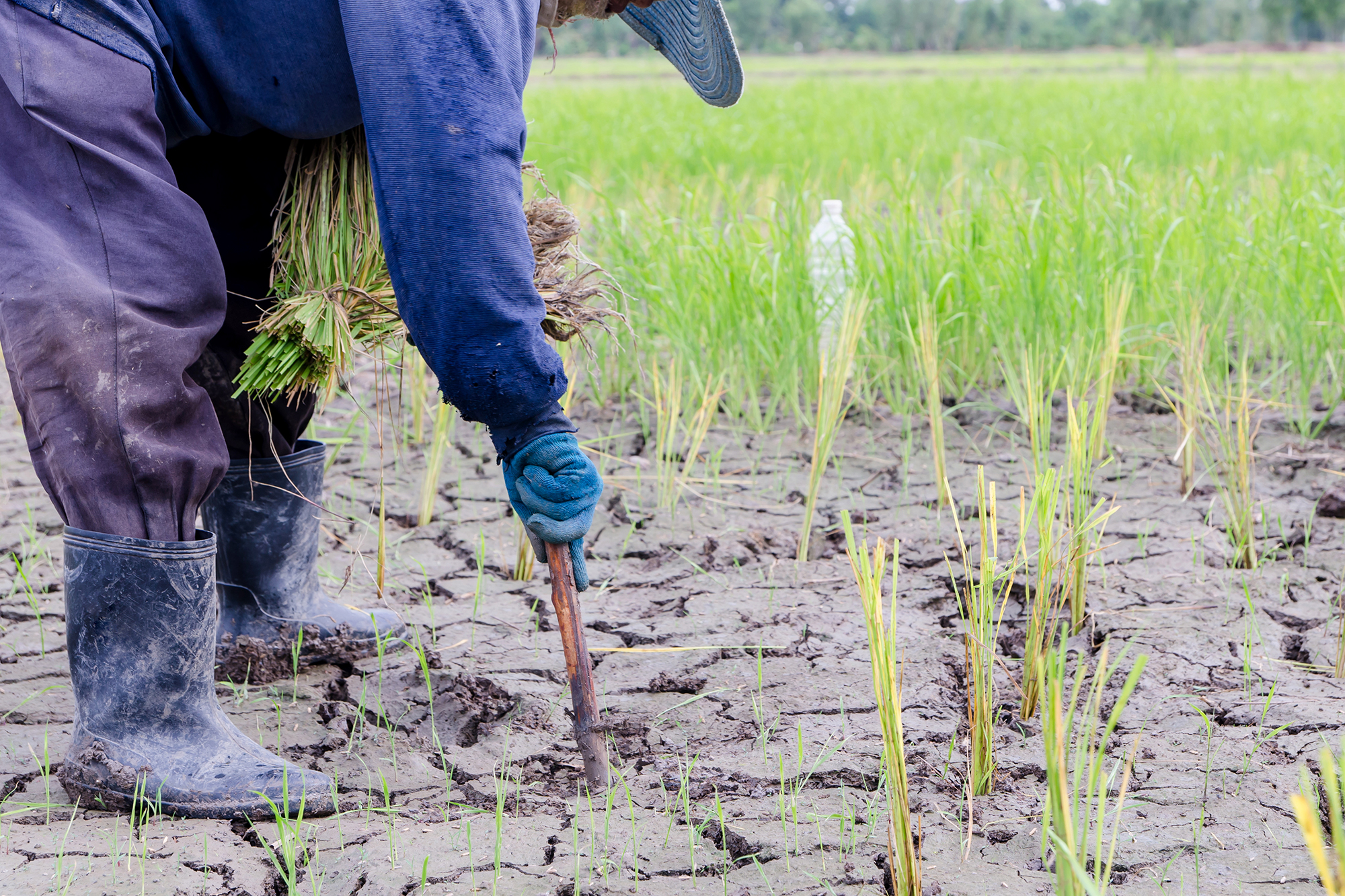 In CSSP China, scientists are studying the current drought risk to maize yield in the Northeast Farming Region. Using the UNSEEN method, they have shown that each year there is a 5% chance of there being a more severe drought in this region than any seen in the last few decades. Farmers and local governments can make plans for this drought risk by using more efficient irrigation technologies or planting drought resistant crop varieties.

CSSP China scientists are also investigating future drought risk to maize-yield in the Northeast Farming Region, in particular the spatial patterns of drought. They have found that droughts which cover less than 60% of the total maize-growing area more likely to occur in small clusters and are therefore have less impactful overall. However, droughts which cover more than 60% of the total maize-growing area tend to form a single connected cluster. Future climate conditions will make it more likely for larger area connecting droughts to occur, with severe impacts on food security. Knowing that droughts may increase in area would allow planners to develop a more regional, coordinated response to these large-scale events. 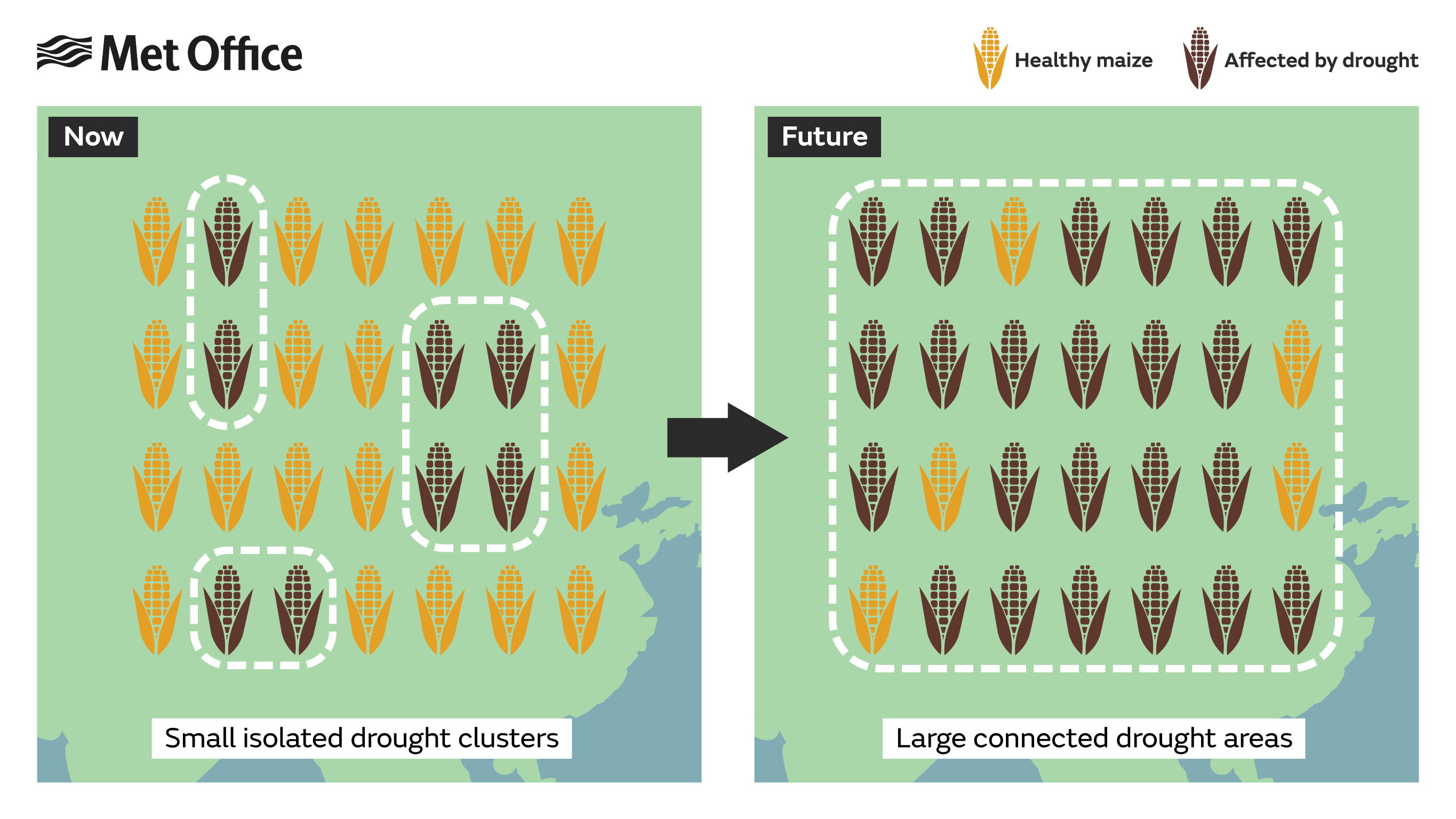 Investigating the drought risk to maize yield is just one strand of food security research in CSSP China. Scientists in the UK and China are working together using a variety of methods to investigate how climate change affects croplands across China. Areas of research include:

Observations and climate models are used to understand how crop yields are affected by changes in temperature and rainfall. Research has found that changes in the strength of the jet stream, a core of strong winds above the Earth’s surface, affects growing conditions for maize across North and Northeast China. Ongoing work is using this knowledge, alongside new and emerging methods including machine-learning, to develop a seasonal maize forecast which could help implement strategies for maximising crop yield. 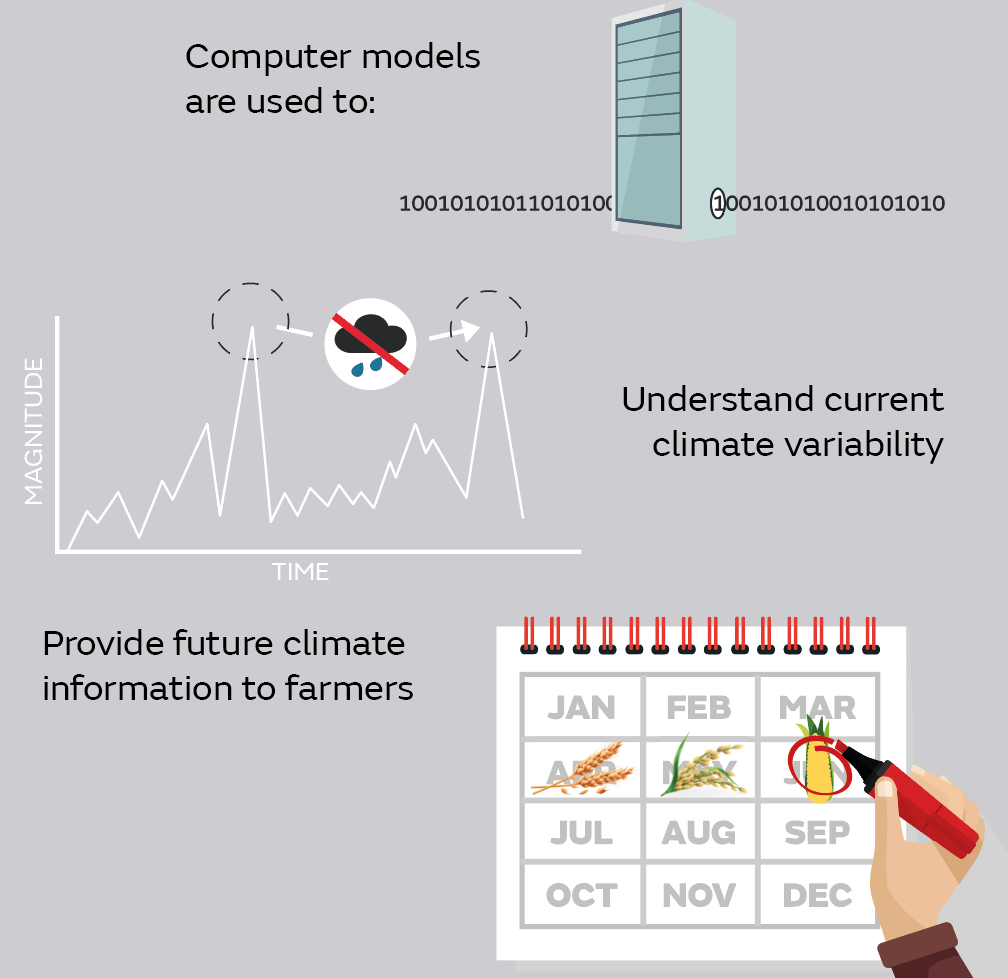 An infographic highlighting how computer models can be used to provide farmers with future climate information.

The province of Yunnan, Southwest China, is one of the biggest producers of tea in China. Scientists at the Met Office and at Yunnan University have been talking to tea experts and local farmers in Yunnan to understand what seasonal and climate information they need to inform their business decisions.

As tea plant cultivation and harvesting are very sensitive to extreme climate events, scientists have been studying how different rainfall indices impact tea growth, quality and price. A collaborative CSSP China paper, led by Yunnan University, found that an increase in consecutive dry days and rainfall during summer and autumn is particularly detrimental to annual tea production, yield and raw price.

Scientists are using the findings from the study to investigate whether there is seasonal forecast skill in predicting these metrics in tea-growing areas. This information may enable tea growers to plan for the coming months as well as adapt to future climate scenarios. 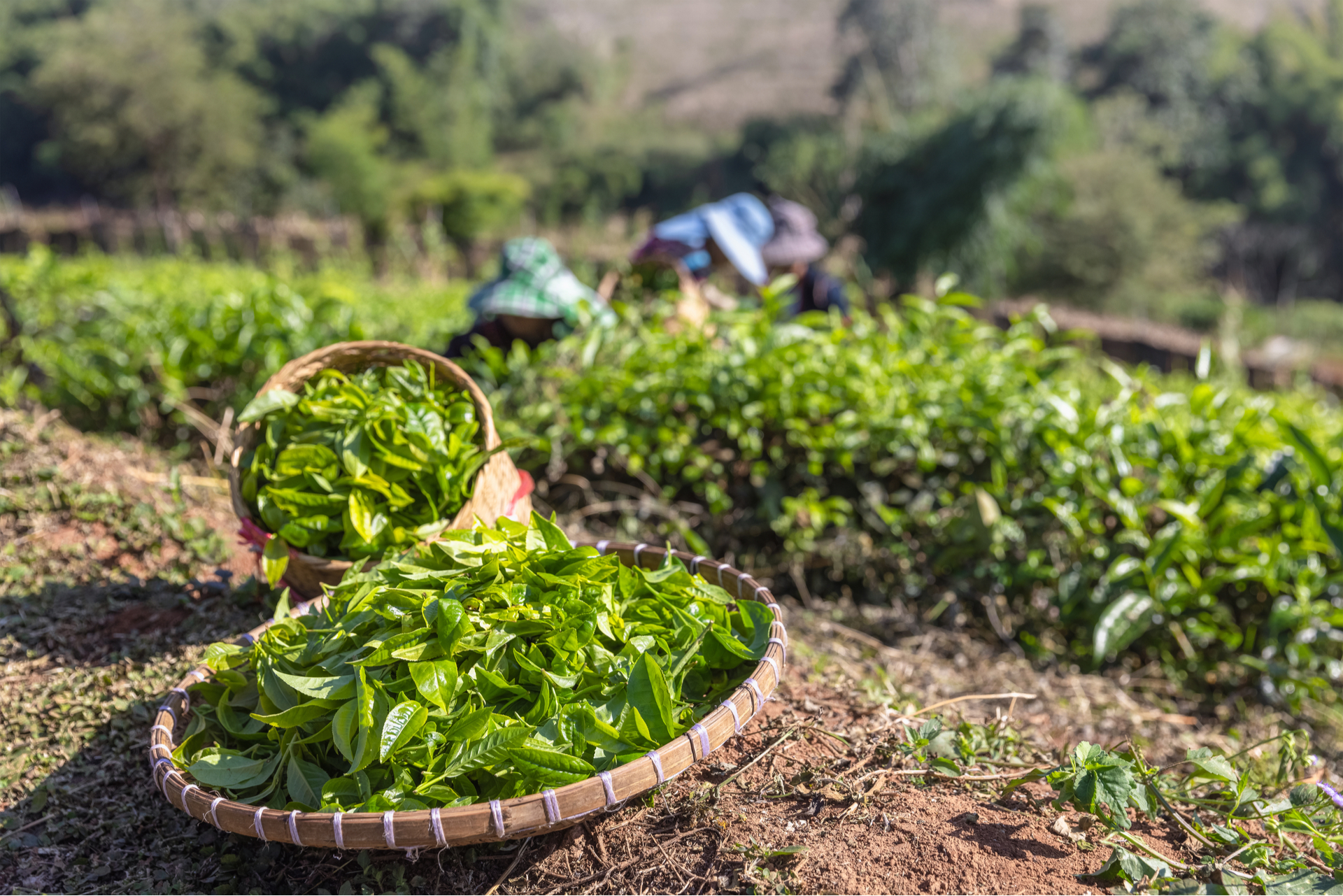 Researchers from the University of Leicester and the UK Centre for Ecology and Hydrology are using satellite data to monitor and identify dry and stressful conditions for crops in several regions in China. The project has also produced models of crop growth for winter wheat and grasses over China. The outputs have potential to be used to produce a near-real time diagnosis of crop conditions, which could feed into an early warning system for emerging drought and provide information on the likely crop yield. Methods applied and data produced in this project have potential to be replicated globally by researchers.

Without effective adaptation, climate change in the Northeast Farming Region could lead to a reduction in maize yield and impacts on food security. The following infographic, information pack and briefing note were developed to help explain food security research in CSSP China and how it can benefit those working in agriculture. The materials have varying levels of technical content for use by different audiences, from farmers and industry workers, to policymakers.

Scientists in the UK and China are working closely with stakeholders in agriculture to co-produce climate services for food security. Climate services provide climate information that is useful and usable to support decision-making. It is important for climate services to be driven by user needs so that they are focussed and relevant. Scientists are therefore speaking to researchers and farmers in China’s agriculture sector to understand what information is important to help their businesses. Knowledge gained from these conversations will help tailor science research and outputs to meet these information requirements.

As part of this process, the project created a comic strip and video to explain the concept of ‘co-production’ to the farming community in China:

Find out more about how the Met Office supports the SDGs.