July 2019 - Research published this month presents a new set of objectively derived daily weather patterns for India and their relationship with rainfall variability.

This research, led by the Met Office and involving scientists from the Indian National Centre for Medium Range Weather Forecasting (NCMRWF) and the Department of Geography at King's College London, presents a new set of daily weather patterns representative of rainfall variability within different phases of the Indian climate.

Large-scale weather regimes over India follow a relatively predictable evolution throughout the course of the year, driven predominantly by the onset and retreat of the Asian summer monsoon. This new research investigates circulation variability within each of these large-scale weather regimes, with the aim of identifying the sub-weekly weather patterns responsible for the within-regime rainfall variability.

A set of 30 weather patterns were generated in total, by clustering daily wind fields over a 38 year period from reanalysis data. The resulting weather patterns exhibit strong seasonality, with each weather pattern typically occurring for between 3 and 6 months of the year, with near zero occurrences for the other 6 to 9 months. Some weather patterns also have breaks in their months of occurrence, whereby they occur during monsoon onset and withdrawal but not during summer or winter. 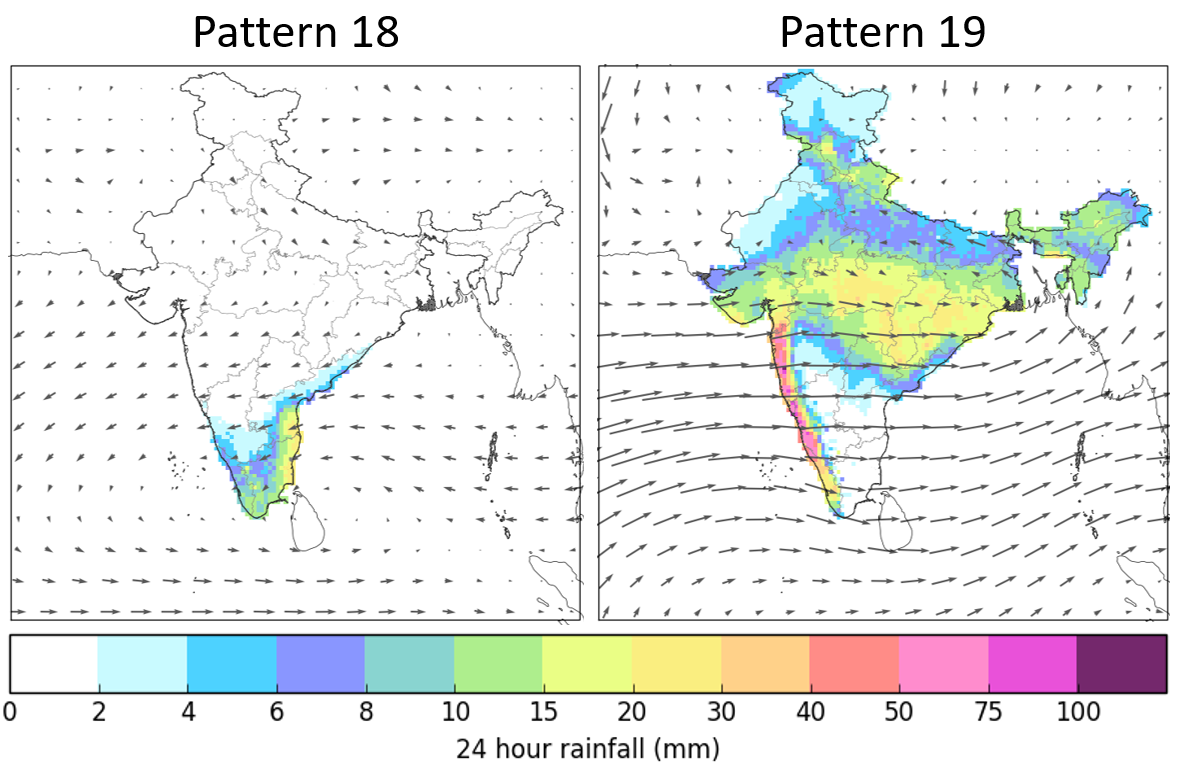 Weather pattern 18 (shown above) is most likely to occur between October and December and is one of seven weather patterns classified as being within the retreating monsoon regime. This particular weather pattern has a north-easterly flow over much of India with wind flowing off the Bay of Bengal in southern India, leading to heavy rainfall in the south east.

A contrasting weather pattern is weather pattern 19 (also shown above) which is most likely to occur between June and August and is one of four weather patterns classified as being within the active monsoon regime. This particular weather pattern has a strong westerly flow off the Arabian Sea leading to intense rainfall along the west coast and inland across central and northern parts of India.

Identifying weather pattern variants within the regime categories is important for establishing the specific circulation types behind the largest rainfall totals and resulting hazards such as flooding or landslides (e.g. identifying the most flood prone periods within the active monsoon regime).

These weather patterns may also be useful for relating to non-meteorological data such as from the agriculture, transport or energy sectors, to help understand how large-scale atmospheric circulation affects specific industries.

Once weather pattern characteristics are understood, in terms of their meteorological climatologies or sector-specific impacts, it then becomes easier to interpret forecast output and describe likely consequences. Creation of a forecasting product would also enable objective analysis into the predictability of different weather patterns or regime groupings over India.