By late November there had been relatively little snowfall over the Alps. This situation changed substantially in the first week of December as very heavy snow developed across the mountain range. This is shown nicely in these false-colour images from the VIIRS instrument aboard the NOAA/NASA satellites, Suomi-NPP and NOAA-20. The two images were made from data collected four days apart as the satellite passed over the Alps on 30th November (left image) and 3rd December (right image).  This type of false-colour image highlights where snow is lying on the ground. They are created using five channels in the near-infra-red part of the spectrum so things look a little different to what the human eye would see. Snow can be easily differentiated from the white cloud as it now appears in a bright orange colour. In both images low cloud and fog can be seen across north-east Italy, parts of the Swiss plateau to the north of Alps, and within some of the valleys within the Alps themselves. 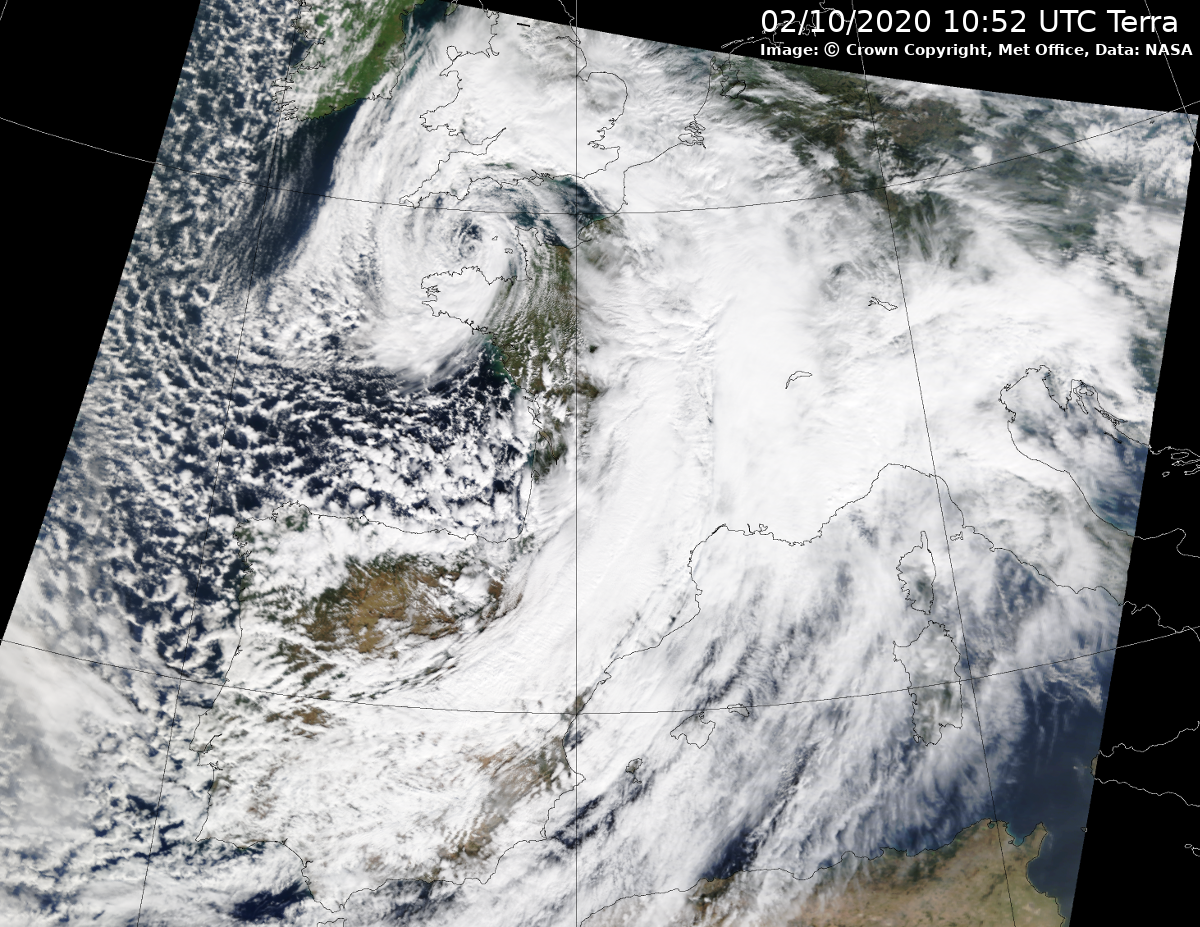 In early October a low-pressure system over the Atlantic underwent explosive cyclogenesis as it approached the coast of Brittany, becoming the first named European windstorm of the season, Storm Alex. Many countries in Western Europe, including the UK, saw high winds and heavy rainfall. As the storm passed over the continent it drew warm Mediterranean air northwards which was forced to rise over the orography of the Alps. This led to large, relatively stationary thunderstorms over parts of south-east France and north-west Italy which caused severe impacts including flooding and landslides. This 'true-colour RGB' image from NASA’s Terra satellite shows the cyclonic system over Europe on the 2nd October when the storm was near peak intensity. 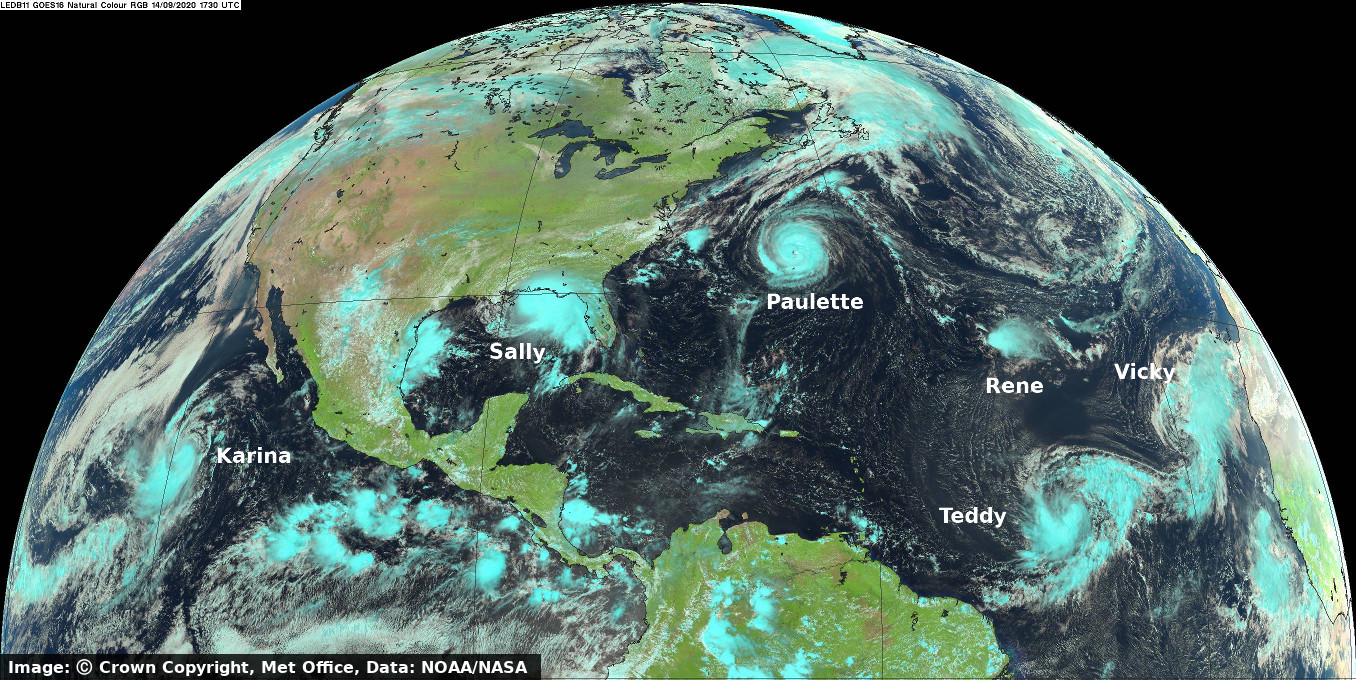 2020 has seen an especially active Atlantic Hurricane season. At the time of writing in early October the pre-determined list of 21 names for Atlantic storms has already been exhausted and Greek characters are now being used. This has only happened once before in the very active 2005 hurricane season. On this day in September five named storms were present simultaneously over the Atlantic Basin, the first time this has happened since 1971. The image shows there was also a sixth named storm over the eastern Pacific. The image is created from visible and near Infra-red channels of the Advance Baseline Imager (ABI) instrument on GOES-East, a geostationary satellite operated by NOAA/NASA. The combination of channels provides a view near to what the human eye would see, except ice clouds show up as a cyan colour. This is useful characteristic as it allows forecasters to distinguish between ice and water clouds. 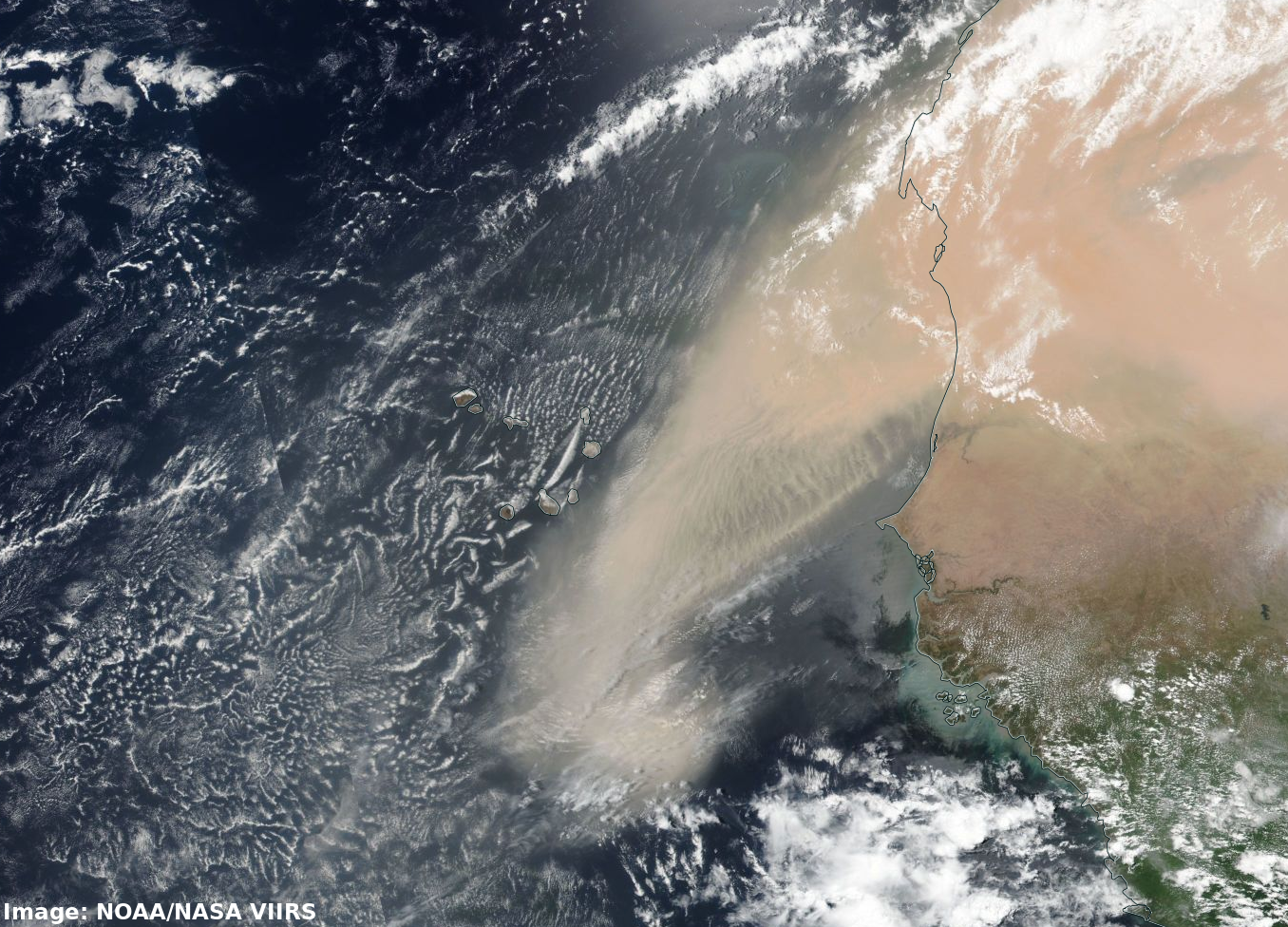 This true colour image from the NOAA/NASA Suomi-NPP satellite shows two striking phenomenon: the large amount of airborne dust that has been lifted from the Sahara desert and swept over the Atlantic, and swirling cloud patterns in the wake of the Cape Verde islands created as vortices form in the lee of the islands in the north-easterly airflow.

The dust has been lifted by a number of large storms over West Africa. This is evident in the second image, known as a Dust RGB. This is a satellite product that allows us to detect airborne dust. The dust shows up in bright pink/magenta colours and is present over large areas of West Africa and over the ocean. The cold clouds at the top of the storms show up as red and orange colours. This image was produced at the Met Office using data from EUMETSAT's Meteosat-11 satellite in geostationary orbit. Both images are from 14:15 UTC on 7th June. 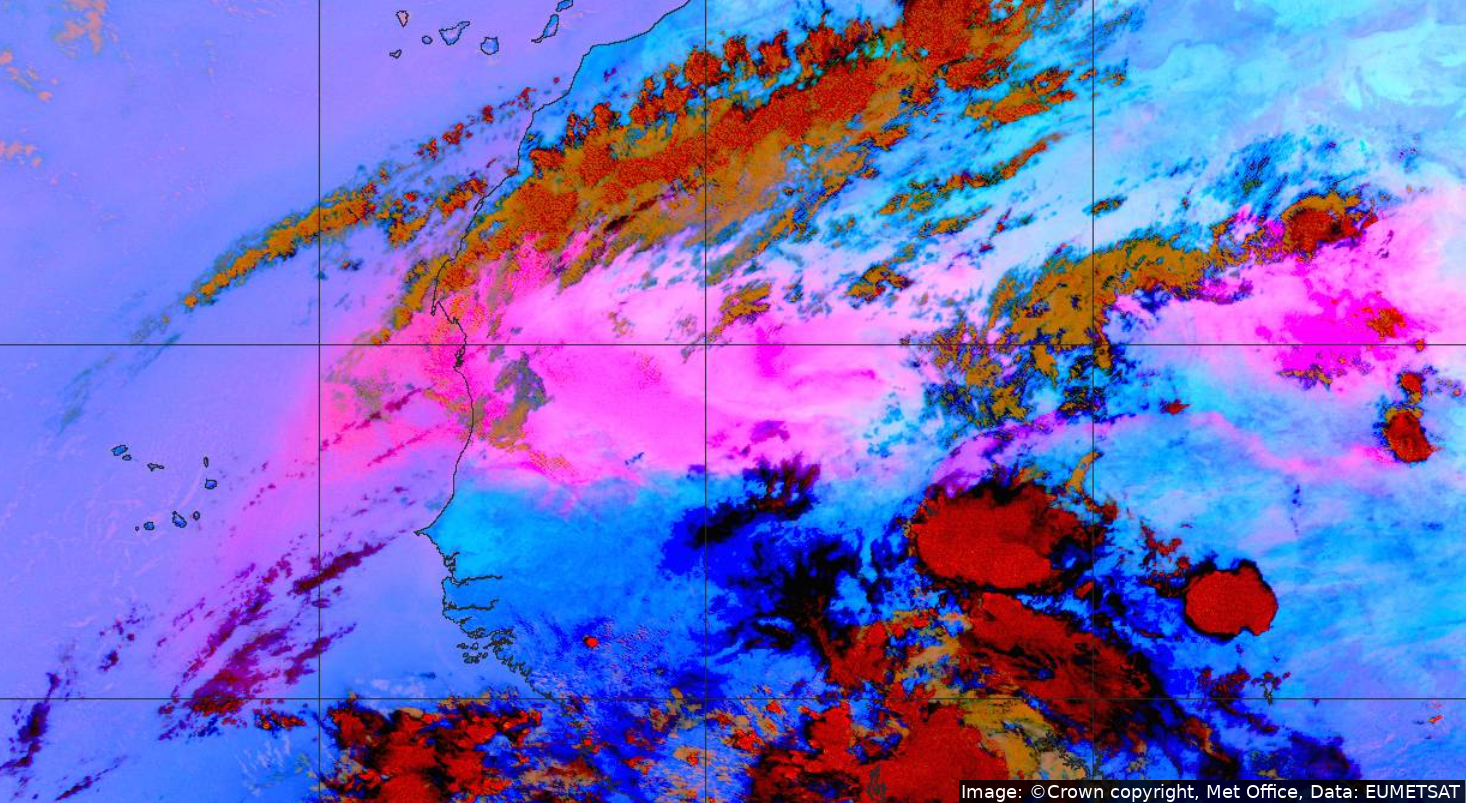 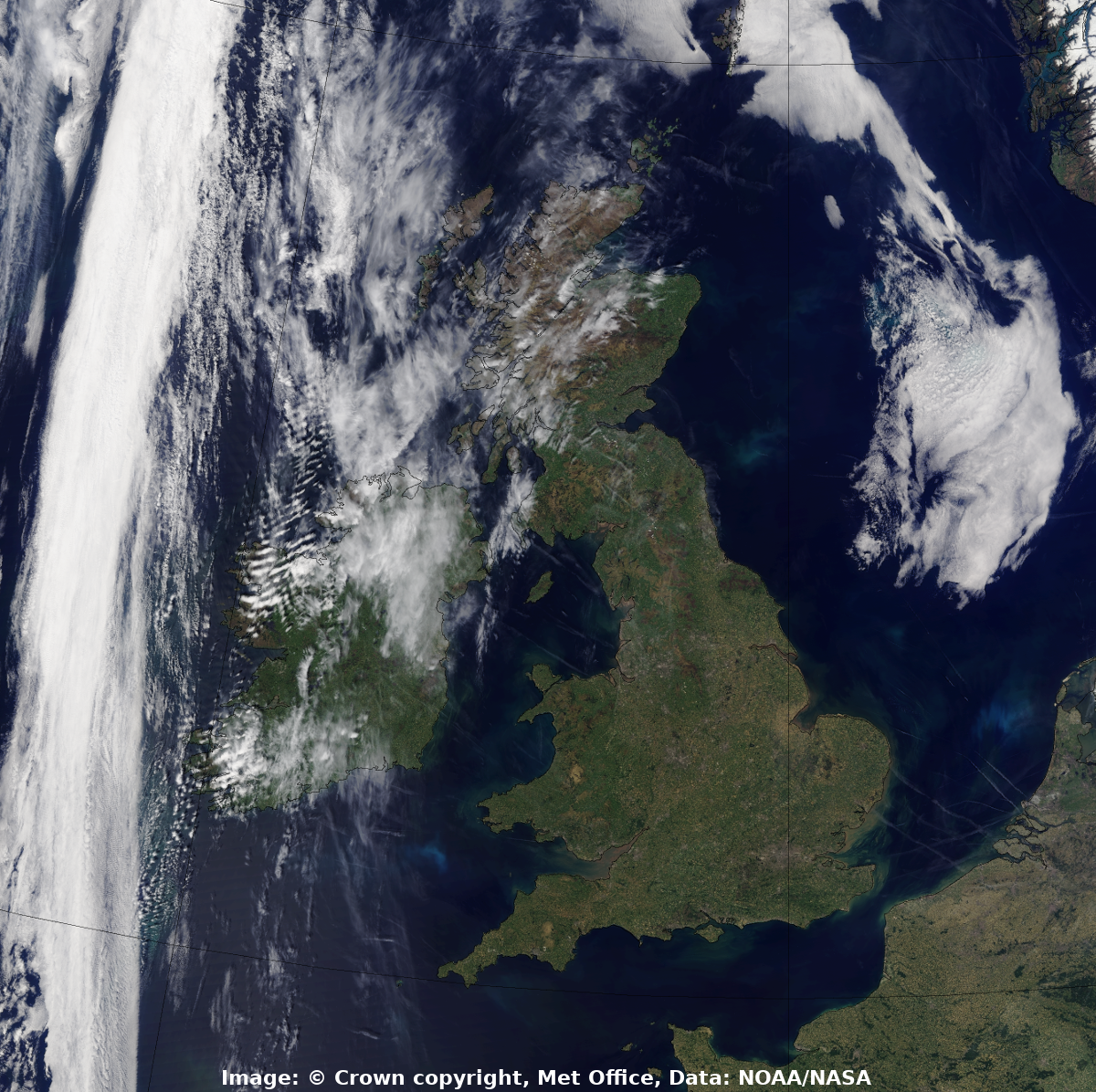 May 2020 was the sunniest UK calendar month since records began. It comes at the end of the sunniest Spring ever recorded in the UK.

This true colour image shows a largely cloud-free day over the UK on 28th May. The image is created from data collected by NOAA-20, a polar-orbiting satellite operated by NOAA/NASA. There are some interesting features to spot in the image including wave clouds over Ireland, a narrow band of frontal cloud to the west of Ireland, many visible aircraft contrails, particularly over the sea and some patches of phytoplankton in the sea.

The Met Office receive data directly from polar-orbiting  weather satellites as they pass overhead. This means that observations from these satellites can be used very soon after they are collected in our forecasting models and to produce imagery. 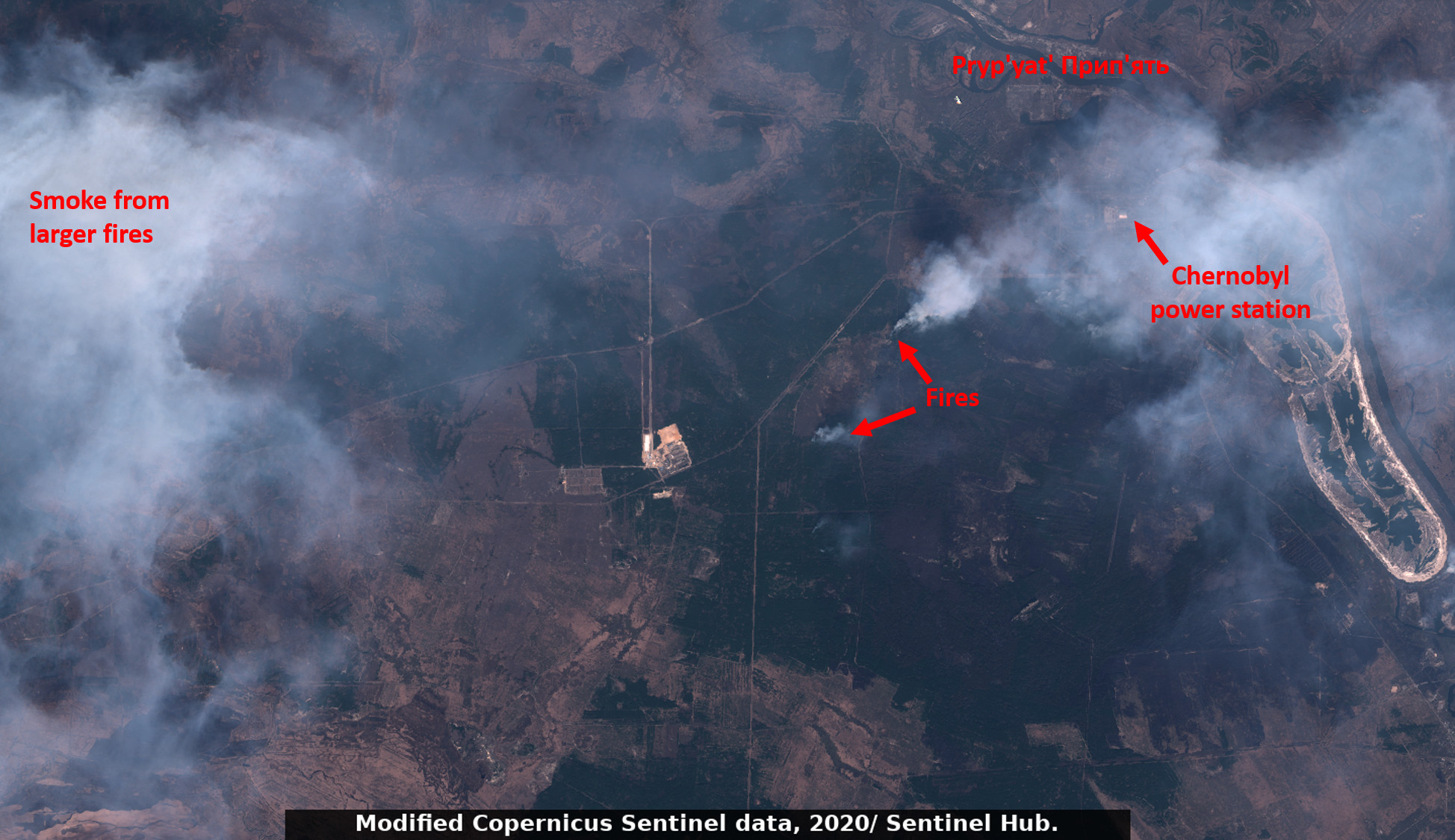 For two weeks in April, large forest wildfires burned in the Chernobyl Exclusion Zone. Firefighters in the region were able to bring the fires under control before they reached the nuclear power plant. Smoke from the fires blanketed the city of Kiev, raising air pollution to high levels.

In this image from ESA’s Sentinel-2 satellite, the fires and smoke can be seen close to the sarcophagus covering the damaged nuclear reactor. In  the end the fires burned 270 square kilometres of land and reportedly were halted just 1.5 km from the power plant. 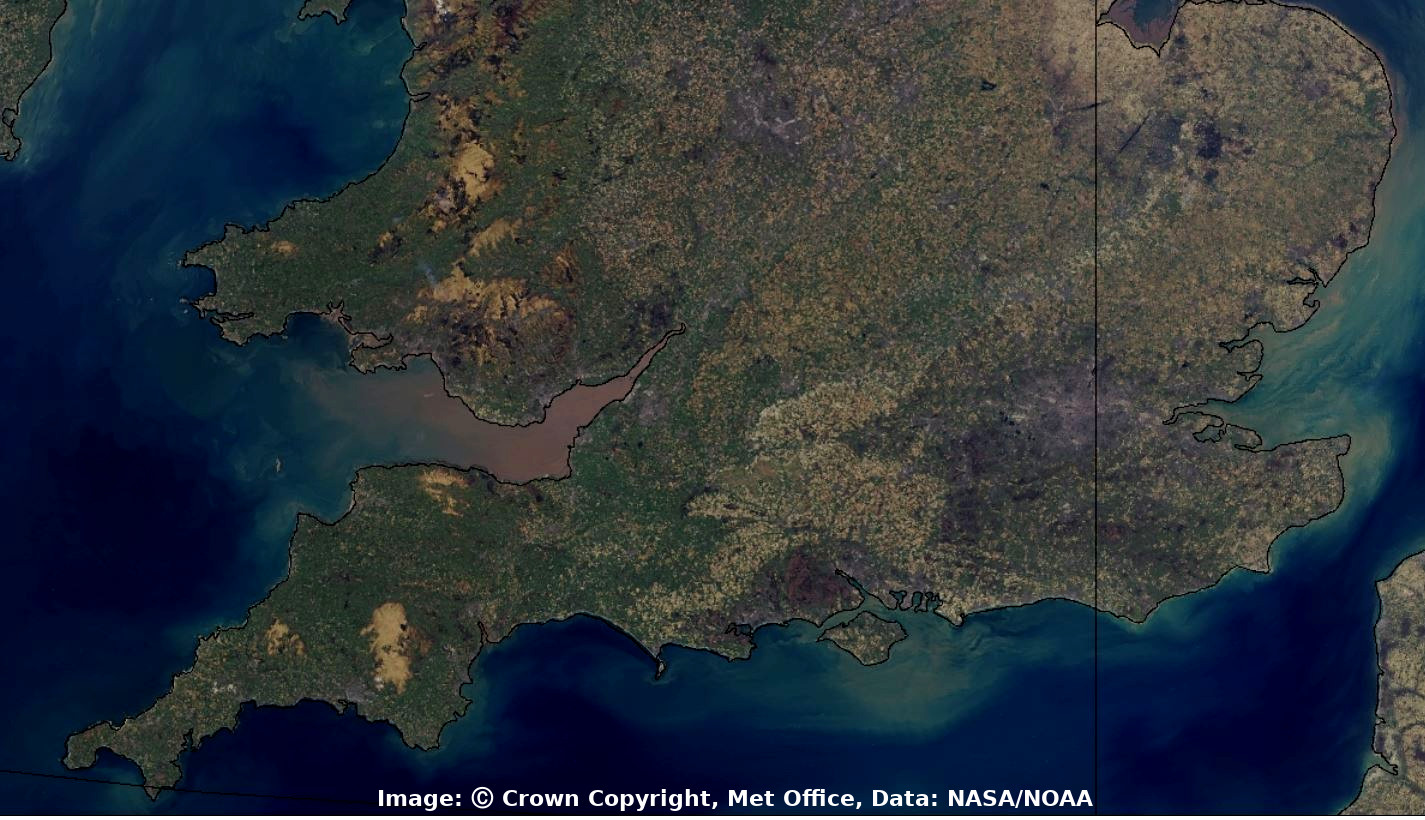 In late March, the UK and much of the World were in lockdown in response to the coronavirus pandemic. High pressure dominated over the UK at this time, bringing dry and settled weather for many parts. This image from 25th March captured by the NASA/NOAA operated NOAA-20 polar-orbiting satellite shows southern parts of the UK with barely a cloud to be seen. It gives an uninterrupted view of the land and sea over this region, allowing the variety of land uses to be seen. Grey colours highlight the urban areas - London and Birmingham are most clearly visible. Upland areas in the West such as Dartmoor, Exmoor, Bodmin moor, the Brecon Beacons and Cambrian Mountains appear as a light yellow/brown, and the southern-most Snowdonia mountains appear as a darker brown at the top of the image. National parks, hills and commons located further east include the New Forest and Surrey hills, and these are characterised as a chocolate brown colour. Forested areas show up as a very dark green, with both the Forest of Dean and Thetford forest covering large areas. Elsewhere there is a patchwork of fields, greener in the west and yellower in the south and east. The brown colour of silt being washed out to sea can be seen in the Bristol channel. Satellite imagery further nothwards starts to contain more cloud, with a thick band of cloud over Scotland. 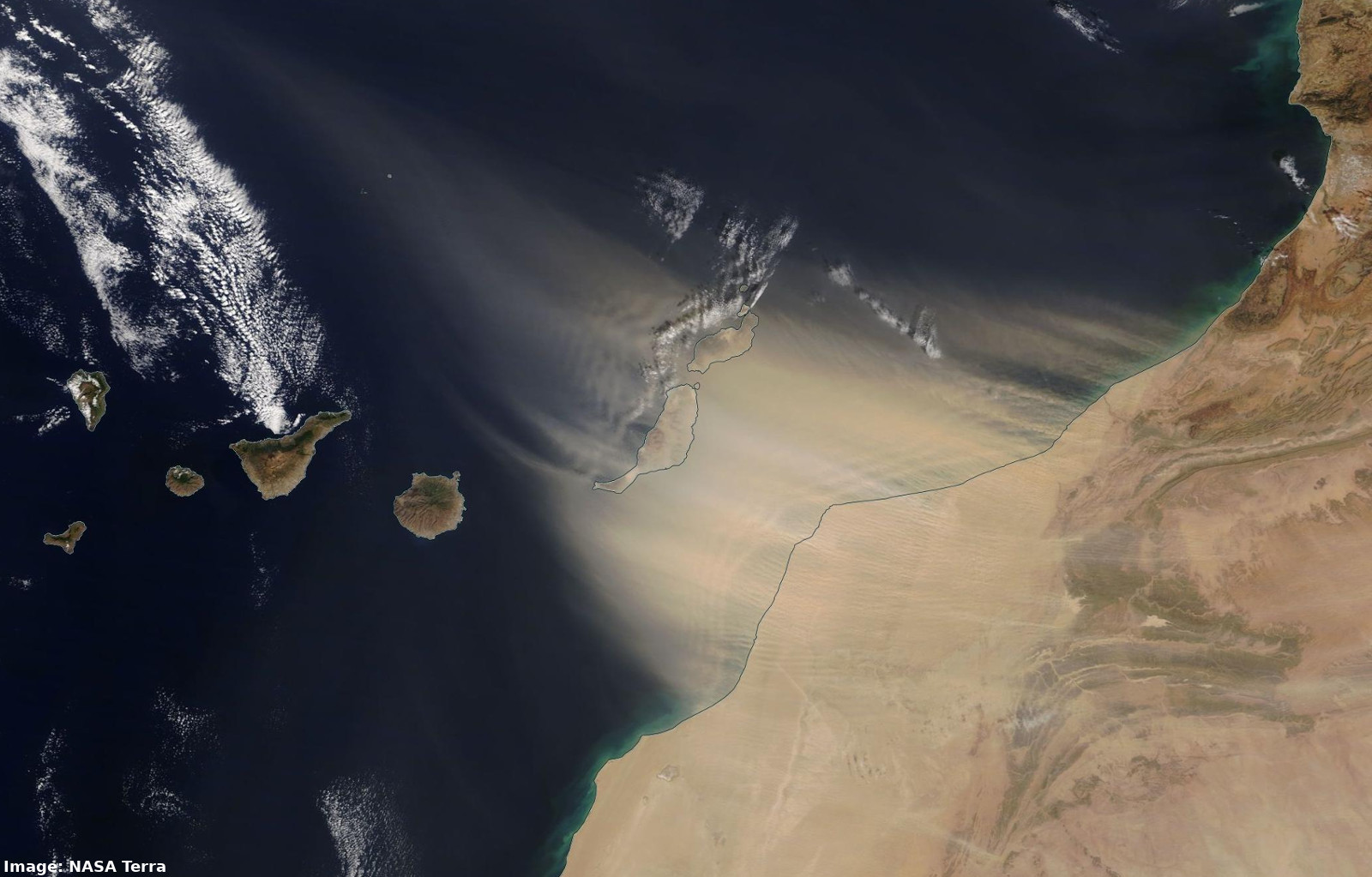 On the 22 and 23rd February strong winds over western Africa lifted dust from the Sahara desert and advected it over the Canary Islands. This image, captured early in the dust event, shows the dust streaming from Africa over Lanzarote and Tenerife. The islands further west were affected later. In a meteorological phenomenon known locally on the Islands as “Calima", dust was carried by gale force winds which severely reduced visibility on the islands. There were extensive impacts including closure of most airports on the islands with hundreds of flights affected. People were advised to stay indoors, events were cancelled and schools did not open until Tuesday. While a Calmia is not uncommon, local sources claimed this event was the worst seen in the last 40 years.

As the dust was low in the atmosphere it interacted with the land-masses of the Canary Islands producing ripples in the wake of the islands which can be seen in this true-colour image from NASA's Terra satellite. Further ripples can be seen in the dust where it passes from the African coastline over the ocean. 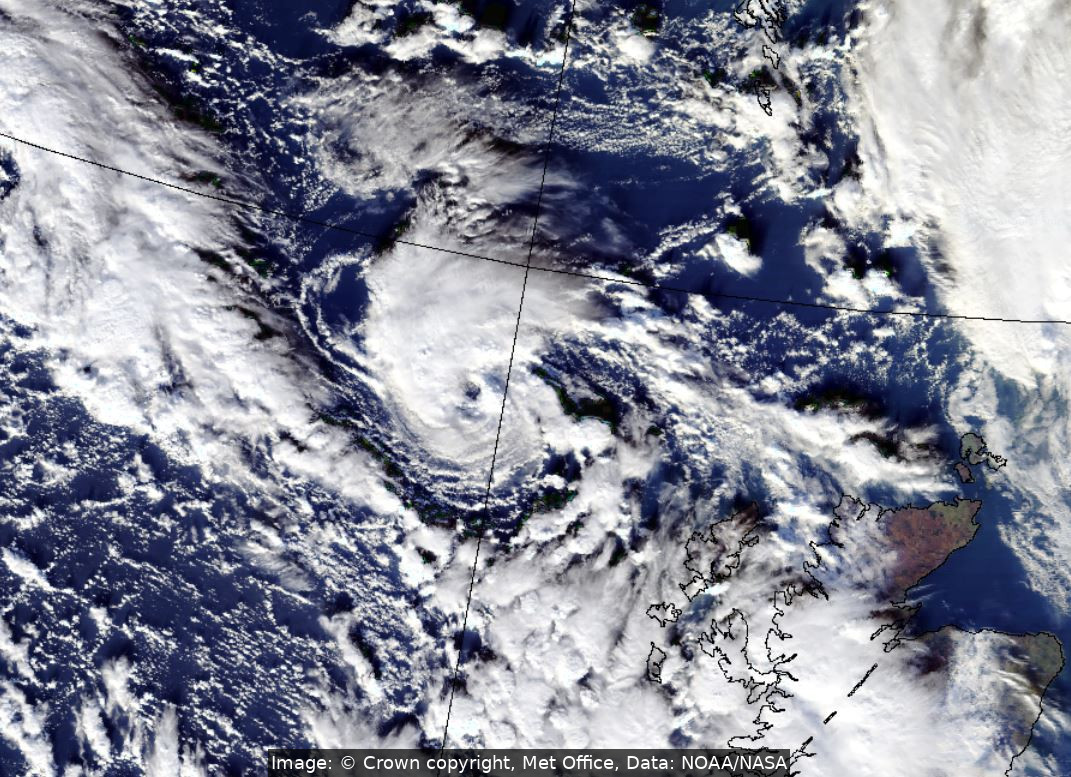 A Polar Low is a small and short-lived weather system associated with severe weather including high winds and snow. They can form when cold polar air moves over the relatively warmer sea, triggering convection. The rising air leads to the development of cumulus and cumulonimbus clouds. In the right conditions these clouds wrap into a tight circulation around a rapidly deepening low pressure centre. Due to their intense winds they can cause problem to mariners, but normally dissipate quickly over land.

On 28th January a Polar Low with a cyclonic spiralling cloud and a marked eye could be seen in satellite imagery over the Atlantic ocean to the north east of Scotland. This true colour image from 13:37 UTC was produced using data from the Visible Infrared Imaging Radiometer Suite (VIIRS) on Suomi/NPP, a NOAA/NASA operated polar orbiting satellite.