Forecast for June to November 2012

The most likely number of tropical storms predicted to occur in the North Atlantic during the June to November period is 10, with a 70% chance that the number will be in the range 7 to 13. This represents slightly below normal activity relative to the 1980-2010 long-term average of 12.

Note: Tropical Storms Alberto and Beryl occurred in May and thus were outside the period covered by this prediction (June-November). 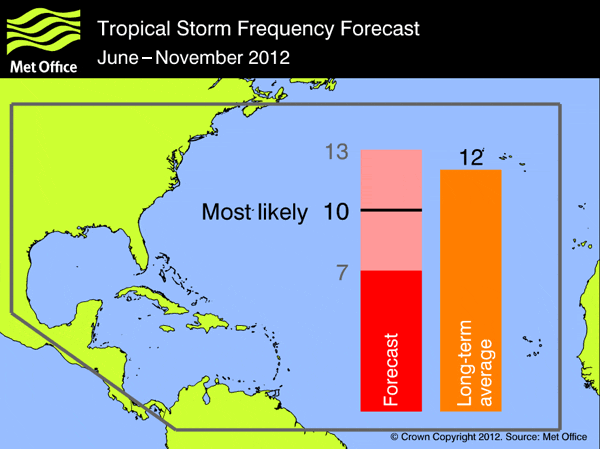 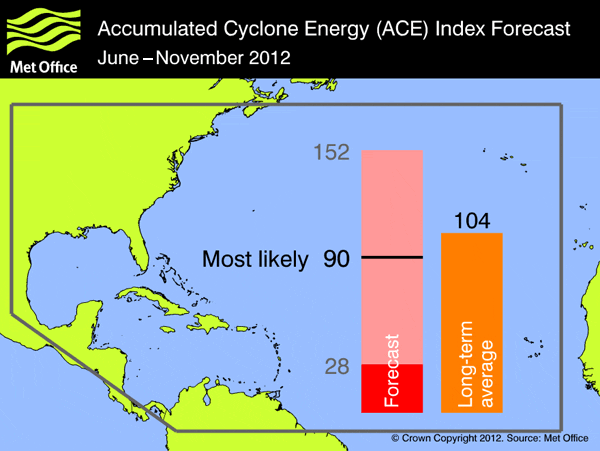 At the start of each North Atlantic season the Met Office forecasts the number of tropical storms and the value of the ACE index. Previously, this was for the period July-November. However, since 2011 the forecast has been issued for the full season (June-November). The forecast has been produced following research collaborations with the European Centre for Medium-Range Weather Forecasts (ECMWF).

The forecast is made using information from two dynamical global seasonal prediction systems; the Met Office Met Office seasonal prediction system: GloSea4 system and ECMWF system 4. Both systems simulate the ocean-atmosphere processes and interactions that determine tropical storm development. Multiple forecasts are made (using ensemble forecasting methods) to allow estimation of the range of likely outcomes. In contrast to the dynamical methods used in this forecast, statistical prediction methods, which have traditionally formed the basis of most published predictions, do not model atmospheric processes. They rely on past relationships between storm numbers and preceding observed conditions (e.g. pre-season SST patterns).

Recent studies have shown that dynamical models have considerable skill predicting the number of tropical storms - for example successfully predicting the change from the exceptionally active season of 2005 to the below-normal activity of the 2006 season. Last year the Met Office forecast was for 13 tropical storms and an ACE index of 151 with a 70% probability range of 10 to 17 storms and an ACE index of 89-212, respectively; in the event, the number of storms was 19 and the ACE index was 124.

The Met Office seasonal tropical storm forecast for the North Atlantic, issued on 24 May 2012, predicted the most likely number of tropical storms to occur during the June to November period would be 10, with a 70% chance that the number would be in the range 7 to 13. This represents slightly below normal activity relative to the 1980-2010 long-term average of 12. An ACE index of 90 was predicted as the most likely value, with a 70% chance that the index would be in the range 28 to 152 - which was slightly below normal relative to the 1980-2010 average of 104.

Download a report on the forecast verification and analysis of the 2012 season for further details. The Met Office will issue its first forecast for the 2013 season in March 2013. A public forecast for the June to November 2013 period will be issued in May 2013.