The Met Office annual global temperature forecast for 2023 suggests that next year will be one of the Earth’s hottest years on record.

The average global temperature for 2023 is forecast to be between 1.08 °C and 1.32°C (with a central estimate of 1.20 °C) above the average for the pre-industrial period (1850-1900): the tenth year in succession that temperatures have reached at least 1°C above pre-industrial levels.

The Met Office’s Dr Nick Dunstone, who has led the 2023 global temperature forecast, said: “The global temperature over the last three years has been influenced by the effect of a prolonged La Niña – where cooler than average sea-surface temperatures occur in the tropical Pacific. La Niña has a temporary cooling effect on global average temperature.”

But Nick Dunstone added: “For next year our climate model is indicating an end to the three consecutive years with La Niña state with a return to relative warmer conditions in parts of the tropical Pacific. This shift is likely to lead to global temperature in 2023 being warmer than 2022.”

2023: another notable year in the series

Prof. Adam Scaife, Head of Long-range Prediction at the Met Office, added: “So far 2016 has been the warmest year in the observational record which began in 1850. 2016 was an El Niño year where the global temperature was boosted by warmer waters in parts of the tropical Pacific. Without a preceding El Niño to boost global temperature, 2023 may not be a record-breaking year, but with the background increase in global greenhouse gas emissions continuing apace it is likely that next year will be another notable year in the series.” 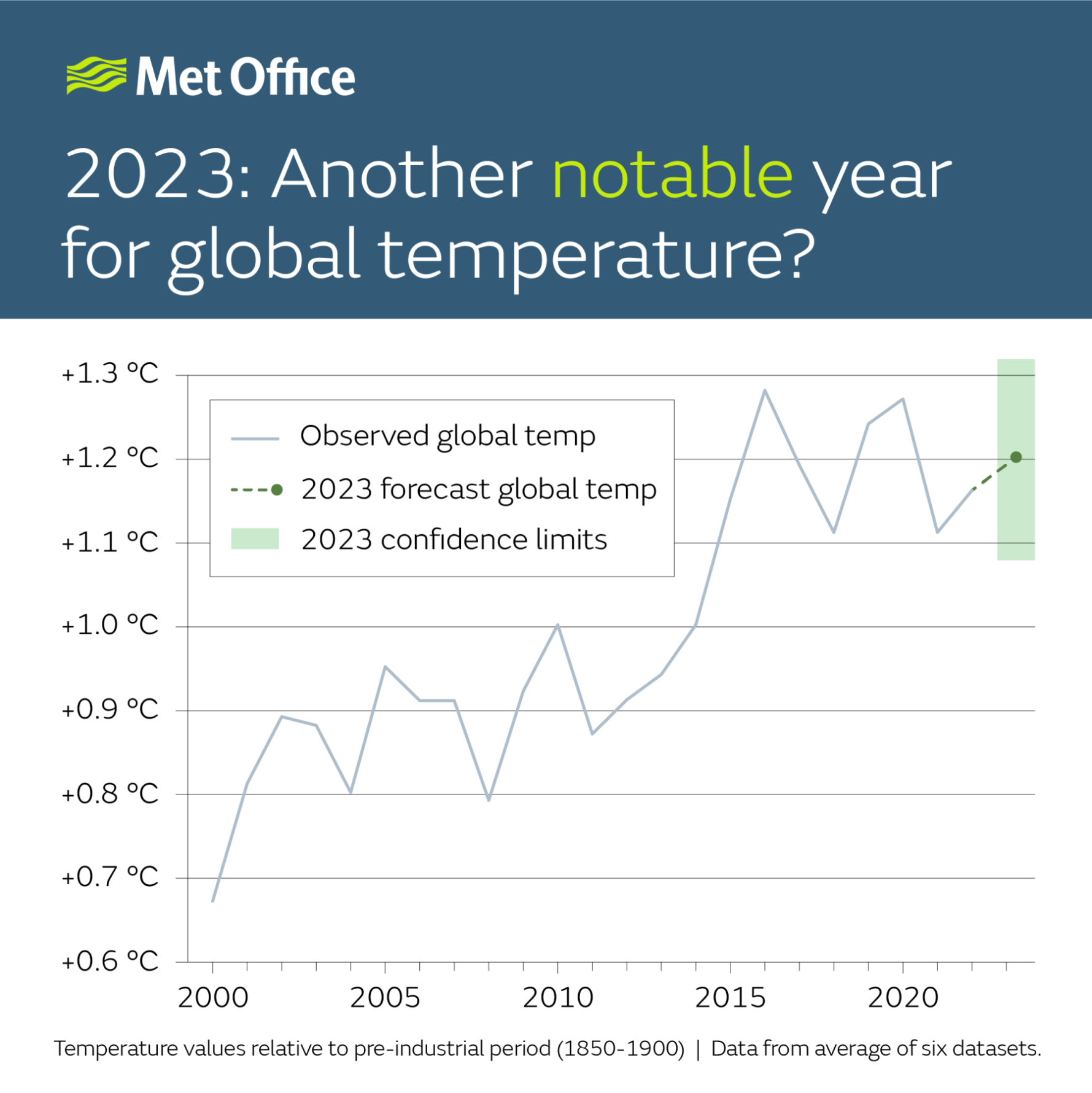 The series of warmest years began in 2014; since then global temperatures exceeded 1.0°C above the pre-industrial period (1850-1900).  The forecast is based on the key drivers of the global climate, but it doesn’t include unpredictable events such as large volcanic eruptions, which would cause a temporary cooling.

Dr Doug Smith, one of our leading experts in climate prediction, added: “The fact that global average temperatures are at or above 1.0°C for a decade masks the considerable temperature variation across the world. Some locations such as the Arctic have warmed by several degrees since pre-industrial times.”

Global temperatures are rising and there is a need to act swiftly to keep global mean temperature below 1.5°C to avoid the worst impacts of climate change.