Forecast of the annual rise in atmospheric carbon dioxide concentration measured at Mauna Loa, Hawaii for 2022

Carbon dioxide will continue to build up in the atmosphere in 2022 due to ongoing emissions from fossil fuel burning, land use change and cement production. This year's annual CO2 rise is predicted to be smaller than most recent years, due to a temporary increase in the removal of carbon from the atmosphere by tropical vegetation in response to weather conditions associated with the current La Niña event. If global warming is to be limited to 1.5°C, the atmospheric CO2 rise will need to be kept to this rate on average over the 2020s through a rapid reduction in global emissions, and subsequently reduce to zero before mid-century. 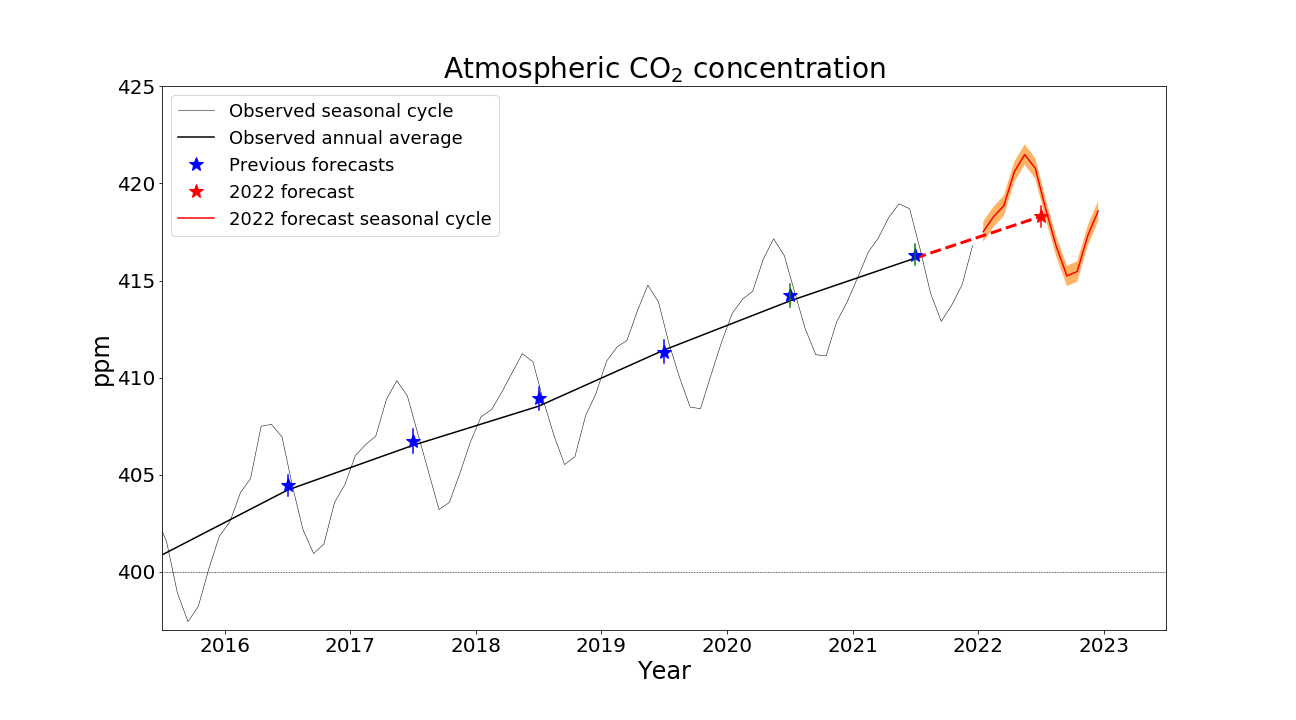 This will continue the rising trend in CO2 seen in the long-term record of measurements from the Mauna Loa observatory in Hawaii that date back to 1958 and are a good guide to global CO2 levels. However, the rise from 2021 to 2022 will be smaller than the average annual rises over recent years (Figure 2). This is despite global emissions having returned to pre-pandemic levels after the temporary drop in 2020. Our forecast method uses total annual global emissions of 10.68 GtC, with annual fossil fuel emissions assumed to be 9.80 GtC, the same as in 2019 prior to the temporary drop in 2020 associated with the global socioeconomic response to the Covid-19 pandemic. We assume that annual land use emissions persist at the same level as 2020, 0.88 GtC, since there is no clear evidence of anything other than persistence for recent years, particularly noting the larger uncertainties in land use emissions compared to those from fossil fuels.  Our prediction of a smaller atmospheric CO2 rise this year is due to natural climate variability being expected to temporarily strengthen natural carbon sinks, causing a temporary slowing of the rate of build-up of CO2 in the atmosphere. 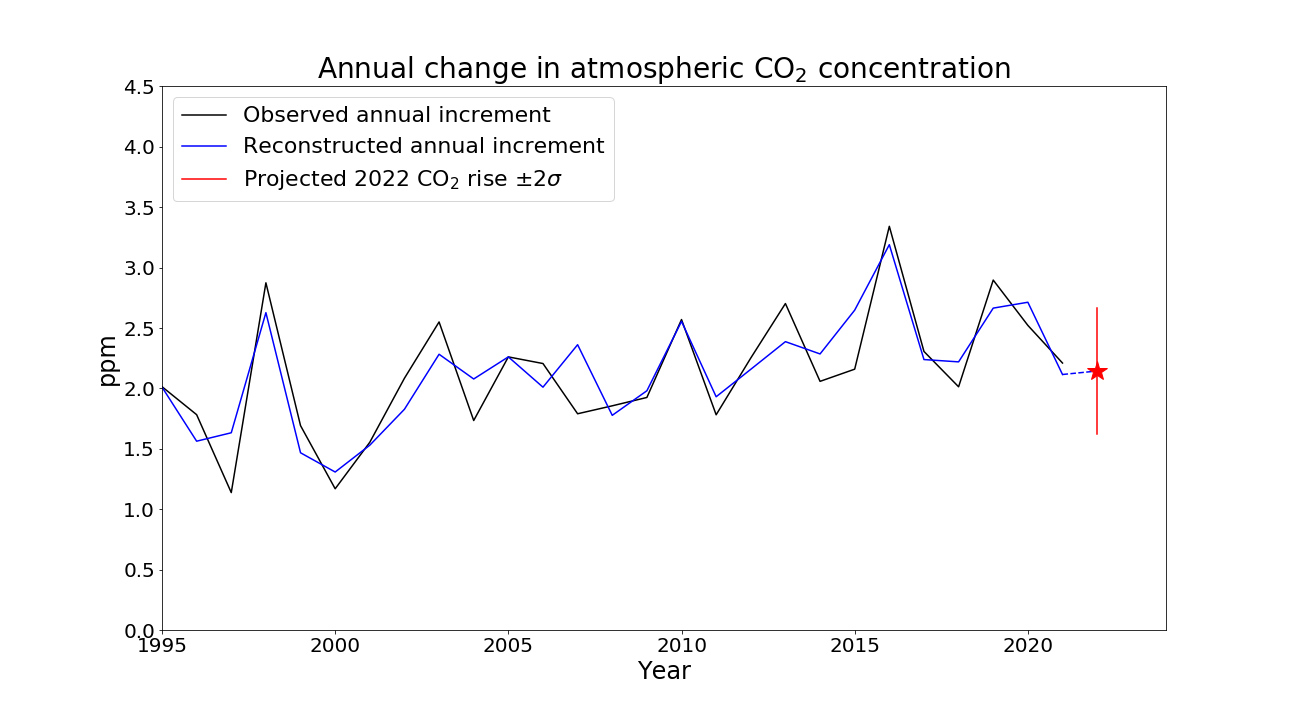 Figure 2. Annual increments (growth rate) in CO2 concentration at the Mauna Loa observatory from observations (black) and the 2021 forecast 2022 forecast (red star). The forecast uncertainty range (red line) is ± 2 standard deviations.  The blue line shows statistical reconstructions of past annual CO2 increments using the same method as used in the forecast. Observations are from the Scripps Institution of Oceanography, UC San Diego.

Specifically, this natural climate variability is the current La Niña event, marked by cooler-than-usual sea surface temperatures in the equatorial Pacific Ocean which are generally associated with modified global weather patterns that make many tropical land regions wetter and cooler. These increase plant growth, temporarily increasing the uptake of CO2 from the atmosphere and hence temporarily slowing the build-up of CO2 due to anthropogenic emissions.

We can estimate the potential contribution of La Niña conditions to the CO2 rise forecast for 2022 by repeating our forecast calculation without the sea surface temperature change, ie: with "neutral" conditions. This suggests that without a La Niña response in the atmosphere and tropical land ecosystems, the forecast annual mean CO2 rise from 2021 to 2022 would be 2.38 ppm (Table 1).

Table 1. Annual emissions and the resulting mean CO2 increment for 2021-2022 calculated with and without La Niña sea surface temperatures (SSTs). The increment is shown both in parts per million (ppm) and gigatonnes of carbon (GtC) to allow comparison with the emissions.

We also predict the maximum and minimum monthly values in the seasonal cycle of CO2 concentrations at Mauna Loa.  Each year, the CO2 at Mauna Loa increases in the first 5 months, peaks in or around May, then declines for the next 4 months due to the uptake of CO2 by land ecosystems in the northern hemisphere growing season.  Following a minimum, which is usually in September, atmospheric CO2 then increases again as autumn and winter leaf-fall and decay cause a release of CO2 back to the atmosphere. In 2022, we predict this seasonal cycle to peak at a monthly mean value of 421.5 ± 0.5 ppm in May (Figure 1, Table 2). This will be the first time in the Keeling Curve record that monthly CO2 levels have exceeded 420 ppm, and from comparison with reconstructions of past CO2 levels from isotopes of carbon and boron in marine sediments, this will be the highest atmospheric CO2 concentration for over 2 million years.

CO2 will then return to a minimum monthly value of 415.2 ± 0.5 ppm in September before rising again.

Passing a symbolic threshold: 50% above pre-industrial

Despite the smaller rise expected in 2022, CO2 concentrations are still increasing and will once again reach the highest values on record. For most of this year, atmospheric CO2 will be at levels more than 50% higher than when humanity began large-scale burning of fossil fuels in the industrial revolution in the late 18th Century. Ice core records show that the average CO2 concentration for 1750 -1800 was 278 ppm.  A 50% increase on this (417 ppm) is already being exceeded at the time of publication of this forecast in early January, and the monthly average values are predicted to remain above this level until July, and then again from November onwards. While concentrations were above this level for several weeks in 2021 from April until June, 2022 will be the first year with the annual average at more than 50% above pre-industrial levels.

This 50% increase above pre-industrial is of symbolic importance because it represents half-way towards "doubled CO2", a standard level of climate forcing used for quantifying the response of global temperatures to human-caused increases in greenhouse gases. Although "halfway to doubled CO2" is not of any physical significance, it can nevertheless be considered a milestone that highlights how much humans have already altered the composition of the global atmosphere and increased the amount of a gas that warms the global climate. 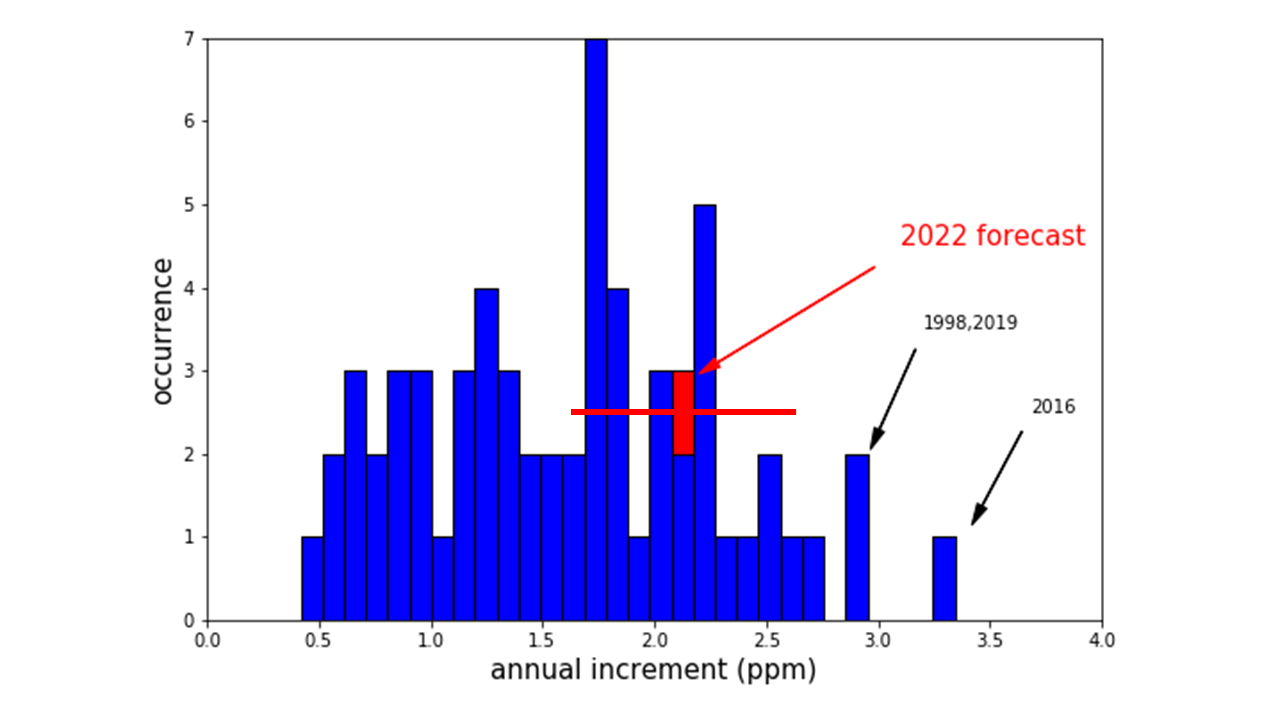 Figure 3. The central estimate of the forecast annual CO2 increment for 2021-2022 in the context of the frequency distribution of the observed annual increment for each year in the Mauna Loa record. The horizontal red bar shows the forecast uncertainty range of ± 0.52 ppm.

The long-term rise in atmospheric CO2 will depend on the rate of anthropogenic emissions. The Paris Agreement commits nations to reducing CO2 emissions as a central part of pursuing efforts to limit the rise in global temperatures to 1.5°C above pre-industrial levels. To illustrate a CO2 concentration trajectory consistent with this goal, the SSP1-1.9 scenario is assessed by the IPCC as limiting warming to 1.5°C in the long term (in the central estimate). This scenario can therefore provide a benchmark against which the observed atmospheric CO2 rise can be compared as part of assessing progress towards the Paris Agreement goal.

If atmospheric CO2 concentrations are to follow those in the SSP1-1.9 scenario, the rate of rise will need to slow rapidly over the next 2 decades and come to a halt in the early 2040s (Figure 4). The average CO2 rise over the 2020s would need to be similar to that forecast here for 2022 (Table 4), but since this year's slower rise is assisted by La Niña conditions which will be temporary, maintaining the low rate of CO2 rise over several years would require immediate and substantial reductions in global CO2 emissions. 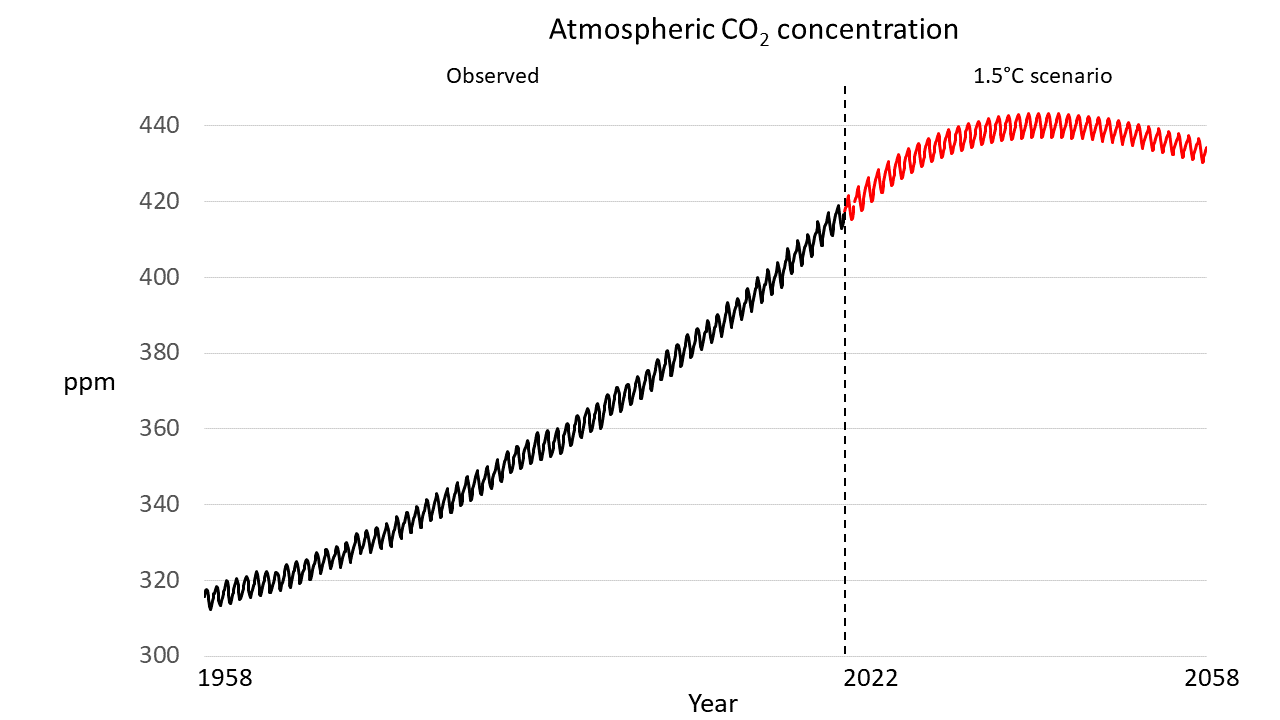 Figure 4. Monthly CO2 concentrations from observations up to 2021 (black) and a future projection consistent with limiting global warming to 1.5°C (red). Observations are the Keeling Curve record at Mauna Loa, from the Scripps Institution for Oceanography, UC San Diego, which began in March 1958. Values for 2022 are the Met Office forecast. From 2023 onwards, monthly values are calculated from the annual mean concentrations in the SSP1-1.9 scenario, with an illustrative seasonal cycle imposed which continues the amplitude seen in recent years. The end date of 2058 is chosen to provide an illustration of a century of CO2 concentrations from the start date of the Keeling Curve record.

For atmospheric CO2 to stop rising completely in the early 2040s as in SSP1-1.9, global CO2 emissions would need to continue to fall rapidly to levels low enough to be balanced by natural carbon sinks. The subsequent decline in atmospheric CO2 concentrations in SSP1-1.9 would require anthropogenic emissions to decline further to zero in approximately the middle of the century, or at least "net zero" whereby any remaining emissions are balanced by direct anthropogenic removal of CO2 from the atmosphere. While SSP1-1.9 is not the only scenario consistent with limiting global warming to 1.5°C, and the compatible emissions pathways are subject to uncertainties in carbon cycle feedbacks, the need for CO2 emissions to reach net zero around mid-century in order to limit global warming to 1.5°C is well-established.

The technique used to make this forecast was also used to make forecasts ahead of time for 2016, 2017, 2018, 2019, 2020 and 2021.  In 2020 we also issued an updated forecast once it became clear that the response to the Covid-19 pandemic would cause global CO2 emissions to be much smaller than expected that year.

From 2016 to 2019, our forecasts included the assumption that the emissions in the coming year would be the same as the previous year, as normally the year-by-year changes in emissions are not large enough to affect the forecast substantially. Our original forecast for 2020 also made this assumption, while our revised 2020 forecast included an adjustment based on projected emissions profiles across the year applied to an atmospheric transport model. Our forecast for 2021 assumed that global emissions would be the same as 2019, having already returned to near those levels at the end of 2020.

Figure 5 and Table 6 compare the 2021 forecast with observations for each month. In our forecast we had assigned the same uncertainty to monthly and annual values, but this ignores the role of within-year impacts such as periods of fire activity in areas not typically affected by ENSO, or anomalous wind directions at the measurement site at Mauna Loa. Quantification of these additional sources of uncertainty at monthly levels are a topic of ongoing research. and our stated uncertainty on the monthly averages will therefore be an underestimate. 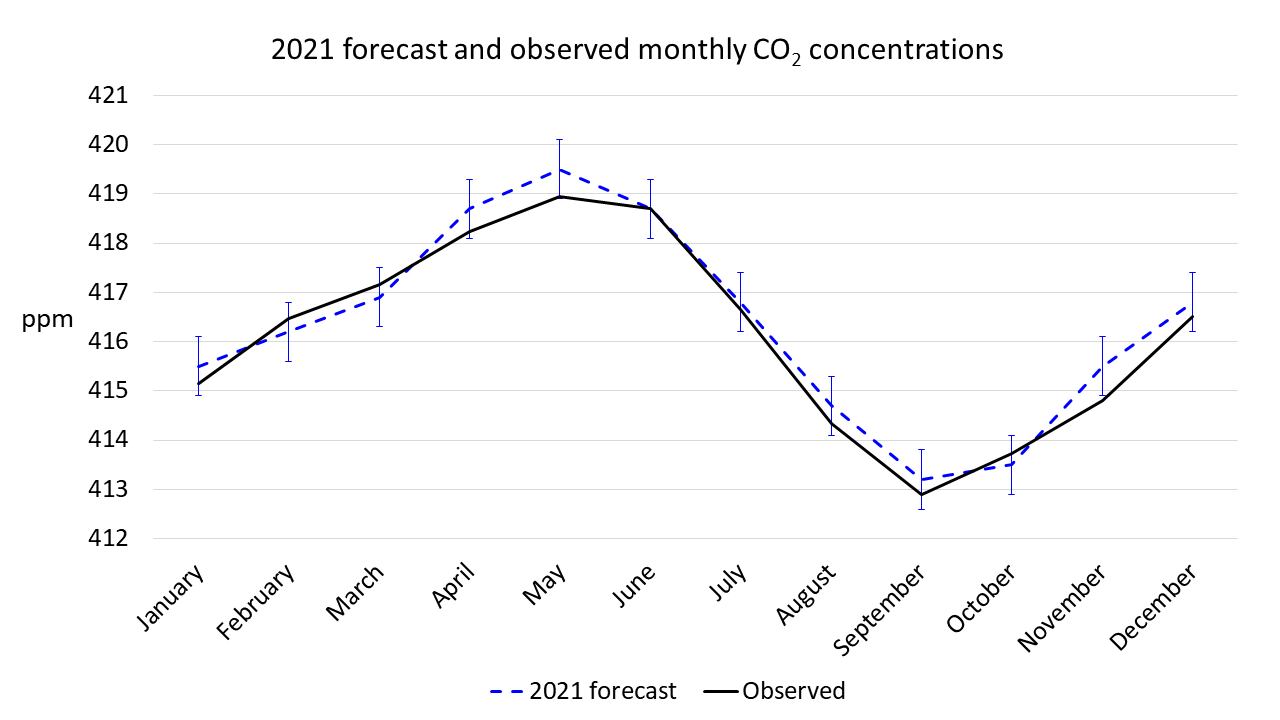 These natural sinks of carbon vary in strength from year to year as a result of short-term fluctuations in climate, principally through El Niño Southern Oscillation (ENSO) cycles in the Tropical Pacific Ocean. The annual CO2 rise is faster during El Niño conditions and slower during La Niña conditions. The Met Office CO2 forecast therefore takes account of both anthropogenic emissions and the impacts of climate variability on natural carbon sinks. So far, including the effect of ENSO variability has in all years brought the central value of the CO2 rise forecast closer to the observations than when considering anthropogenic emissions alone (Figure 6). 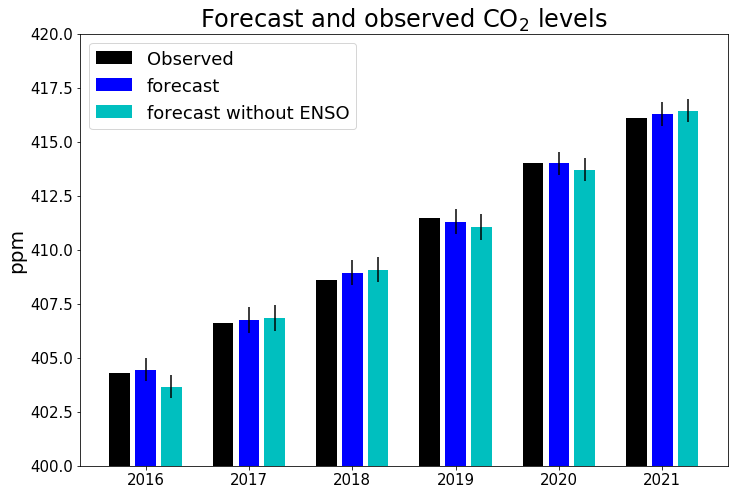 Acknowledgement: The Met Office thanks Matthew Jones for assistance with data processing