Forecast of the annual rise in atmospheric carbon dioxide concentration measured at the Mauna Loa, Hawaii for 2020

NOTE: THIS FORECAST WAS PUBLISHED IN JANUARY 2020 BEFORE THE COVID-19 PANDEMIC LED TO A REDUCTION IN CO2 EMISSIONS. A REVISED FORECAST ACCOUNTING FOR THE IMPACTS OF THE PANDEMIC ON EMISSIONS WAS PUBLISHED IN MAY 2020.
The atmospheric carbon dioxide concentration will continue to rise in 2020 due to emissions from fossil fuel burning, land use change and cement production, with this year's annual rise being relatively large and similar to last year's due to a continuation of the temporary weakening of the land carbon sink caused by climate variability. This accelerates this year's annual CO2 rise by about 10%, with between 1% and 2% due to 2019/20 Australian bushfires.
We forecast the annual average CO2 concentration at Mauna Loa to be 2.74 ± 0.57 parts per million (ppm) higher in 2020 than in 2019 (Figure 1). This will continue the rising trend in CO2 seen in the long-term record of measurements from the Mauna Loa observatory in Hawaii that date back to 1958 and are a good guide to global CO2 levels. As a result, we forecast the 2020 annual average CO2 concentration at Mauna Loa to be 414.2 ± 0.6 ppm. For the first time, monthly CO2 levels will exceed 415 ppm (during spring and summer) and will remain above 410 ppm for the entire year. 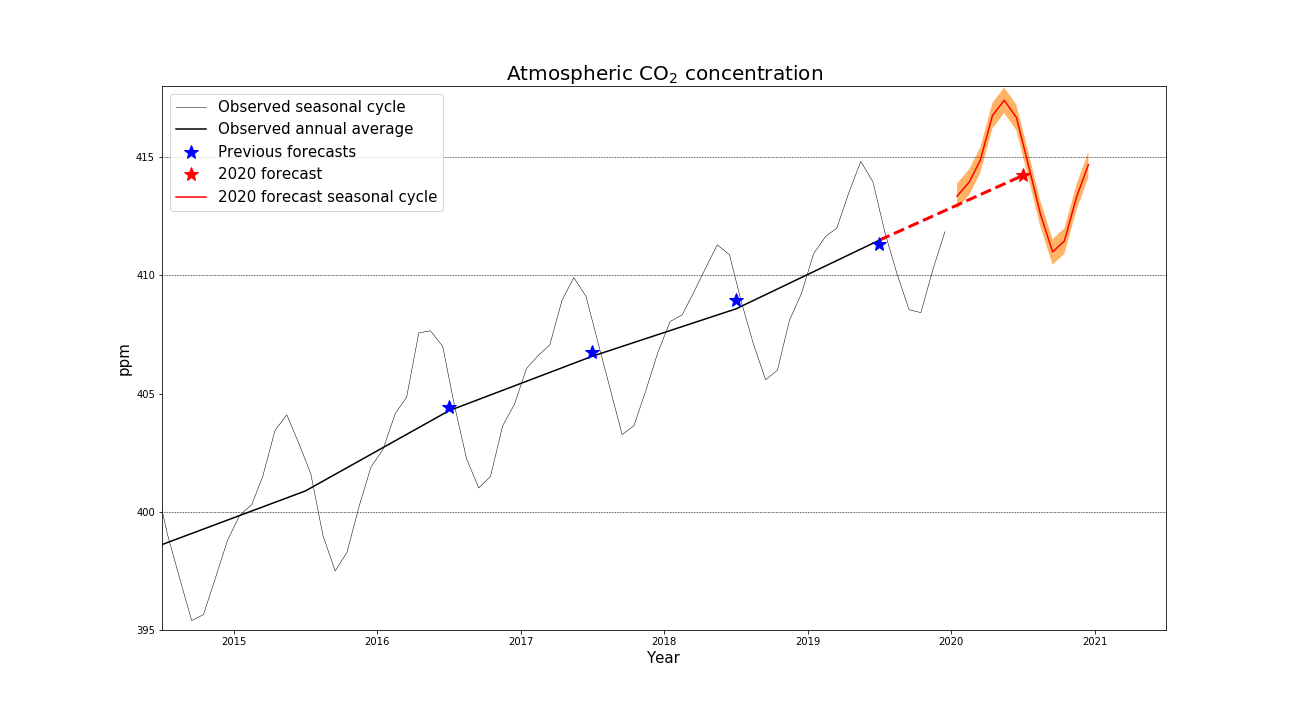 The size of the annual CO2 rise depends on anthropogenic emissions and the strength of natural carbon sinks which are affected by climate variability.  Our method uses a statistical relationship between the annual CO2 rise, anthropogenic CO2 emissions and sea surface temperatures (SSTs) in the Niño3.4 region of the equatorial Pacific Ocean. We predict the rise between 2019 and 2020 will be similar to that between 2018 and 2019, which was larger than in the previous two years (Figure 2), because of relatively warm temperatures in the Niño3.4 region. Such "El Niño-like" conditions are generally associated with modified tropical weather patterns that make many land regions drier and reduce the ability of plants to grow and absorb CO2, temporarily reducing the removal of CO2 from the atmosphere. Along with other patterns of atmospheric variability, this has played a role in the recent hot and dry conditions in Australia, which contributed to the severity of the bushfires. The high temperatures were also made even more extreme by the ongoing warming due to anthropogenic climate change. 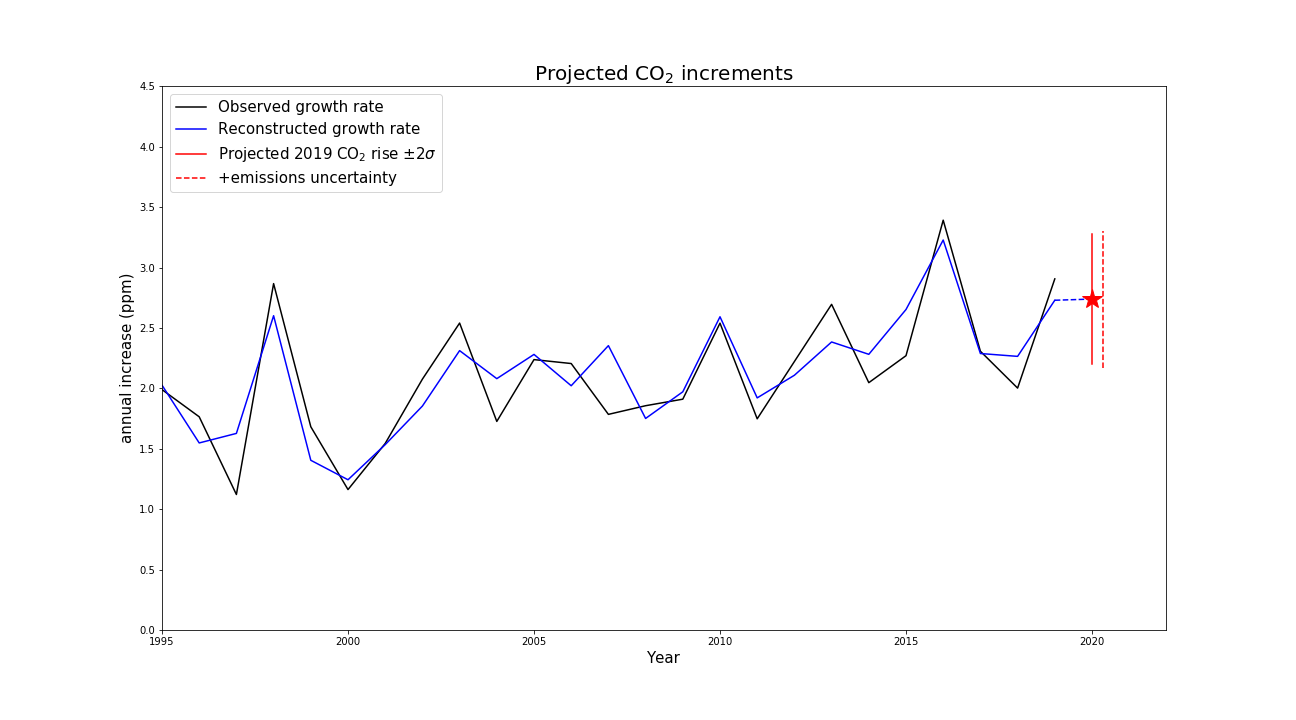 Figure 2. Annual increments (growth rate) in CO2 concentration at the Mauna Loa observatory from observations (black), our statistical reconstructions and past forecasts (blue) and 2020 forecast (red). The forecast uncertainty range based on the SST forecast (solid red line) is ± 2 standard deviations. Uncertainty in the 2019 emissions increases the total uncertainty slightly (dashed red line).

Estimates from the Global Carbon Budget suggest that total emissions from fossil fuel burning and land use change increased from 11.49 GtC in 2018 to 11.56 GtC in 2019, so this will also have made a small contribution to a faster rise in CO2 concentrations.

The CO2 concentration at Mauna Loa also varies during the year due to uptake of CO2 by ecosystems in the northern hemisphere spring and summer growing season and a release of CO2 as vegetation dies back in autumn and winter.  In 2020, assuming the usual atmospheric and land ecosystem response to the mild warming in the Pacific, we forecast this seasonal cycle is to peak at 417.4 ± 0.6 ppm in May and return to a minimum of 411.0 ± 0.6 ppm in September before rising again. (Figure 1, Table 1).

Long-term increases in observed CO2 are entirely the result of human-caused emissions of carbon dioxide into the atmosphere – more than enough CO2 has been emitted by fossil fuel burning, cement production and deforestation to account for the increase measured in the atmosphere. CO2 concentrations have increased by about 30% since measurements began at Mauna Loa, but this increase would have been larger if some CO2 had not been removed from the atmosphere by absorbed by plants and the oceans.

These natural sinks vary in strength from year to year as a result of short-term fluctuations in climate, principally through El Niño-La Niña cycles in the Tropical Pacific Ocean. As a result, the Met Office CO2 forecast takes account of both anthropogenic emissions and the impacts of climate variability on natural carbon sinks.  Our forecast for the 2019-2020 CO2 rise uses the annual total CO2 emissions from 2019 and sea surface temperatures observed from April to October 2019 and forecast from November 2019 to March 2020.

We can estimate the potential contribution of El Niño-like conditions to the forecast CO2 rise by repeating our forecast calculation without the sea surface temperature change, ie: with "neutral" conditions. This suggests that without an El Niño-like response in the atmosphere and tropical land ecosystems, the annual mean CO2 rise would be 2.48 ppm (Table 2).

Contribution of emissions from the 2019/20 Australian bushfires

Preliminary data from the Global Fire Emissions Database* suggest that between 0.1 and 0.2 Gt C were emitted by the recent Australian bushfires. Using this in our forecast method, we calculate that would contribute approximately 0.02 and 0.05 ppm to the CO2 rise.

The contribution of carbon release from the bushfires would be partly accounted for in our forecast, since our method is based on a statistical relationship between annual CO2 rise and SSTs in the equatorial Pacific, and the Pacific SSTs are considered to have played a role in causing the hot, dry conditions in Australia.  However, other factors including Indian Ocean SSTs and sudden stratospheric warming also made substantial contributions, and these would not be captured by our statistical method.  Because of the partial contribution of ENSO SSTs, we do not include the bushfire emissions as an additional factor in our CO2 forecast. In principle, the non-ENSO contribution to the bushfires could be considered as an additional factor. In our current method, the impact of this included within the error bars.  Quantifying the relative contributions of ENSO, other modes of climate variability and anthropogenic climate change to the bushfires and the resulting emissions requires further investigation.

A further point is that if the Australian ecosystems fully regrow and achieve their pre-bushfire biomass, the emissions from the fires could be considered a temporary addition to the atmosphere. Nevertheless, it is possible that the widespread impact of the fires and potentially an altered wildfire regime might result in a new ecosystem state with a lower biomass.  All these are important avenues for future research.

The forecast CO2 rise of 2.74 ± 0.57 ppm for 2020 would be the fourth largest annual increment on record (Figure 3). The annual increments have generally been increasing over time as a result of rising anthropogenic emissions. The largest on record was 2016, due to a major contribution from the 2015/16 El Niño event. The second largest was in 2019, slightly larger than 1998, despite a major El Niño in 1997/98 and only minor El Niño-like conditions in 2018/19. The increase in anthropogenic emissions between 1998 and 2019 meant that a smaller ENSO contribution was able to bring the annual CO2 rise to the level of a previous large increase. 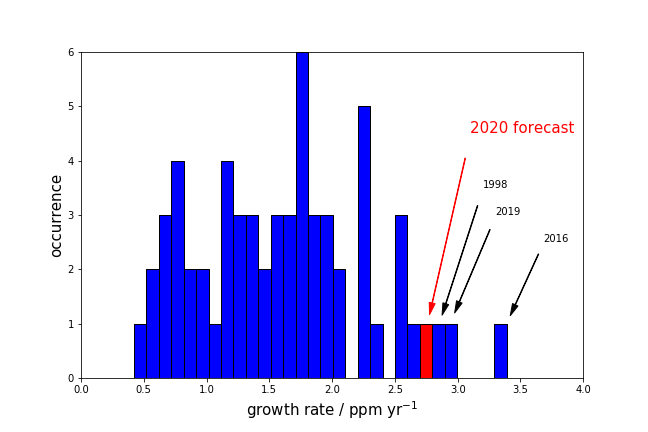 The technique used to make this forecast was also used to make forecasts ahead of time for 2016, 2017, 2018 and 2019. The methodology combines ocean observations and seasonal forecasts with a statistical prediction of their impact on carbon sinks. When applied to latest estimates of fossil fuel burning, it gives us a predicted growth rate for the coming year. Figure 4 and Tables 3 and 4 provide a summary verification of our previous forecasts.  The CO2 rise from 2015 to 2016 was successfully forecast to be the largest on record (Table 3), due to the amplifying effects of the large 2015/16 El Niño event, and the rises in 2016/17 and 2017/18 were also successfully forecast to be more moderate. The 2018/19 CO2 rise was succesfully forecast to be larger than 2016/17 and 2017/18 but not as large as 2015/16. 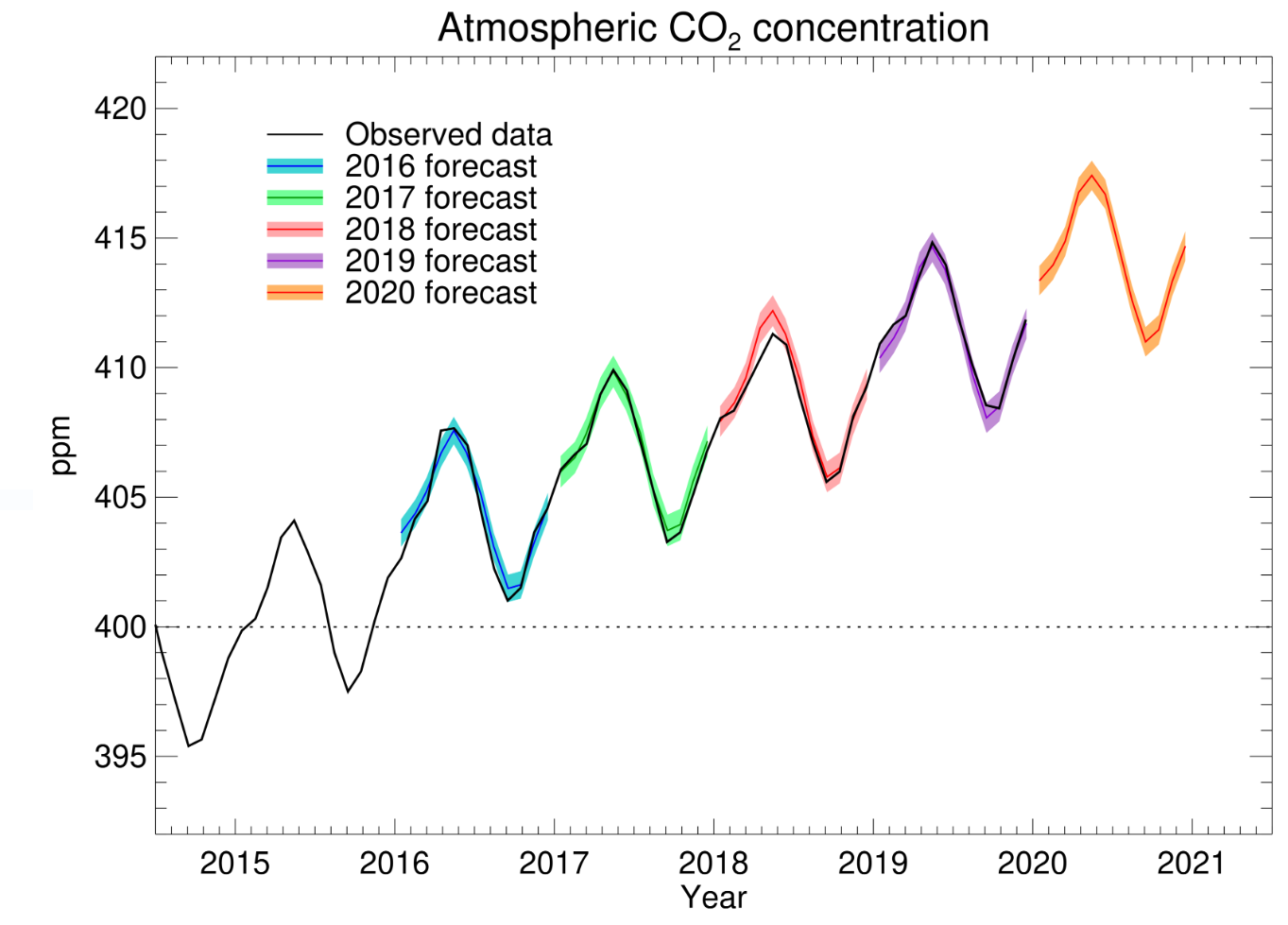 Table 4. Forecast and observed monthly average CO2 concentrations at Mauna Loa over 2019. The uncertainty in the forecast values was ±0.6 ppm

Including the effect of ENSO variability improves the skill of the CO2 rise forecast beyond that which would be achieved by considering anthropogenic emissions alone (Figure 5). In 2016, consideration of the large El Niño event allowed the record rise in atmospheric CO2 to be successfully forecast. The 2016 rise would have been underestimated without this. In 2018, the CO2 rise would have been overestimated if the effects of the La Niña conditions had been neglected. 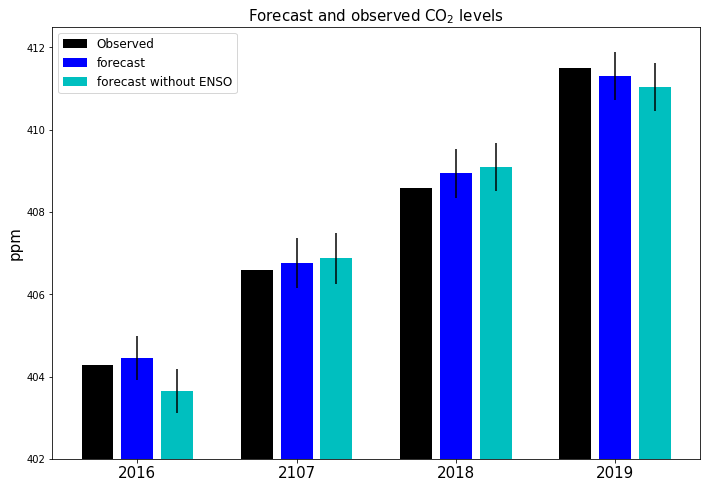 GFED presents annual total emissions for all of Australia. Preliminary estimates of the emissions from the recent bushfires in New South Wales and Victoria were kindly provided by the GFED t