Airspace around the British Isles was shut down for several days in April 2010 following the eruption of the Icelandic Eyjafjallajökull volcano, resulting in 108,000 cancelled flights. However, the Icelandic Grímsvötn volcanic eruption only 13 months later (in May 2011) had only limited impacts. Despite the Grímsvötn eruption being the most powerful Icelandic eruption in almost 100 years, there were just 900 flights cancelled.

While both eruptions produced ash clouds which impacted on aviation, the stark differences in impacts between the two eruptions can be predominantly attributed to differences in atmospheric circulation. In April 2010, Atlantic high pressure drove the flow (and therefore volcanic ash) from Iceland towards the British Isles. Whereas in May 2011, a low pressure system in the North Atlantic drove the ash cloud away from the British Isles and towards northern Scandinavia, therefore limiting the impact of the volcanic ash on trans-Atlantic and European aviation.

Understanding the risk of flow from Iceland towards the British Isles 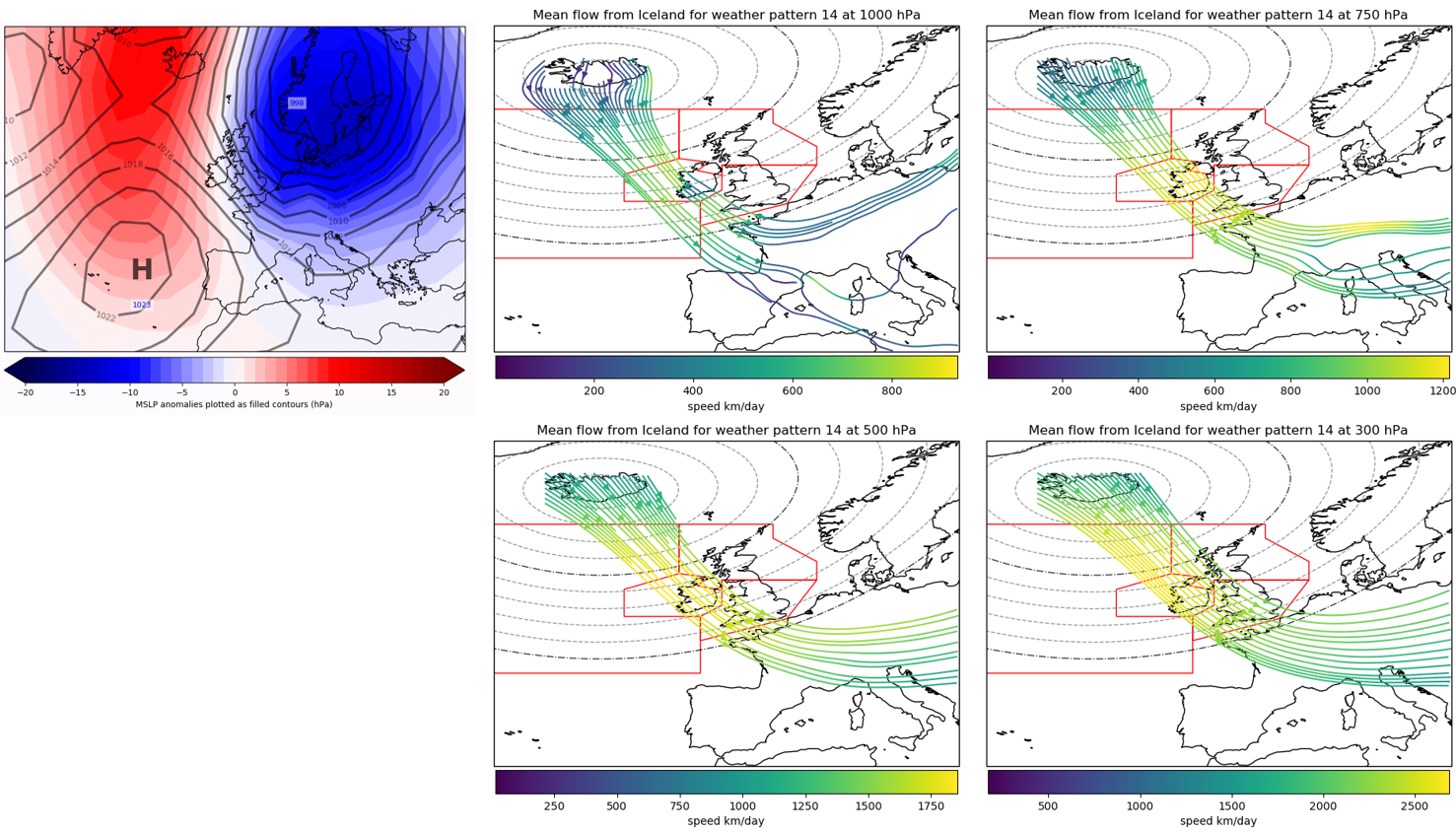 Figure 1. Weather pattern 14 (left) and associated flows from Iceland for the four heights (right), split into lower level (1000 hPa and 750 hPa – top) and upper level (500 hPa and 300 hPa - bottom) flows. The red boxes highlight the four Flight Information Regions of controlled airspace over or around the British Isles. Coloured lines denote the stream flow lines which represent the transport of air from Iceland. 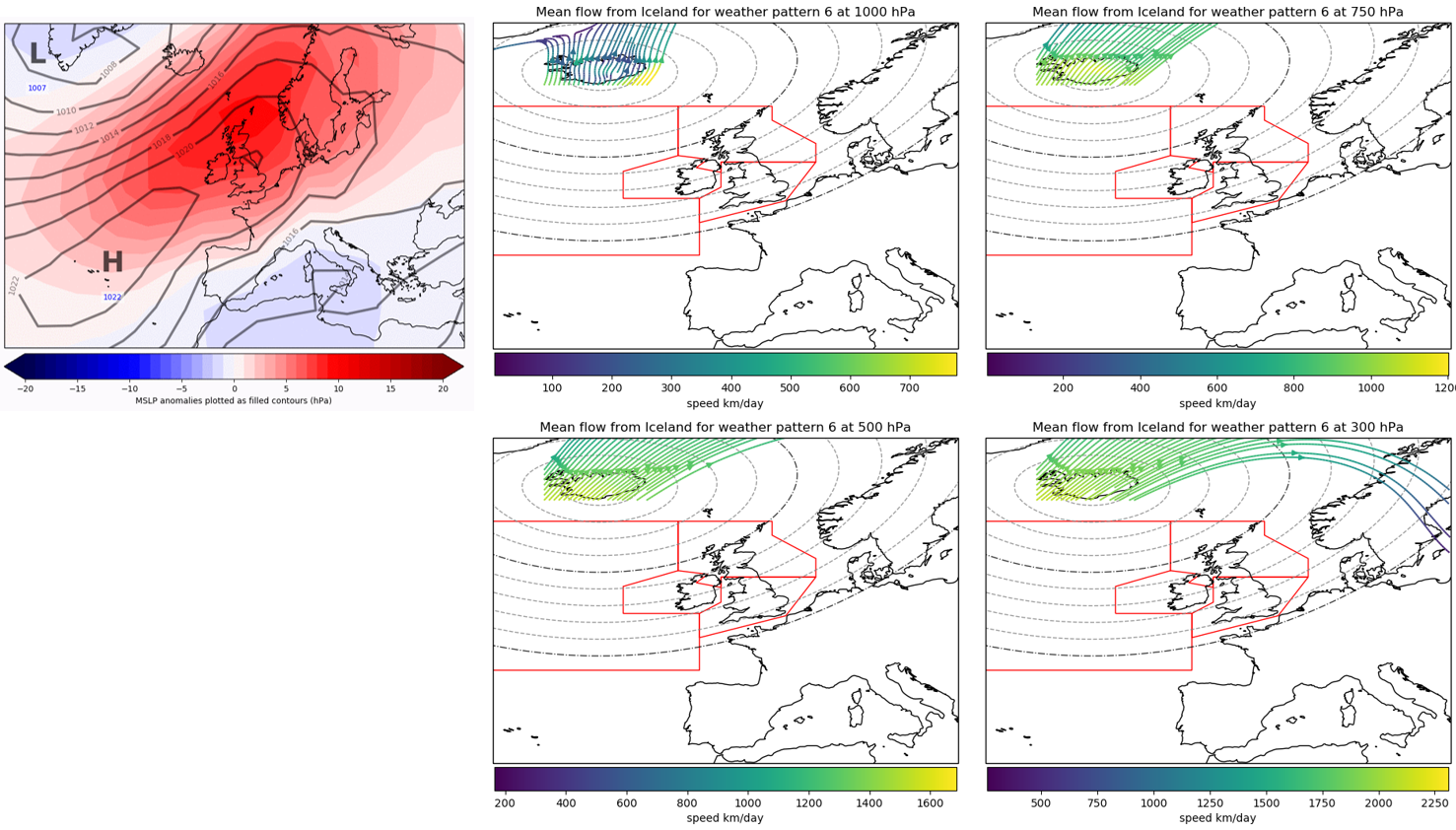 Figure 2. Weather pattern 6 (left) and associated flows from Iceland for the four heights (right), split into lower level (1000 hPa and 750 hPa – top) and upper level (500 hPa and 300 hPa - bottom) flows. The red boxes highlight the four Flight Information Regions of controlled airspace over or around the British Isles. Coloured lines denote the stream flow lines which represent the transport of air from Iceland.

The climatological frequency of the 14 high-risk weather patterns (Figure 3) shows that their occurrence is possible in all seasons. However, the risk of flow from Iceland is greatest in the winter and least in the summer, with a transition between these in the spring and autumn. Additionally, the duration of these events were assessed, with the majority of events lasting between three and five days. There are also a noticeable number of events that could last eight to ten days, similar to the duration of the Eyjafjallajökull eruption in April 2010. 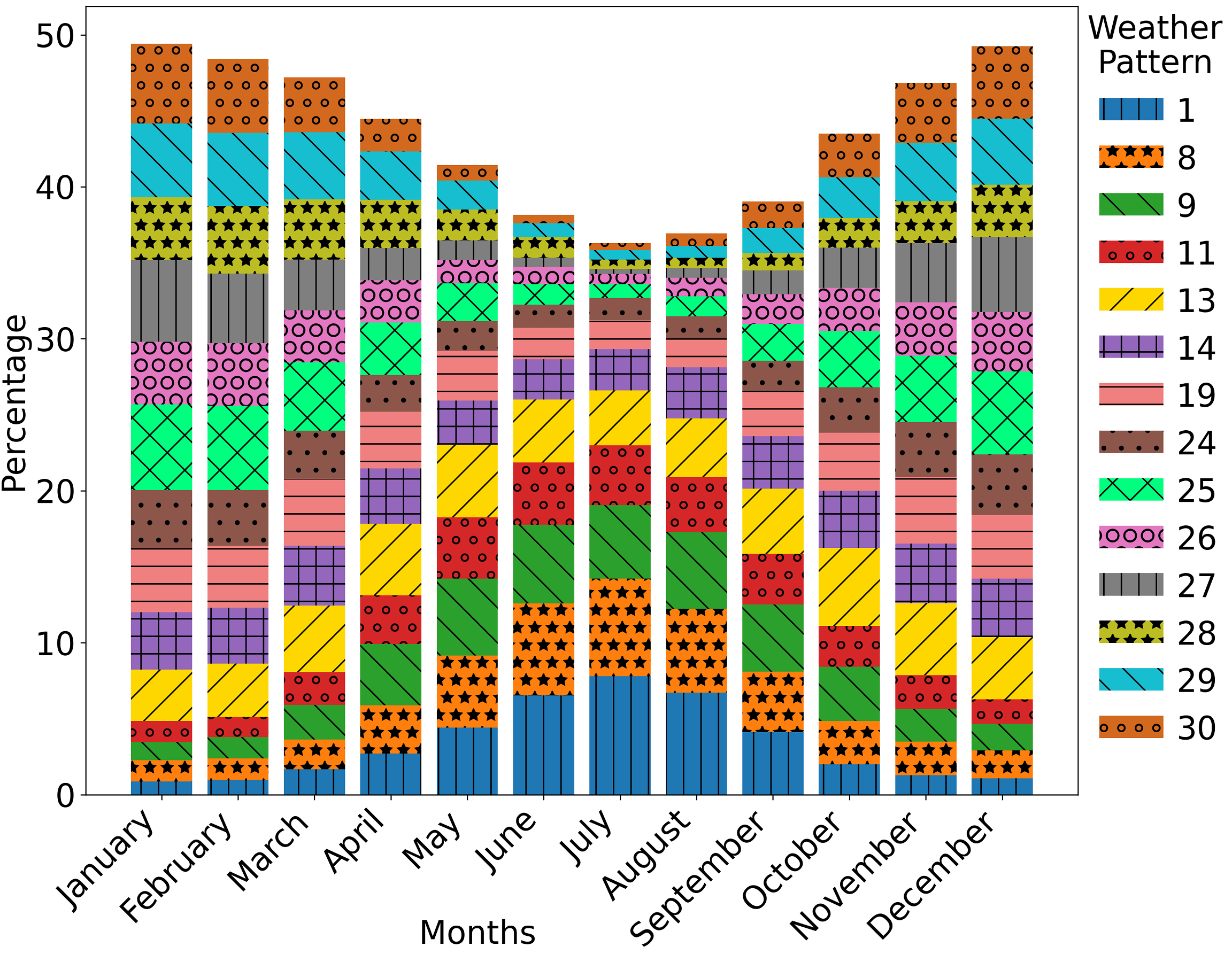 Figure 3. Monthly frequency of each weather pattern which could result in flow from Iceland.

The Icelandic Meteorological Office provides a colour coded assessment of the current risk to aviation posed by each Icelandic volcano. Should a volcano reach an elevated status (indicating that an eruption is more likely) then the weather patterns identified here can be used as a tool to determine the risk of impacts on aviation around the British Isles over the medium-range forecast period (one to two weeks ahead). 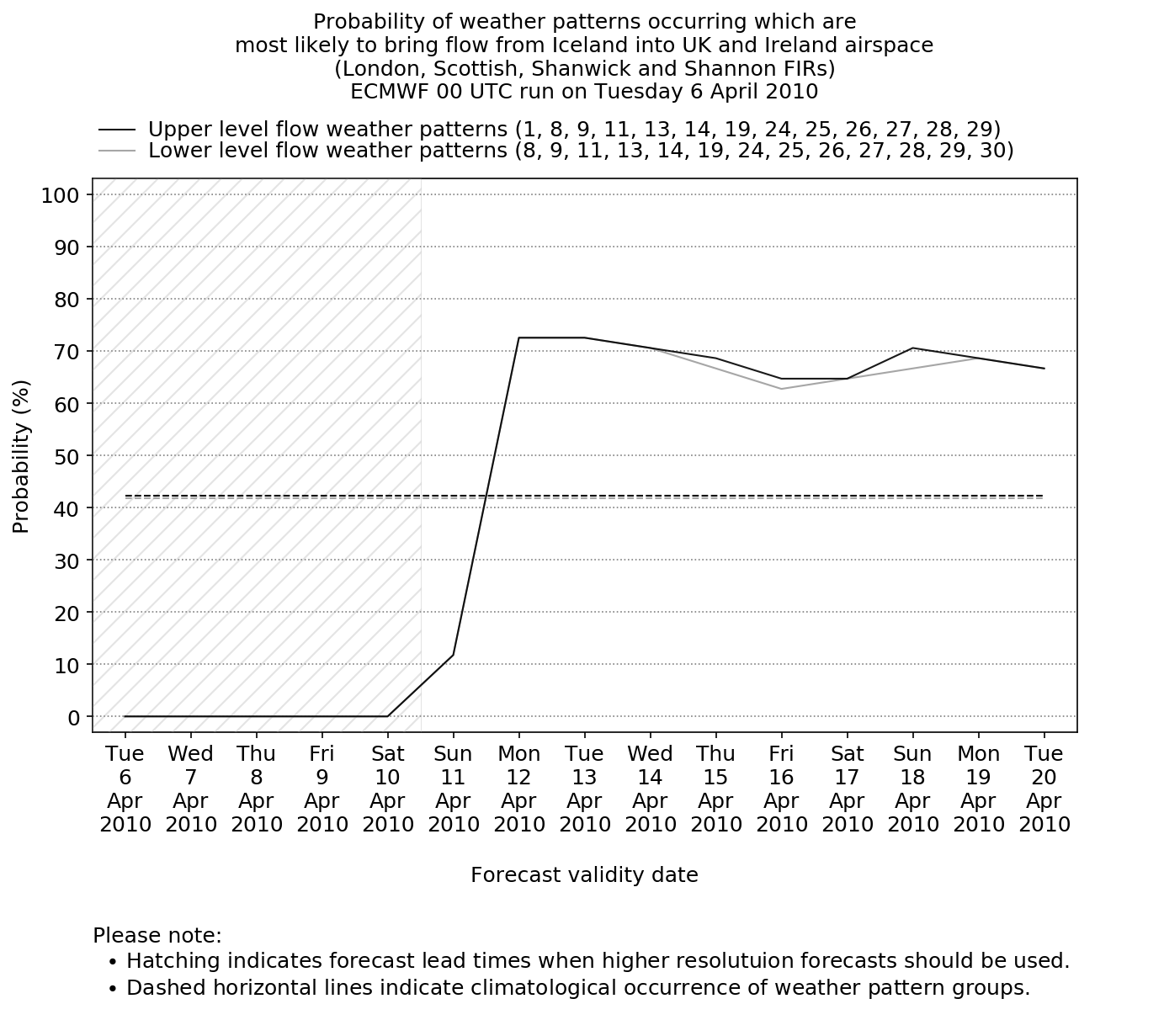 Figure 4. The forecast probability of weather patterns occurring which are most likely to bring flow from Iceland into UK airspace based on the 0000 UTC ECMWF ensemble run initialised on 5th April 2010. Horizontal dashed lines show the climatological occurrence of the high-risk weather pattern groups relative to the time of year and solid lines show the forecast probabilities.

In this forecast example, were a forecaster to have access to this tool, and given the heighten activity around Eyjafjallajökull at the time, they could observe that there was little risk in the near-term. However, after five days the probability of weather patterns that could result in flow from Iceland increase to around 70% (between 10th and 12th April 2010) and then persist at this level to the end of the 15-day forecast period (20th April 2010). These probabilities are significantly above the climatological occurrence for April (horizontal dashed line) and therefore flow from Iceland is much more likely than usual. The prolonged duration of the increased probabilities also indicates the increased risk of a long period of flow from Iceland and resulting impacts on aviation. Combined with knowledge of an active Icelandic volcano, this would enable the forecaster to raise awareness of possible disruption should the volcano enter an explosive phase during this period with contingency planners.

These forecasts are intended as a decision aid for forecasters, providing a rapid assessment of the risk of volcanic ash originating over Iceland being transported into UK airspace. These forecasts are designed for use from days five or six onwards (as highlighted by the hatching in the forecast example; Figure 3) due to the large spatial scales involved. They will only provide the likelihood of wind flow from Iceland, with dispersion simulations still required from models such as the Met Office Numerical Atmospheric Modelling Environment (NAME; Jones et al. 2007) to accurately assess the concentrations and specific locations of volcanic ash. As such, the weather pattern forecasts are not suitable for the issuance of aviation ash warnings, but instead could be used to provide written forecast guidance for contingency planning purposes and for organisational based internal preparedness.