Satellite image of the month 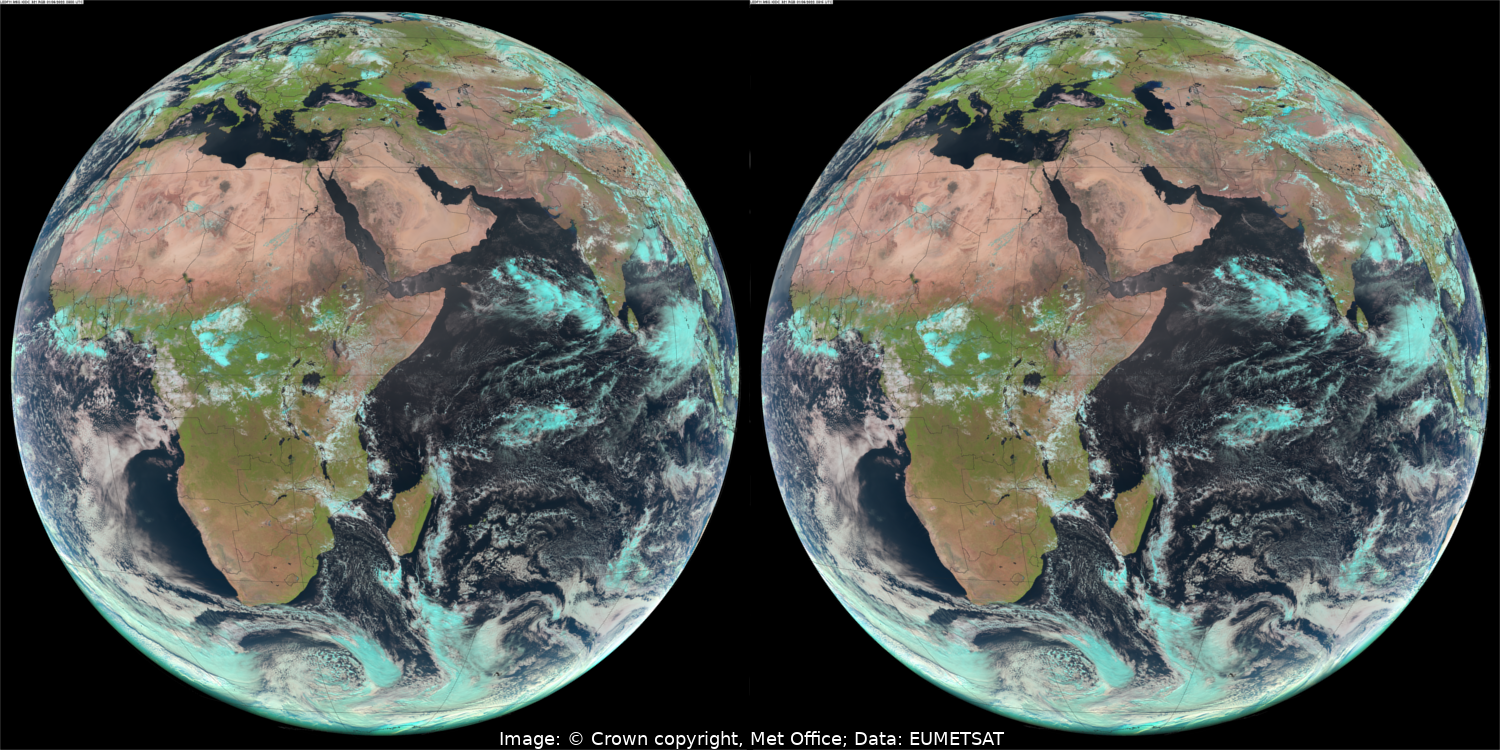 On 1st June 2022 we said farewell to Meteosat-8 after nearly 20 years of service. Although for many years situated over the Greenwich (0º longitude) meridian, the satellite has served the final years of its life offering geostationary weather data over the Indian Ocean Data Coverage region (centred at a longitude of 41.5º), which includes eastern Europe, the Middle East, and western Asia. Meteosat-8 will shortly be firing its thrusters for a final time, propelling it deeper into space to a graveyard orbit - this will minimise the risk to operational satellites if it breaks up. Meteosat-9 has already been moved to cover the Indian Ocean region in its place, albeit from a slightly different position.

Meteosat-8 was launched in 2002. It was the first satellite in the Meteosat Second Generation (MSG) series, providing a step change in capability that we’ll soon experience again with Meteosat Third Generation (MTG). Over its lifetime it has helped us gain insights into the behaviour of many types of severe weather, and also various environmental phenomena such as dust storms, volcanoes and other hazards to aviation and public safety. In addition Meteosat-8 has provided a long and reliable series of atmospheric motion vectors and infrared radiances for use in data assimilation in our Numerical Weather Prediction models.

The picture on the left above shows an image from the final Meteosat-8 data received at the Met Office, just before 0900 UTC on the 1st June 2022. The right hand image shows the equivalent view from Meteosat-9 just 15 minutes later, with the satellite (and hence the image) centred slightly further east at 45.5º longitude. 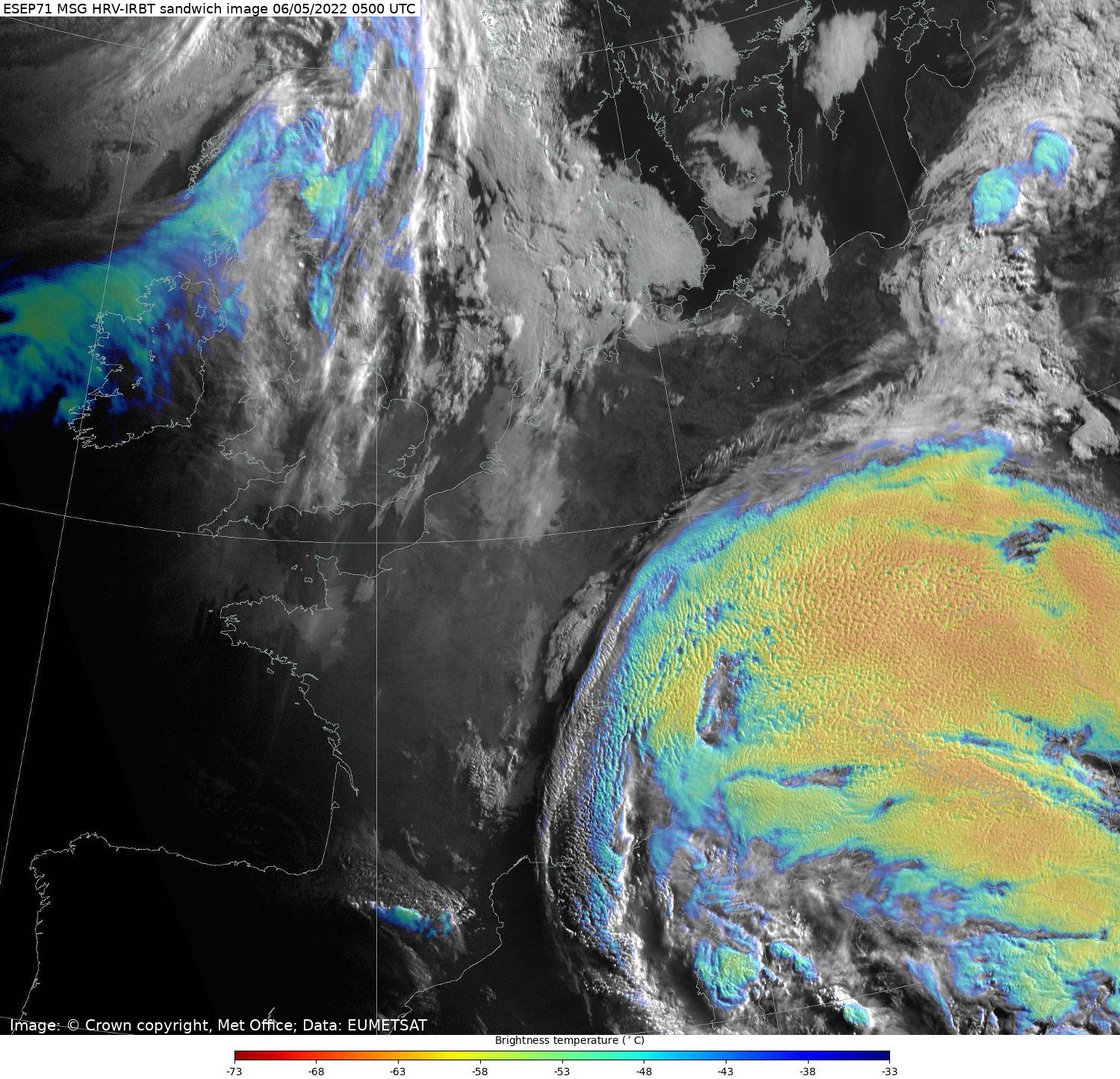 In early May 2022, a large storm carried clouds of Saharan dust northwards, up into central Europe, and also brought distinctive high-altitude cirrus clouds infused with this dust — an example of a so-called Dust-Infused Baroclinic Storm (DIBS) cloud. It is thought that the dust particles act as plentiful ice nuclei in cases such as this, leading to changes in the cirrus clouds' microphysical properties, and lending them the distinctive mottled or "pock-marked" appearance seen in the large area of coloured cloud over central Europe in the image above.

The picture above is an example of a "sandwich" image, incorporating information from both visible and thermal infrared channels from the SEVIRI imaging instrument on board EUMETSAT's Meteosat-11 satellite. The signal from the thermal infrared channel (giving information on the temperature of the cloud tops) is colour coded (as per the legend beneath the image) and made to be transparent, and this is then overlaid onto a high-resolution visible image, so that the physical texture of the cloud-top shows through the coloured infrared temperature signal.

These spectacular cloud streets, known as von Kármán vortices, are formed when a low-level flow of air is disturbed by the presence of an island (or in this case several islands) rising out of the ocean, the diversion of the flow around the island causing spiralling cloud patterns to form downstream. In this case, these clouds were spotted in our satellite imagery during the morning of the 28 April 2022 to the south-west of the Canary Islands.

The left-hand image is created from visible and near Infra-red channels of the SEVIRI instrument on Meteosat-11, a geostationary satellite operated by EUMETSAT (with the combination of channels providing a view near to what the human eye would see, except that ice clouds show up as a cyan colour). The right-hand image shows the equivalent channel combination from the AVHRR instrument on EUMETSAT's polar-orbiting Metop-B satellite at almost exactly the same time. In the latter case, the fact that the satellite is orbiting much closer to the Earth's surface contributes to a higher-resolution image, enabling us to zoom in and see these cloud features in significantly greater detail. 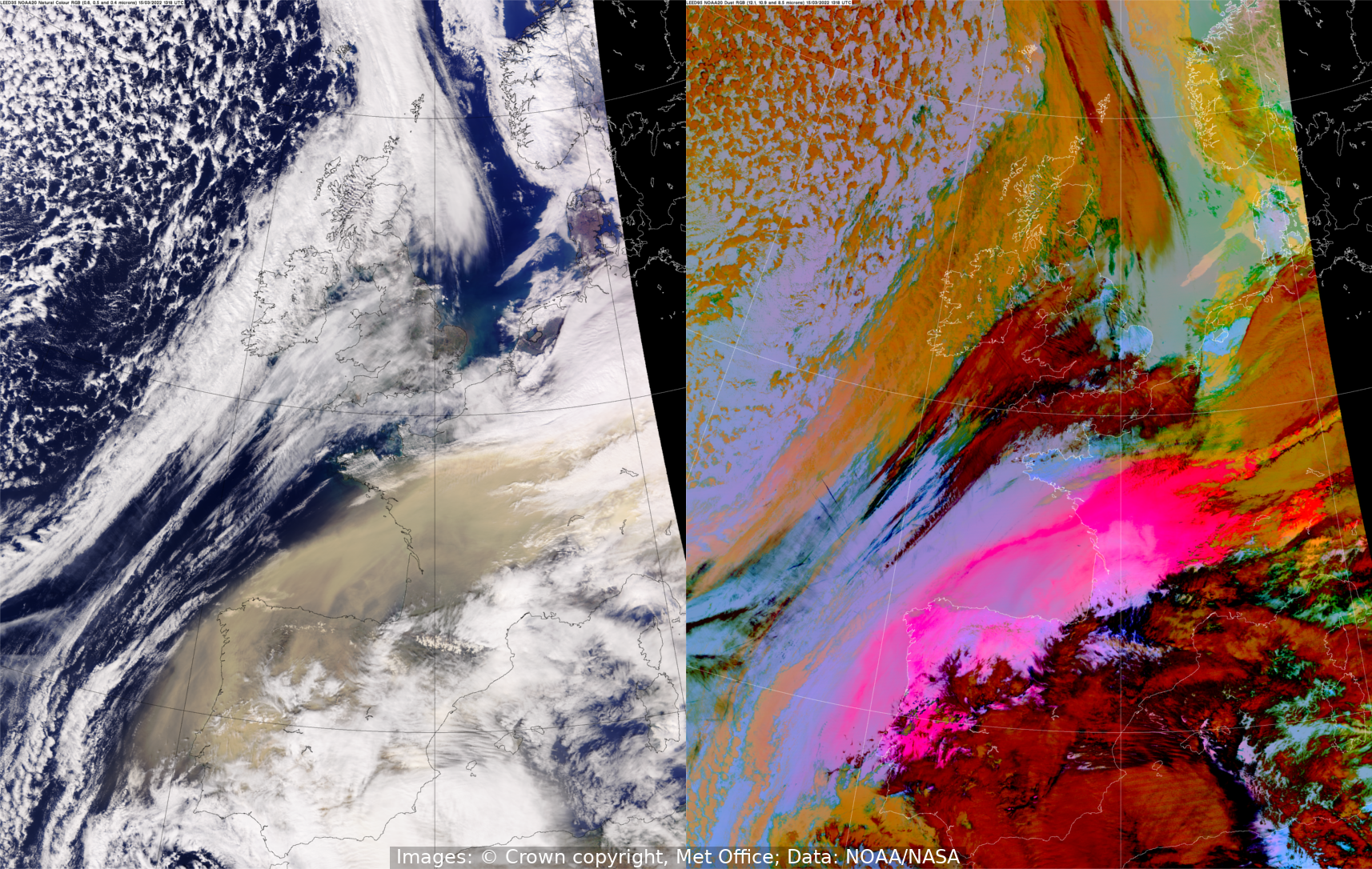 A large cloud of desert dust, created by storms in the Sahara desert, is carried northwards over Spain and France by the wind, as can be clearly seen in this pair of VIIRS satellite images from the NASA/NOAA-operated satellite NOAA-20. Both images show the situation at 1318 UTC on the 15th March 2022. In the left-hand true colour image the dust cloud appears as a sandy light brown colour, whereas in the right-hand image, an infrared false-colour ("Dust RGB") composite, the dust appears as bright pink/magenta colours.

Storm Eunice was named by the Met Office on 14 February 2022, and resulted in the issue of two rare red weather warnings, one for areas of South Wales and South West England and one for London and the South East of England, prior to the storm crossing the UK on 18 February. The left-hand image above shows a visible image taken from the geostationary Meteosat-11 satellite at around 1115 UTC on the morning of 18 February. At a similar time, a wind gust of 122 miles per hour (55 metres per second) was recorded at the Needles, Isle of Wight, provisionally setting a record for the fastest wind gust ever recorded in England.

The right-hand image above shows measured surface winds near the centre of Eunice at a similar time. The colours on the map indicate the instantaneous strength of the wind, with each point representing an average over an area around 30 km across; yellow shades represent the strongest winds (approaching 30 metres per second) for the swath covered, whilst the arrows show the wind direction. These wind data are derived from the Advanced Scatterometer (ASCAT) instrument on-board the polar-orbiting Metop-B satellite. From an orbit of over 800 km above the Earth’s surface ASCAT cannot measure the wind directly. Instead the radar sends down pulses of microwave energy and measures the return signal which is scattered back from the ocean surface. As the wind strength increases the ocean surface becomes rougher and more energy is back-scattered towards the satellite. By taking multiple measurements of the same patch of ocean an estimate of the surface (10 m height) wind speed and direction can be made.

A submarine volcano, located in the South Pacific Island nation of Tonga, began erupting in late December 2021. Activity built in the following weeks, coming to a head on January 15th with a ferocious explosion in the early hours of the day.

The images above show the eruption on January 15th, captured by GOES-17, a geostationary satellite operated by NASA/NOAA. The images are ‘natural colour RGB’ which uses a combination of visible and near infra-red channels to provide a view close to what the human eye would see, except ice clouds show up as a cyan colour. The left image (04:30 UTC), and right image (05:00 UTC) help illustrate the rapid development of the volcano plume.