Storms are very complex systems that play an important role in the transport of heat and energy across the world. Therefore, they can be affected by small changes in regional and global patterns. Some influences on storm activity that are likely to be affected by climate change are:

Under climate change some of these influences will strengthen storms and others weaken them, as well as potentially change the parts of the world that storms affect.

Because storms and the influences behind them are so complex, it is very important to be able to model all these variables, and any expected changes in them due to human influence, as accurately as possible. 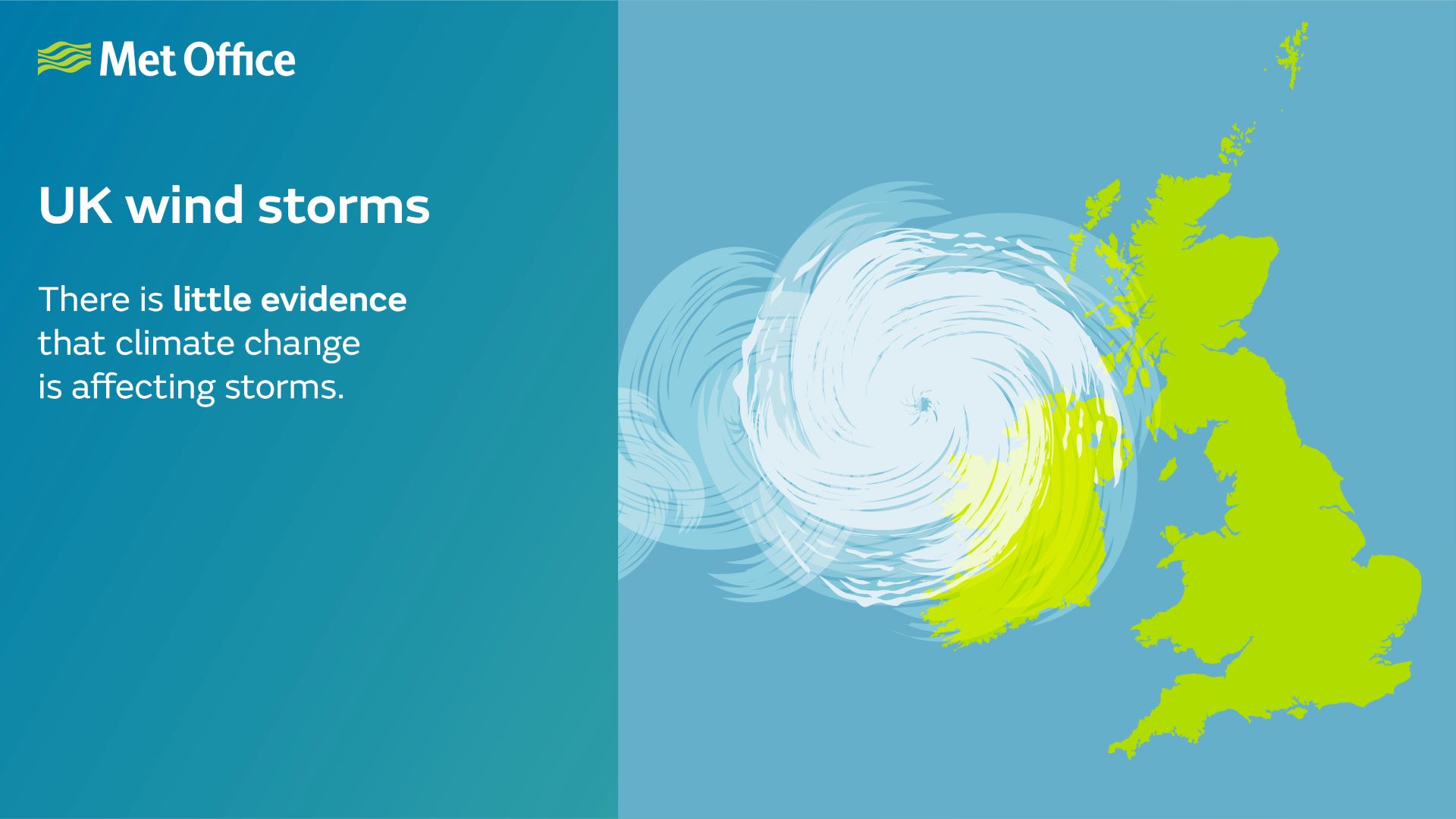 The UK State of the Climate report states that there are no compelling trends in storminess when considering maximum gust speeds over the last four decades. More comprehensive studies across the North Atlantic region have reached similar conclusions.

Due to the lack of any observed trends, there haven’t been any studies so far which provide a link between changes in UK storminess and climate change. For example, the all-time record number of storms over the British Isles in winter 2013/14 couldn’t be linked to human-induced warming.

UKCP18 projected an increase in near surface wind speeds over the UK for the second half of the 21st century for the winter season when more significant impacts of wind are experienced. However, the increase in wind speeds is modest compared to natural variability from month to month and season to season, so confidence is low.

Warming water in the North Atlantic could potentially increase the risk of more ex-tropical storms being directed across the UK during the autumn season. However, similar to winter, there are other factors that influence autumn storms and the number across the UK varies significantly from year to year due to natural influences.

Coastal flooding from storms is expected to increase under climate change due to rising sea levels, worsening the impacts of storm surges. Without adaptation, there is a risk weaker storms could lead to coastal flooding where they wouldn’t have in the past.

Some of the most powerful storms on the planet develop in tropical regions, known as tropical cyclones. The IPCC Sixth Assessment Report concluded that confidence remains low for detecting any long-term changes in tropical cyclone activity.

The mechanics of tropical cyclones and how they interact with our changing climate is extremely complex. While there is no clear evidence that climate change is increasing or decreasing the overall frequency of these storms, there is strong evidence that increasing sea temperatures intensify tropical storms when they develop.

Major storms outside of tropical regions are called extra-tropical cyclones. There is high confidence that damage to the ozone layer has resulted in a poleward shift of storms in the southern hemisphere. However, there is currently low confidence in attributing any changes to the number or position of storms in the Northern Hemisphere, including those affecting the UK.

It is likely that the global frequency of tropical cyclones will either decrease or remain unchanged. At the same time, globally there are very likely to be increases in the maximum wind speeds, proportion of Category 4 and 5 storms, and rates of precipitation for tropical cyclones.

Changes in the strength and frequency of storms are expected in future. Source: IPCC Sixth Assessment Report Working Group 1.

In the long term, the Southern Hemisphere storm track is expected to move southwards because of global warming. However, in the short term there is more uncertainty, as the expected ozone recovery will likely counteract some changes due to global warming. For the Northern Hemisphere there is much less confidence, with natural variation likely to continue to dominate until the end of the century.