In the simplest terms, drought is defined by a lack of water. Unlike most other extreme weather, drought tends to build up over time and can last from as little as a few weeks up to several years.

The severity of drought is usually measured both by its impact on human activities, such as agriculture and leisure, and by its effect on large-scale natural events such as wildfires. The Intergovernmental Panel on Climate Change uses four common types of drought:

A direct link between climate change and drought is complicated by the many meteorological, hydrological, geological, and societal drivers that combine to cause droughts. However, there is increasing evidence that climate change is influencing rainfall patterns in many regions around the world.

Shifting rainfall patterns will likely lead to some regions becoming wetter and others becoming drier. Additionally, these more arid regions could dry further because of global warming.

Warmer temperatures can increase evaporation of water from the ground. As soils become drier, the air above may heat even more, resulting in even more water evaporating, which can further worsen drought. Regions that are not adapted for longer dry spells may therefore experience more prolonged drought.

Because droughts vary in intensity, area, and length, it can be difficult to keep track of them in a way that is meaningful for comparison. Overall, there has been a noticeable increase in temperatures across the UK, while rainfall has also increased recently.

A report on extremes in the UK showed there has been a general decline in the longest sequence of consecutive dry days in recent decades. However, long dry spells are not the official definition of drought, and so whilst dry spells in the UK are getting shorter, this is not an indication of changing levels of drought in the UK.

Currently, there are no UK climate attribution studies available that clearly link human-induced climate change with an altered risk of drought events.

UKCP18 projected a trend towards drier summers on average, with generally stronger drying in southern parts of the UK. It also suggested that the drying trend is stronger under a high greenhouse gas emission scenario compared to a low one.

Recent studies have shown that across Europe, southern regions such as the Mediterranean are likely to become drier, while more northern regions will likely become wetter. However, as temperatures continue to warm, this ‘dry region’ will gradually extend northwards. 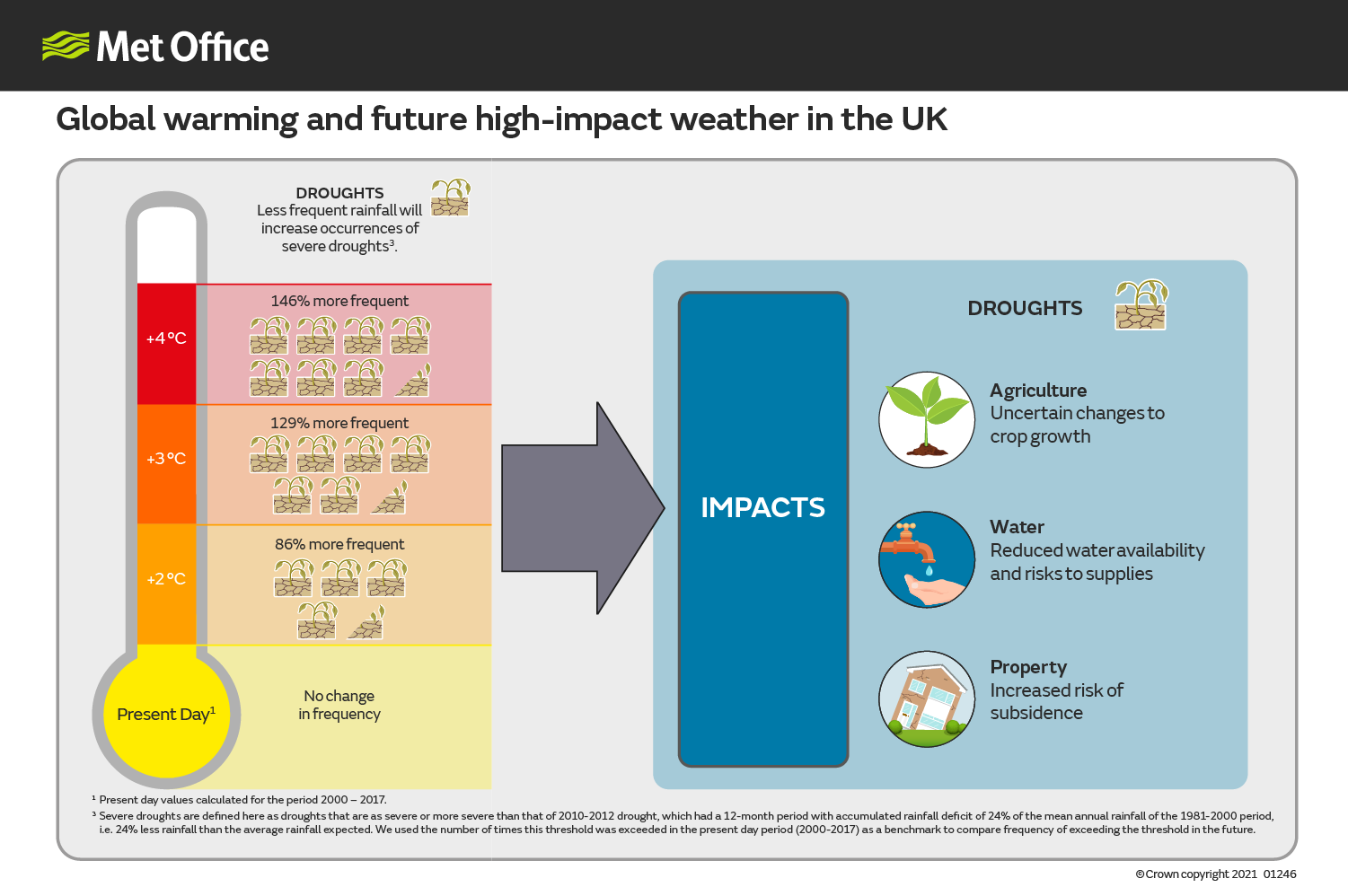 As global temperatures rise, there is a risk drought will become more frequent in the UK. Data available here.

Winters across the UK are projected to get wetter, while summers are expected to become drier. However, it is the distribution of this rainfall that will determine future UK drought risk.

Future projections using high resolution models have suggested that during summer the number of dry days will increase, with heavier rain in between. This may mean changing how water is collected and stored to prevent adverse effects on households and agriculture.

The IPCC’s Sixth Assessment Report (AR6) looked at different types of drought and the likelihood of human influence on them.

There is at least medium confidence that less precipitation has been observed across significant parts of Africa and South America.

Across each continent there is evidence much of Africa, western North America, the Mediterranean and central western Europe, southern Australia, and eastern Brazil are observing more agricultural and ecological droughts. More hydrological droughts have been observed in the Mediterranean (high confidence) and Western Africa, East Asia, and Southern Australia (medium confidence).

There is still low confidence that human influence has affected trends in meteorological droughts in most regions. However, there is medium confidence human influence has contributed to the severity of certain events with more detailed studies. There is also medium confidence that human-induced climate change has contributed to increasing trends in the probability or intensity of recent agricultural and ecological droughts.

It is more difficult to separate influences for hydrological drought because water use and land changes also affect water levels.

The IPCC AR6 has reported that the areas affected by drought will increase in size with higher global temperatures. Even if warming is stabilised at 1.5–2.0 °C several regions are expected to experience more frequent and severe droughts.

Regions that are already suffering from a lack of rainfall are expected to further worsen. Under a high emissions scenario, regions affected by meteorological, agricultural and ecological drought could expand as far as Central America and the Caribbean, most of South America, most of Africa, the Mediterranean and central eastern Europe, and southern and eastern Australia. Only a small number of regions are expected to experience a reduction in meteorological drought.

Hydrological drought is most likely to affect regions that rely on snowmelt or are downstream of melting glaciers. However, due to large amounts of uncertainty it is difficult to predict with confidence how river flows will change.