The water cycle is a way in which water moves around the world. Without it, nothing would grow and humans would not be able to live.

The water cycle starts in the ocean, where the heat of the Sun turns sea water into vapour, tiny droplets of water which float in the air - this process is called evaporation. Water vapour rises into the sky, and as it cools it turns back into liquid water to make clouds - the process of condensation. The wind blows the clouds over land and they drop their water as rain, sleet or snow. This falls on the land as water, which allows plants to grow and gives us drinking water. Much of the water then flows into lakes and rivers, and is carried back to the sea. Then the process begins again.

The water cycle, also known as the hydrological cycle, is the process by which water travels from the Earth's surface to the atmosphere and then back to the ground again. The sun provides the energy for a continuous exchange of moisture between the oceans, the land and the atmosphere.
This diagram shows the different parts of the water cycle. 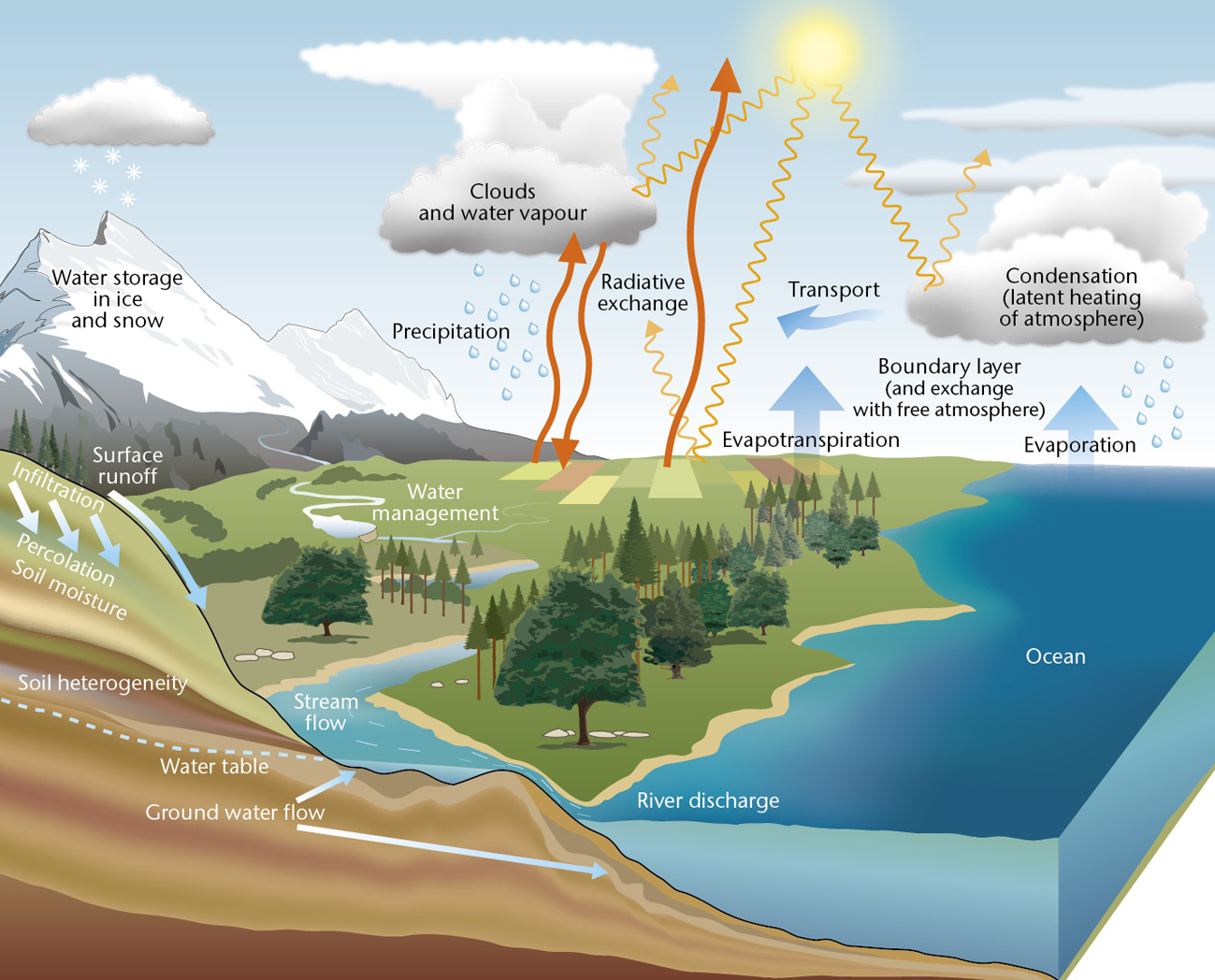 Nearly all (about 97%) of the Earth's water is contained in the oceans. A very small amount is locked away as ice sheets and glaciers. This leaves a tiny amount which travels around in our water cycle, although it may not always seem this way on wet days.

Water enters the atmosphere as water vapour through evaporation, transpiration (when water vapour is released from plants) and sublimation (when ice or snow turn into water vapour without melting into water first). Water vapour high in the atmosphere forms into clouds through condensation. Water eventually returns to earth through precipitation as rain, snow, sleet and hail. When precipitation occurs over land, some water seeps into the ground as groundwater, a small amount is taken up by plants and animals, and the rest will return to rivers and streams as surface run-off to begin its journey back to the oceans.

Surface run off is the precipitation that falls on land and flows downhill towards stream channels which join rivers and eventually reach the oceans. Only about one third of precipitation falling on land will return to rivers and oceans. The rest will be soaked into the soil as groundwater, evaporated or transpired.

An aquifer is a layer of water soaked sand, soil, stone, silt or clay underground. Aquifers act as huge underground water storage systems which people all over the world rely on for fresh water.

Some of the water from precipitation will soak into the soil and rocks as groundwater. A varying amount of groundwater stays in the shallow soil layer, and will move slowly towards streams and rivers. When groundwater soaks deeper into the soil it refills the underground aquifers, where it can stay for long periods of time or be used by humans by drilling wells into aquifers.

A change that can be undone or reversed. Energy is required for a material to change state and whilst it may change in appearance, it will still remain the same material. Melting, freezing, boiling, evaporating and condensing are always reversible changes and can be reversed by heating or cooling.