Determining the likelihood and severity of extreme events for the past, present and future 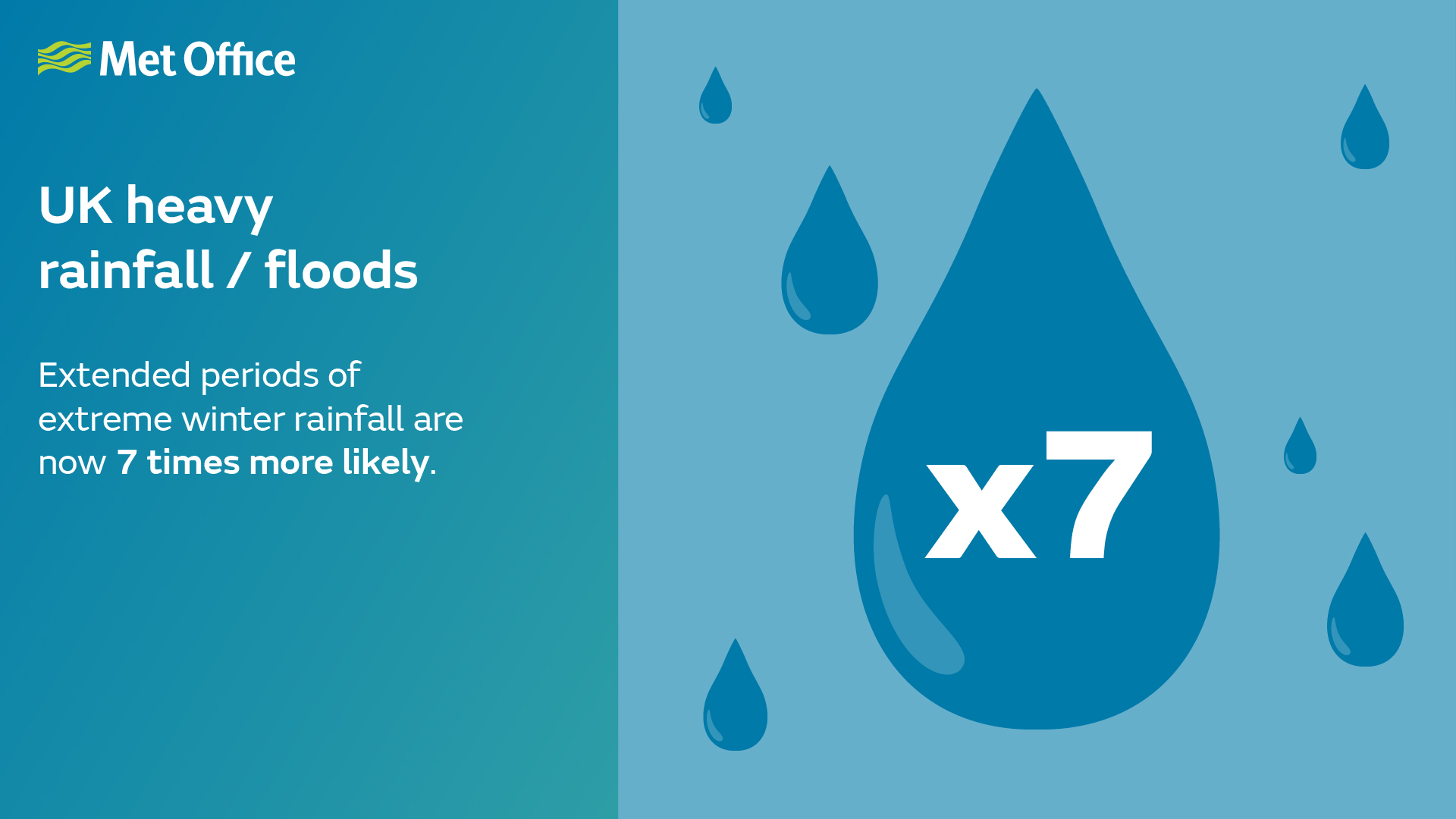 Are we experiencing more heavy rainfall and flooding events?

Several indicators in the latest UK State of the Climate report show that the UK’s climate is becoming wetter. For example the highest rainfall totals over a five day period are 4% higher during the most recent decade (2008-2017) compared to 1961-1990. Furthermore, the amount of rain from extremely wet days has increased by 17% when comparing the same time periods. In addition, there is a slight increase in the longest sequence of consecutive wet days for the UK.

The change in rainfall depends on your location – for example, changes are largest for Scotland and not significant for most southern and eastern areas of England.

Is human influence on the climate increasing the chance of heavy rainfall events?

One study found that climate change has increased the risk of floods in England and Wales, such as those in Autumn 2000 (the wettest Autumn on record), by at least 20% and perhaps 90%*.

More recently winter 2013/14 and winter 2015/16 have been the two wettest on record, with widespread impacts during both seasons. A Met Office study has shown that an extended period of extreme winter rainfall in the UK, similar to that seen in winter 2013/14, is now about seven times more likely due to human-induced climate change **.

December 2015 was the wettest December, and indeed any calendar month, in the UK series since 1910. Rainfall reached 2 to 4 times the average in the west and north, with severe flooding in Cumbria in particular. A recent study showed that the heavy rains associated with Storm Desmond has been made about 60% more likely due to human-induced climate change.***

Are heavy rainfall and flooding events going to continue to increase in the future?

UKCP18 shows a trend towards wetter winters and drier summers on average in the UK, with regional differences.

Work using a high resolution climate model, which can capture localised thunderstorms which are more important in summer for considering flash flooding for example, shows that the intensity of rainfall is expected to increase in future summers****. This suggests that summers may tend to become drier overall but when it does rain it will fall in heavier bursts, which has implications for flash flooding.

Flooding events are more difficult to understand as they depend not only on the amount and intensity of rainfall but local topography and geology, for example.

**  Christidis, N et al. 2015. Extreme rainfall in the UK during winter 2013/14: The role of atmospheric circulation and climate change. Explaining Extreme Events of 2014 from a Climate Perspective.