The GC-MD is a gas chromatograph with multiple detectors, including a mercuric oxide (HgO) detector to measure hydrogen (H2) and carbon monoxide (CO), and an electron capture detector (ECD) to measure nitrous oxide (N2O) and sulphur hexafluoride (SF6). One sampling module directs samples into two separate loops of fixed volumes. The air in these loops is simultaneously injected onto two sets of columns within the GC oven: one set in the GC oven for separating SF6 and N2O and one set in the GC oven of the reduction gas analyser (RGA) to separate H2 from CO followed by detection using the mercuric oxide detector. Two GC-MDs are used within the UK DECC network: one is located at Mace Head (MHD) and the other at Tacolneston (TAC).

The RGA (RGA3 or Peak Perfomer 1, Trace Analytical, Inc., California, USA) is the system optimised to measure H2 and CO.

Collected gas samples are flowed through a custom made, temperature and pressure controlled sampling module known as the MD (multiple detector), before collection in a 1 ml sample loop. Prior to separation samples are dried using a permeation Nafion drier (Permapure, USA). The nafion dries air samples by purging dry air in the opposite direction to the air sample with a water permeable membrane between them. The water in the air sample is removed across the membrane and vented out into the lab with the counterpurge gas. Gas samples are introduced via electrically actuated gas sampling valves and separated chromatographically within an isothermal mandrel-heated column. Eluted compounds travel directly to the detector which contains a heated bed of mercuric oxide. Following its reduction to mercury vapour (Hg(v)) by reducing gas X as follows,

the resulting vapour is quantitatively determined by precision UV photometry downstream of the reaction bed. The detector outlet flow passes through a colour-indicating filter for mercury removal before venting.

The RGA is a commonly used instrument for making continuous long-term measurements of both H2 and CO due to its low consumption of inexpensive carrier gas (zero-air) and the low maintenance required. With continuous use the RGA mercury lamps only require replacement every 4-6 months and a zero-air generator can be run continuously.

However, a drawback of the RGA is the detector's non-linear response to increases in concentration of both H2 and CO. For example when the concentration of CO doubles the response of the detector may be 1.8 times that. To correct for non-linearity a high concentration standard, of accurately known concentration, must undergo serial dilutions, each of which are run through the RGA to produce a calibration curve. A quadratic fit can be made through the calibration curve which is then used to correct data for non-linearity. The plot below shows the differences between data that has not been corrected and has been corrected. 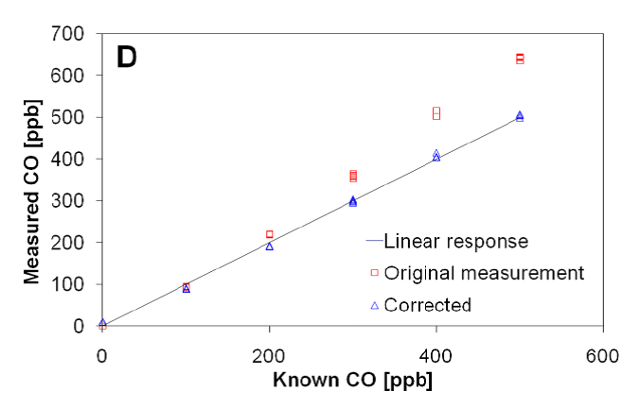