New IPCC report finds that many climate-related risks are higher than previously thought, concluding that “climate change is a threat to human well-being and the health of the planet”

How does IPCC consider risks of climate change?

We know that climate change is happening and is affecting all areas of the world – so how does climate science help us understand the risks that this presents to human societies and ecosystems?

The Intergovernmental Panel on Climate Change (IPCC) Sixth Assessment Report (AR6) aims to assess risks arising from climate change. These result from changes in climate-related hazards, such as droughts and floods, but also consider the exposure and vulnerability of the affected human or ecological system.

As part of this assessment the IPCC considers five broad categories of risk known as “Reasons For Concern” (RFCs) and how these risks progressively grow with climate change. Back in 2001 the IPCC’s Third Assessment Report first showed these Reasons For Concern, highlighting how higher levels of global warming lead to progressively greater risk of adverse impacts across multiple sectors grouped as follows:

Making this assessment is the role of the IPCC’s Working Group II: Impacts, Adaptation and Vulnerability. These Reasons For Concern have been updated and are presented in the new IPCC WGII Sixth Assessment Report. The key assessments are presented in the report’s Summary for Policy Makers, while full details can be read in chapter 16, “Key risks across sectors and regions”.

The new assessment finds that for a given level of warming, many climate-related risks are higher than previously assessed. Compared to the Fifth Assessment Report (AR5), there is high confidence that all five Reasons for Concern are shown to increase to high or very high risk levels at lower global warming levels than previously thought. Additionally, the world has continued to warm since AR5 therefore bringing these risks even closer.

This article explains the process of risk assessment which has enabled the new findings and specifically describes the steps behind assessing RFC5 (“large scale singular events”) as an example.

How did the assessment take place?

The updated RFCs are based on expert elicitation with input from over 110 authors from almost 40 countries.

The process forms an expert consensus across each RFC on the global warming level at which the risk transitions from low (“undetectable”) to “moderate”, “high” and then “very high” levels – as described in the report’s table 16.7.

It has become common to visualise these risks through figures known as glowing embers which shows how certain risks, or categories of risk, transitions from cooler (white) to warmer (red/purple) colours for higher global warming levels.

The expert elicitation is based on findings published in peer-reviewed literature, and the assembly of multiple lines of evidence for each risk at each warming level. Where there is stronger or more robust evidence, the assessed confidence is higher. Where there is less available evidence then assessment is still possible, but is presented with lower confidence.

RFC5 focuses on large-scale singular events which are sometimes called tipping points or critical thresholds. They comprise abrupt or irreversible changes in aspects of the Earth system such as sudden loss or dieback of the Amazon forest, collapse of ice sheets leading to accelerated sea-level rise, or loss of ecosystems such as coral reefs.

In AR5, the boundary between undetectable and moderate risk for RFC5 was assessed to be between 0.6-1.6°C above pre-industrial levels with high confidence, with the transition between moderate and high risk at 1.6-3.6°C with medium confidence. The literature available at the time did not allow AR5 to assess the boundary between high and very high risk.

IPCC’s Special Report on Global Warming of 1.5°C (SR15) provided new assessments of the potential collapse of the West Antarctic ice sheet initiated by marine ice sheet instability, lowering the upper end of the transition from undetectable to moderate risk to 1°C above preindustrial, and lowering the upper end of transition to high risk to 2.5ºC. Transition to very high risk was assessed in SR15 at lying above 5ºC in light of growing literature on ice sheet contributions to sea level rise.

Met Office scientists contributed to the expert elicitation with particular input to the risk of substantial loss of the Amazon forest. Here we illustrate the process of considering evidence and arriving at an assessment.

What is the issue being assessed?

What is the current situation?

What changes are projected to occur?

What are the assessed levels of risk?

Combining similar evidence of different large scale singular events, with focus on ice sheets, Amazon Forest, and coral reefs, IPCC AR6 concludes that the transition from undetectable to moderate risk for RFC5 is now assessed with high confidence to occur between 0.7°C and 1°C warming above pre-industrial. The boundary between moderate and high risk is assessed with medium confidence to lie between 1.5°C and 2.5°C and the boundary between high and very high risk to lie between 2.5°C and 4°C, but with low confidence due to uncertainties in the projections of sea level rise at higher levels of warming.

What is the new assessment of the Reasons For Concern?

The five Reasons for Concern have been systematically updated (figure 1). All show assessed transitions between levels of risk occur at lower levels of global warming than in previous assessments. Increased evidence has enabled generally strengthened confidence levels to be applied to the assessment, including the fact that now all five RFCs are able to quantify a warming level associated with the transition to “very high” risk, which was not possible at the time of the last assessment. 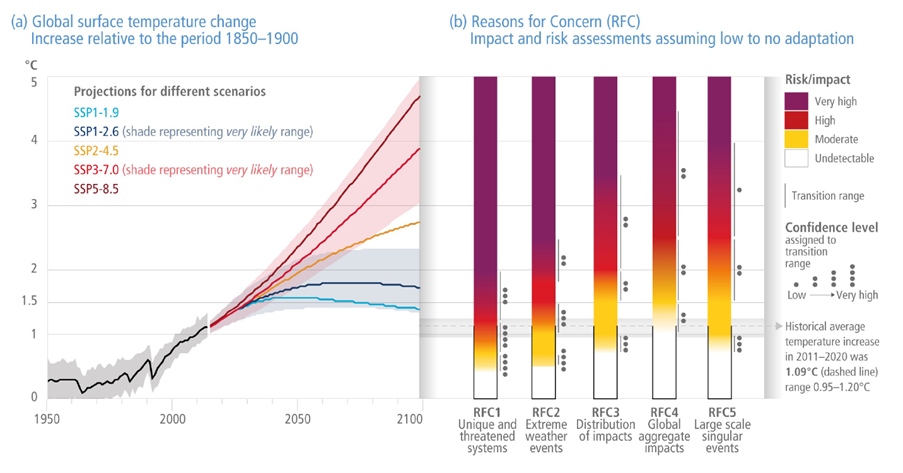 Figure 1. Summary of reasons for concern. Taken from IPCC WG2 AR6 figure SPM-3. (a) Global surface temperature changes in °C relative to 1850–1900; (b) The Reasons for Concern framework communicates scientific understanding about accrual of risk for five broad categories.

The AR6 report notes the importance of the large amount of literature published in recent years in informing these improved assessments of future risk. In particular, for each RFC:

Risk quantification forms a crucial part of the IPCC cycle of assessing possible futures. This enables assessment of mitigation options, and requirements for adaptation. We know that the climate is already changing and some adaptation is required, with further changes to come dependent on our future ability to reduce greenhouse gas emissions. The report tells us that, “With increasing global warming, losses and damages will increase and additional human and natural systems will reach adaptation limits.”

By linking the degree of risk to warming levels the new IPCC WG2 assessment enables quantification of the level of risk to which the world is being exposed and informs the urgency for reducing our emissions to meet the goals of the Paris Agreement: “climate resilient development prospects are increasingly limited if current greenhouse gas emissions do not rapidly decline.” But the report also stresses that multiple benefits for human well-being and planetary health can be achieved by implementing adaptation and mitigation together.

Assessing risk is crucial to inform the urgency of mitigation efforts. As the report concludes, “The scientific evidence is unequivocal: climate change is a threat to human well-being and the health of the planet”- it is increasingly clear that there are much greater and more rapidly increasing risks of severe damage the greater we allow the climate to warm. Many thresholds in risk will be exceeded as warming increases beyond 1.5 and 2°C. It is clearer than ever that every increment of warming matters, and therefore there is renewed urgency to reduce our greenhouse gas emissions at or beyond rates already pledged by the world’s governments. Further delay in such action “will miss a brief and rapidly closing window to secure a liveable and sustainable future for all.”