Observations made primarily for the purpose of providing information on the present state of the atmosphere and for weather forecasts are termed synoptic.

The network of land surface stations where a full set of synoptic observations are made routinely is shown in the image below. 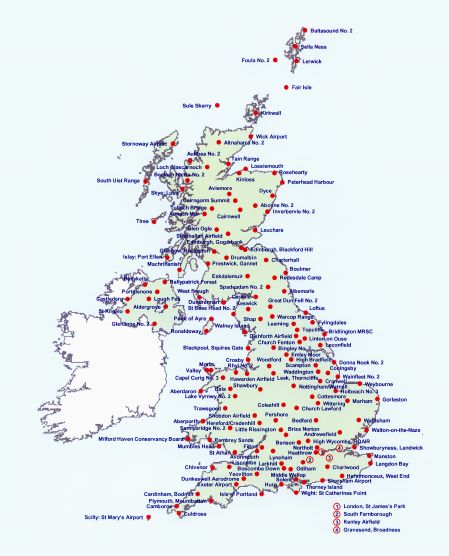 These are the main land surface observing stations over the UK, but they are not the only ones. There are in addition supplementary stations which provide a more limited range of data to meet specific requirements, for example climate requirements, measurements of temperature and/or wind at a customer's site, and a dense rainfall network to aid water management and flood forecasting.

The distribution of synoptic stations shown on the above map is approximately uniform ensuring that as few weather features as possible escape detection. The average separation of stations in this network is about 40 km enabling the weather associated with the typical low pressure and frontal systems that cross the UK to be recorded. Some weather features occur on smaller scales (for example thunderstorms) and may evade the surface network altogether. For the detection of these satellites and weather radars play an important role.

Observations made at synoptic stations should represent the wider area around the station and not be unduly influenced by local effects. The ideal site should be on level ground with no trees, buildings or steep ground nearby that might influence the measurements. Undesirable influences include the warming effect of buildings on the measurement of temperature and the sheltering or shading effects of trees on the measurement of sunshine and wind. Wherever possible, a station should not be located in a frost hollow where overnight temperatures on still clear nights may be far lower than at neighbouring locations. In a similar way, winds measured at the top of a hill or steep escarpment will be unrepresentative of the wider area.

With few exceptions, the following meteorological elements are measured at all synoptic stations:

The measurement of almost all the elements on the list is fully automated; data are logged at the station, processed to convert the measurement to a meteorological element in standard format, and transmitted to a central collecting system based at the Met Office's headquarters at Exeter.

Each station produces observations at minute intervals and the central database at Exeter contains a large store of minute data from all UK stations. For many purposes this volume of data is too much to handle.

For a great many years the standard observing time for synoptic purposes in the UK and for international exchange is hourly, i.e. each station reports 24 observations a day at 0000, 0100, 0200, ... 2200 and 2300 UTC. The central system at Exeter generates hourly observations encoded in internationally agreed formats for onward transmission in real time to users worldwide.

Recent hourly observations may be found on the Met Office's website: Last 24 hours

Although most of the observing process is automated today there are some synoptic stations where a trained meteorological observer provides some input into the observation. Usually this occurs at airfields where aviation authorities require manual oversight of those elements vital for aircraft safety, namely cloud, visibility, wind, present weather and pressure. A trained observer can provide estimates of those elements that are hard to automate, for example visibility, cloud type, cloud amount and state of ground. As there are no sensors to identify cloud type or state of ground these elements are not available from automated sites.