How forecasters bring weather to life

The forecast is much more than some text and symbols, our experienced forecasters bring it to life to help you better understand the weather.

From appearing on Celebrity Mastermind and The Great Sport Relief Bake Off to presenting the weather on Channel 5 and Facebook Live – life for Alex Deakin, is as varied as ever. 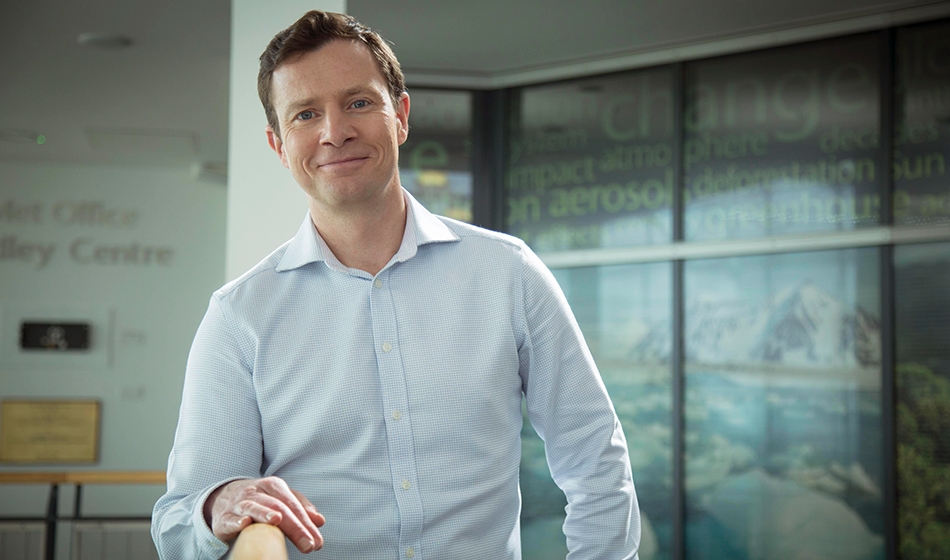 It was while studying astrophysics at Birmingham University that Alex’s interest in the weather and climate was sparked. After graduating in 1997, he joined the Met Office’s meteorology training scheme. “It fitted me perfectly,” he recalls, “a case of moving on from studying the atmospheres of other planets, to going back to Earth.”

One of his earliest jobs was at ITV, preparing graphics and briefing the presenter, Sian Lloyd. The broadcasting side of things took off following a chance encounter in 1999 at a film premiere for The Perfect Storm. It was there that he met the head of BBC Weather, Helen Young, who invited him to a nerve-racking – but successful – screen test. For the next sixteen years, Alex went on to become one of the BBC’s most popular weather reporters.

“We never read off a script,” says Alex. “The graphics are your prompt. When I’m training presenters today, I emphasise how crucial the first ten seconds of your delivery are in capturing someone’s attention.”

Alex admits that being surrounded by scientists at the Met Office can sometimes make it tricky to switch into ‘presenting mode’ to communicate complex information to viewers without using technical terms.

“I imagine that I’m talking to a friend – so phrases like ‘occluded fronts’ become ‘it’s a grotty, old day’. And I’ll throw in some dramatic-sounding adjectives to peak people’s interest and keep them watching. You could say that’s my ‘trademark’ style.”

On leaving the BBC in 2016, Alex joined the Communications team at the Met Office to work in its new broadcasting suite. It’s here that, surrounded by high-tech wizardry, he creates weather forecasts for the Met Office national weather forecast, the British Forces Broadcast Service and Facebook Live. As the Met Office’s latest social media channel, Facebook Live’s fun, ad hoc format is proving very popular – especially with the younger viewers who prefer their information snack-sized.

Alex might present the weather in the studio or film outside during a frosty morning. He even put 14 love songs into a Valentine’s themed forecast. But whether he’s describing a weather bomb on his Twitter feed, or interviewing the Chief Forecaster in the Operations Centre, it’s clear that social media is gaining ground as a forecasting platform.

“It’s great for people to access all the in-depth information available,” Alex explains. “We’re hoping Facebook Live branches out into a Q&A format, perhaps on topics such as pollen and UV levels.”

Along with his presenting role, he is also creating forecasts using Visual Cortex – the Met Office’s new graphics system.

“It’s mind-boggling having so much computer power at my fingertips. In the old days, one weather symbol might represent 300 square miles. Now I can display the atmosphere, 30,000 feet up, before swooping down through the clouds onto details like towns and rivers.”

Despite all the technology at his disposal, Alex – in his own words – tries not to be like a ‘kid in a sweetshop’ and avoids adding too many confusing visual layers. It’s always a matter of considering the range of devices people might be using to view forecasts – and adapting accordingly. So while a jet stream graphic might look brilliant on a 64” plasma screen, it’s not going to work well on a smartphone.

With so many current leaps in science and technology, Alex feels he’s returned to the Met Office at a very exciting time.

“This is the start of something big. We must stay open-minded about where technology is taking us. Like the weather, you need to keep a close eye on what’s coming up next.”