Find out more about Ben's role as a radar software engineer 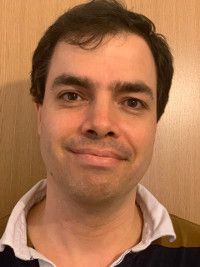 Why did you want to work at the Met Office?

Well, it’s the Met Office! We pull measurements of weather together from all over the world, pop them into a giant computer and use that to work out what the weather’s going to do. How cool is that?! Also, we’ve got lots of different roles in areas I think are interesting, including climate science, software engineering and various overlapping roles in between, and you know you’re doing something both good and useful.

What do you do day-to-day?

Mostly I write or improve the software that runs at the weather radar sites and controls the radar hardware – how fast the dish spins, what frequency it transmits at for how long, that sort of thing. I have to be careful because even quite an innocuous bug in the software could shut the radar network down if it wasn’t spotted in time.

What are the most exciting things you get to do?

I’ve been up a couple of the radar towers, those are pretty nifty. Good views because they’re all on a big tower on top of a hill, and the radar inside is a high-tech piece of kit.

What do you love most about your job?

Watching software I’ve written make the radar do something new and useful.

Which skills did you have to develop and use to do your job?

I guess software engineering is the main one. It’s computer programming, but coupled to knowing how to do things the “right” way to make the software as robust and easy to maintain as possible. Learning to program is easy. Learning to program well, less so. Having a logical mind and a scientific bent helps too, both for working out how to get the code to do what you want and for understanding why we want the radar to do what I’m trying to make it do.

What does your job involve that people might not expect?

Programming is basically problem solving. I want the computer to do X, why isn’t it doing X now and what do I need to change in what order so that it does do X? Sometimes it feels like working on a giant sudoku puzzle or something like that. If you like puzzles, chances are you’ll like programming, I would say.

What subjects did you enjoy at school?

I was good at quite a few that are relevant (maths and physics are obvious candidates), but I think most of the ones I actually enjoyed had little or no bearing on this job. I did IT GCSE, but honestly that’s only occasionally relevant, and I didn’t do it at A-Level. My favourite subjects at school were probably biology, chemistry and history, and it’s rare I touch on any of those. But I was good at maths too, and that’s definitely useful.

What are your hobbies?

I’m an avid computer gamer, and that’s how I got into programming in the first place – I wanted to go and work in the games industry. Later I decided that was a bad idea, but I still became a programmer. I also love reading, and once upon a time I was into scuba diving, though I haven’t done that in years.

What did you study at college or university?

As mentioned, the most useful thing at school was maths. Then I did Computer Science at university, which was definitely useful. I spent four years working as a general programmer out of university, which embedded the software engineering, then I went back to uni and did a masters degree in Oceanography. The combination led to me working in remote sensing (satellite and airborne) data services in a research laboratory for a while, which gave me a good grounding in both how science works and in writing software for use in operational environmental services.

There are a lot of good programmers out there these days. If you want to stand out, have something else with it. For me that’s the environmental data angle. If I was just starting out though I’d want to have side projects of my own that showcased some things I’d done with my computing skills just because it was useful or interesting or fun. Make employers see how much you enjoy playing around with computers, because if you’ll be enthusiastic for yourself then you’ll be enthusiastic for them, and the ones worth working for will know it.