A heat wave affected most of the UK from 3 to 23 July 2013, making this the warmest and sunniest July for the UK as a whole since 2006, and the third warmest on record. 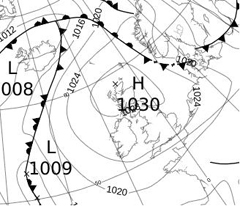 High pressure generally results in a stable atmosphere and settled weather, and in the summer this can lead to warm temperatures. In July 2013 high pressure became established over the UK for much of the first two-thirds of the month. 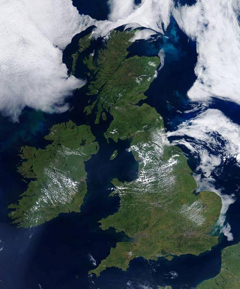 The visible satellite picture of the British Isles from 19 July 2013 - a photograph taken from a satellite orbiting at an altitude of around 800 km. What is notable about this particular image is the amount of the UK without cloud cover. There is unbroken sunshine across much of the UK. You can also see smooth edged cloud on the coast of East Anglia and to the west of Scotland. This is low cloud called stratus, a typical cloud formation that occurs where moist air at low altitudes is cooled to the point that it saturates. When its base is near the surface, it becomes fog. During July the easterly winds often brought stratus inland along the east coast, so it did not get quite as hot here.

What caused the hot weather?

The seeds of the July hot spell were sown in June. Although June 2013 was not an exceptionally warm month, it was the lack of rainfall that was important. Because the ground was dry, it quickly warmed up in any strong July sunshine and in turn transferred the warmth to the air above it.

A weak cold front moved south-east across Britain during the 4th, with pressure building to the rear so that an area of high pressure formed over southern Britain on the 5th. Apart from some patches of low cloud near eastern coasts, inland there was hardly any cloud to stop the strong July sunshine from heating up the dry ground and therefore warming the air above it. The light winds also meant the heat didn't disperse.

The hottest day was on the 22nd when the temperature reached 33.5 °C at Heathrow and at Northolt, both on the west side of London. By this time the airflow was blowing in from the south-east. Temperatures over northern France were as high as 30-35 °C in the days leading up the 22nd, and this very warm air transferred slowly into south-east England. A combination of dry ground, very warm air imported from northern France, a build up of heat from the previous days, and the fact that the south-east flow enabled the already warm air to travel over the built up area of London and heat up a little more, led to the high temperatures recorded on the west side of London. The hot spell broke down between the 22nd and 23rd as some heavy thundery rain spread from the west.

In a historical context, this hot spell was not particularly unusual. The length of it was the more notable feature, especially when put in the context of the run of rather changeable summers since 2007. This was the most significant heat wave since that of July 2006 (also dominated by high pressure and preceded by a dry June).

Getting the message to people 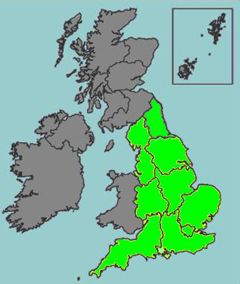 The Met Office's Heat Health Watch Service is designed to alert customers and the general public to the likelihood of heat wave conditions in different government regions of England, shown on the right hand side in green:

There are four levels of the watch; one of the four levels will always apply from 1 June to 15 September each year. There are set daytime and overnight temperature thresholds which vary for each region. If there is a high chance (greater than 60 per cent) that these values will be reached on at least two consecutive days and the intervening night, then a higher watch level will be triggered.

The Met Office has several of its own Twitter accounts (@metoffice; @metofficewarnings; @metofficenews) that are manned 24 hours a day, seven days a week. They not only respond to weather questions posted by the general public but also make people aware of the general weather forecast and any warnings that may have been issued by forecasters. This includes the Heat Health Warning Service, and several times during the July heat wave the @metoffice Twitter account was used to tell users about any current Heat Health alert levels for any of the nine regions.

The July 2013 heat wave had both positive and negative impacts on people.

In the UK we are not used to such prolonged spells of warm weather, so it can be bad for people's health, particularly for high risk groups such as young children and the elderly.

The hot, dry weather also raised the risk of fire, and there was a spate of wild fires in London as well as blazes elsewhere.

But these negative impacts should not take away from the generally buoyant mood that the warm, settled weather created, and the boost to tourism. The south-west of England, a tourist hotspot, had over 300 hours of sunshine during July.